The Zags cruised past Farleigh-Dickinson 87-49 as Rui Hachimura led five players in double-figures with 21. Gonzaga led 53-17 at the HALF…an NCAA Tournament record for most-points scored in one half of basketball.
Gonzaga will face Baylor in the second round tomorrow at 4:10 after the Bears beat Syracuse 78-69.

Coming up today, the Washington Huskies and Utah State play at 3:50 on TNT.

The series is tied at 2-2 after the teams split two games in Wenatchee and two games in Duncan, B.C. The puck will drop tonight at 7:05 in the Wolve’s Den.

After tonight, the teams will head back to the southern tip of Vancouver Island for Game 6 on Sunday. Then, if necessary, Game 7 is back in Wenatchee on Tuesday night.

If you missed Game 2 of the series from last weekend, you can watch it tonight on the NCWLIFE Channel beginning at 7 o’clock.

In tennis, Wenatchee swept Moses Lake 7-nil on both the girls and boys side. The Ephrata girls nipped Cascade 3-2.

And in boys soccer, Cashmere beat Omak 4-1 and Cascade shut out Toppenish 1-nil.

By sun or by chopper, fields are becoming snow-free 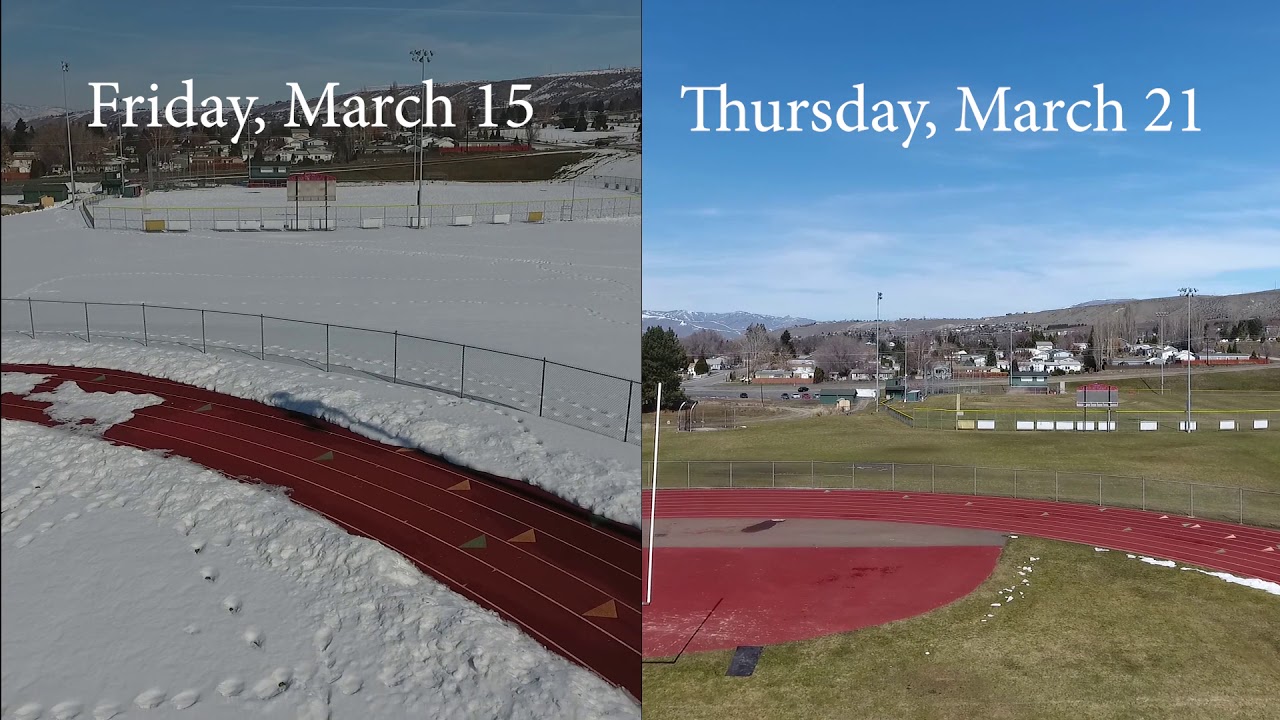 This is drone footage shot by our own Uriah Darby of Eastmont’s Stadium, track, soccer field and then over to Dan White Field. On the left is the footage from last Friday, just a week ago. On the right is the footage from yesterday. Even though the snow is gone, it’s going to take another few days to dry things out enough to play on.

In the meantime up in Waterville…

They’re resorting to extreme measures to try to clear their baseball and softball fields. Thanks to Kimberly Gormley for the video of a helicopter apparently spreading fertilizer to melt the snow and ice. Kimberly posted with the video that they HOPE to play before the end of the season.

Coming up on the Prep Schedule, first in baseball…

Eastmont and Wenatchee WILL play their doubleheader today. It was scheduled for Dan White Field, but instead will be in Recreation Park. The Wildcats will be the “home” team with the first game beginning at 4 o’clock.
Coming up tomorrow, Manson hosts Oroville in a doubleheader at 11. That’s the same start time for Waterville-Mansfield at Tonasket with a twin bill. Cascade is at Sultan tomorrow at Noon for the first of two games against Clover Park. Chelan travels to Quincy for a single game at 1. And, the snows have finally cleared at Cashmere, so the Bulldogs will host Liberty Bell at 1 o’clock.

On the softball diamonds…

Today, it’s Ephrata at Chelan for two games starting at 3:30. Quincy hosts Cascade in a single game at 4:30. Tomorrow, it’s Cashmere at Omak; Okanogan hosting Cascade; Oroville at Manson; and Waterville-Mansfield at Tonasket. All those games are doubleheaders and all begin at 11am.

There will be soccer both tonight and tomorrow…

Eastmont takes its unbeaten record to Davis tonight at 7 o’clock. Wenatchee will try to bounce back from Tuesday’s loss to West Valley with a game at Lee Bofto Field at the Apple Bowl tonight at 7 against Eisenhower.
Coming up tomorrow, Cascade travels to Wahluke while Chelan hosts Zillah at 11am. Eastmont has a tough road trip at Chiawana tomorrow afternoon at 1.

Wenatchee lacrosse home and away

They’ll host Southridge in a non-league game tomorrow at the Apple Bowl at 4:30. Then on Monday, the Thunder will travel to Hanford for a league game at 7pm.

Cashmere hosts Tonasket today at 4. Then tomorrow, Chelan and Moses Lake are in Selah for the Viking Invite beginning at 9am.

Track teams to compete this weekend

But there will be other meets tomorrow. Chelan and Cascade will be with a bunch of other teams in Ephrata for the Ray Cross Invitational beginning at 10am. Eastmont will be in the Spokane area for the Central Valley Bears Invite at Whitworth beginning at Noon.

Skyhawks head to Idaho for season-opener

Shortly after training camp begin earlier this month, Keith Evans’ title of Head Coach and General Manager was reduced to just Head Coach as owner Theo Hall took over the GM duties. Then, Mickey White left the team as its Assistant Coach and Marketing person. Mickey’s wife Susanna also left the team, leaving as its Director of Operations, Ticket Coordinator and Cheer Coach. Now, Assistant Coach and Director of Recruiting Takashi Walker has left to take a job in Orlando.

Despite all the shakeups in the front office, Theo Hall tells NCWLIFE Channel the team is “fired up and ready to play” the Idaho Horsemen this weekend…

It is the kickoff weekend in the all-new American West Indoor Football Conference. Tomorrow’s game kicks off at 5 in the Ford Idaho Center in Nampa. The Skyhawks are scheduled to open the home part of its schedule next Thursday in the Town Toyota Center at 7 o’clock against the Reno Express.

Chris Mariscal went 2-for-4 with a 2-run home run as the Mariners won 6-to-3. The Cactus League schedule continues today with Seattle hosting the Angel’s split squad at 6:40 tonight in Peoria.