The Wenatchee Wild head to Vernon, B.C. tomorrow for Games 3 and 4 of their Interior Division Final playoff series, which is all tied at a game apiece…

It began Saturday, with the Vipers skating away with a 4-3 overtime win in Game 1. Wenatchee was down 3-nothing in the 2nd period when the Wild mounted a comeback. PJ Fletcher scored twice within a 4-minute span to cut the lead to one heading into the final frame.

Brian Adams electrified the 27-hundred fans at the Town Toyota Center midway through the third period on his 3rd goal of the playoffs to tie it at 3-3. Regulation would end tied at 3 but just 26-seconds into overtime, Michael Young silenced the home crowd to put Vernon up 1-nil in the best-of-seven playoffs. 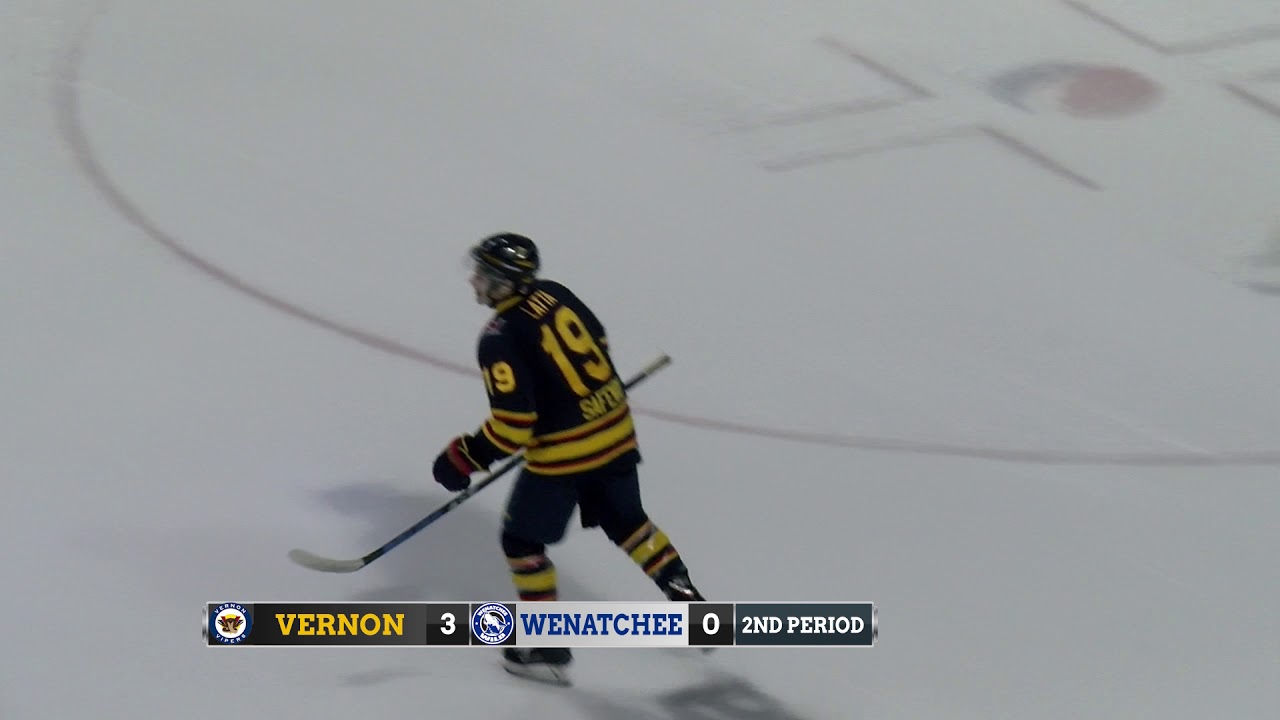 Park and Wild shut out Vernon 3-0

Sunday’s Game 2 would be a much-different affair with neither team scoring in the first period. Jacob Mobry broke the silence in the 2nd with his first goal of the playoffs to make it 1-nothing.

Matt Gosiewski scored a power play goal in the 3rd to back up a brilliant performance in net by goalie Austin Park. The netminder from Highlands Ranch, Colorado turned aside all 26-shots that came is way as he notched his 4th playoff shutout as Wenatchee won 3-0. PJ Fletcher tallied an empty-netter in the final two minutes to make the final score.

Again, Arch Ecker had the call on the Wenatchee Wild Hockey Network… 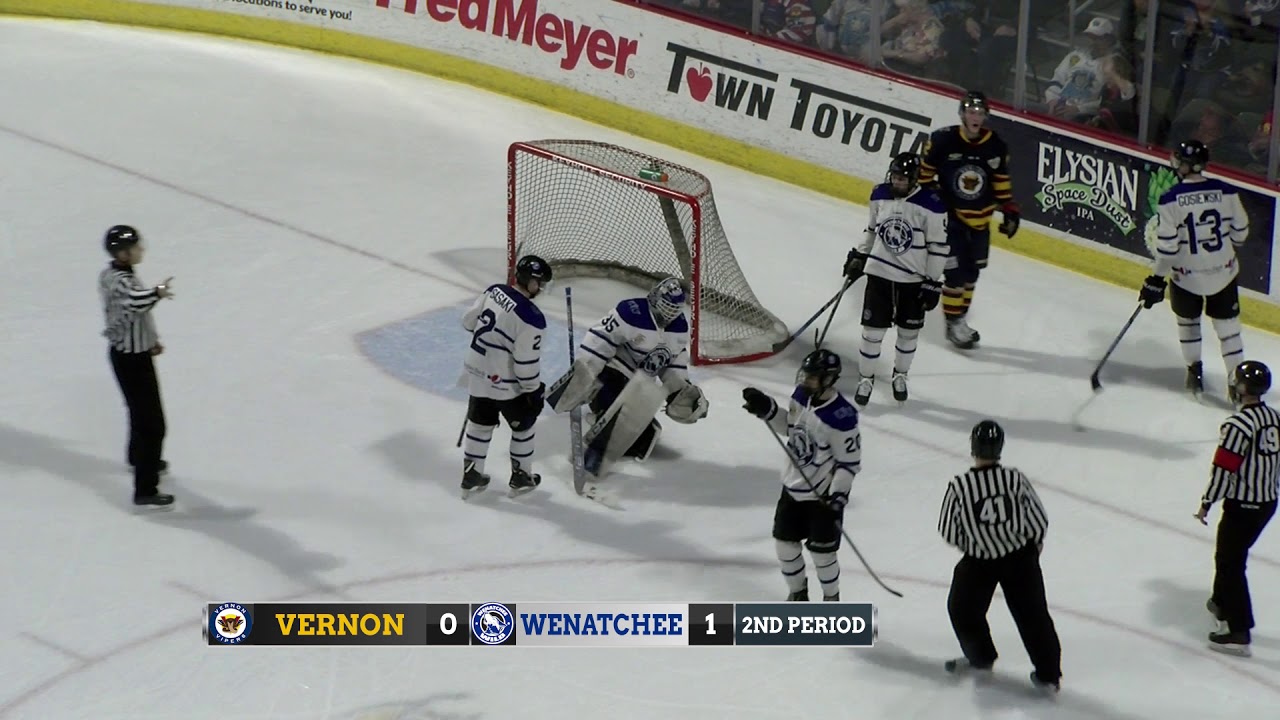 So with the series tied at one-one, Games 3 and 4 are in Vernon tomorrow and Wednesday at 7 o’clock. Game 5 will be back in Wenatchee Friday night, also at 7.

Gonzaga and other #1’s ousted

The Gonzaga Bulldog season came to an end Saturday in the Elite Eight, falling to Texas Tech 75-69…

Zach Norvell, Jr’s put-back with 11-seconds remaining closed the gap to 71-69. Josh Perkins reached over the end line and tipped the ball out of Matt Mooney’s hands and the officials called a technical foul. Tech made the free throws and iced the program’s first-ever Final Four appearance.
Bulldog Coach Mark Few said he had to give credit to Texas Tech for making the plays down the stretch… 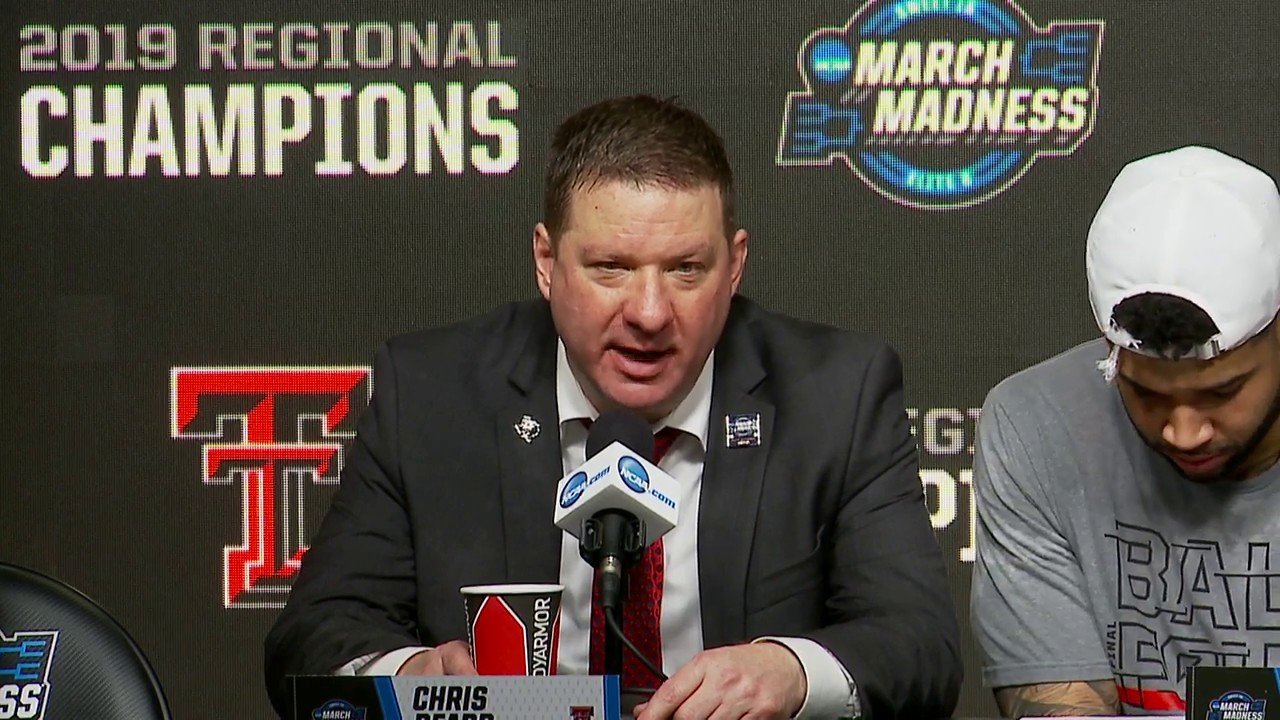 Virginia is the only remaining #1 seed in the Final Four, after the Cavaliers downed Purdue 80-75. Auburn knocked off Kentucky in overtime 77-71. And, pre-tournament favorite Duke was upset by Michigan State 68-67.

In six games so far this season, the Mariners have plated 48-runs on 58-hits with 15 home runs. In six games. Last year, it took twice as many games to reach 15-home runs as a team, and that was with names like Cano and Cruz in the lineup!

The win gave the Mariners 3-wins out of four against the defending World Series Champions and improved its overall record to 6-and-1.

On Sunday, Omar Narvaez went 2-for-5 with a 3-run home run while Dee Gordon went 2-for-4 with 3-RBI’s. Wade LeBlanc earned the victory, going 5-and-a-third innings while allowing 6-runs on 7-hits with one strikeout.
The bullpen has been shaky, to say the least, but the offense has been building big leads so far. Seattle continues its season-opening home stand with the Angels in town for the first of two games tonight at 7:10.

Wenatchee sweeps while Eastmont is swept in baseball doubleheaders

Heading to the Les Schwab Prep Scoreboard from the weekend, first in baseball…

Wenatchee swept a doubleheader from West Valley Friday at Rec. Park 10-0 and 6-0. Moses Lake swept a pair from Eastmont 2-0 and 8-0. And on Friday, Granite Falls nipped Cashmere 7-6.

Turning to Saturday, Ephrata edged Cashmere 3-2. Chelan clobbered Cascade in two games 17-2 and 19-3. And the poor Shockers are still looking for their first run of the season, falling to Brewster 30-to-nothing and 17-zero.

Meanwhile, Sunnyside handed the Panthers its second loss of the season 2-1. So the Grizzlies are in second place while Eastmont’s in 3rd and Wenatchee 4th.

Coming up on the NCWLIFE Sports Calendar this week…

It begins tomorrow night when the Wenatchee Panthers host the Moses Lake Chiefs in Big 9 boys soccer at the Apple Bowl. Sebastian Moraga and Matt Wisen have the play-by-play beginning at 7 o’clock. Then on Thursday, we’ll feature Game 1 between Wenatchee and Vernon in their Interior Division Final playoff series at 7 o’clock. Friday is baseball as Eastmont hosts Sunnyside at 7. Then on Saturday at 7, it’s Game 2 between Wenatchee and Vernon.

You can watch Cashmere’s Regional games on NCWLIFE

Some election envelopes in Douglas County went out with two ballots...