The Wenatchee Wild got back on the ice and back in the win column last night at the Town Toyota Center, downing Cranbrook 3-2 in BCHL play…

After a scoreless first period, Wenatchee got on the board in the second on goals by Travis Bohnet and Ean Samoza. Sean Zears had the call for Hockey TV… 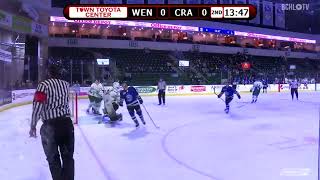 Cade Littler added what proved to be the game-winner 36-seconds into the third and Wenatchee went on for the 3-2 victory.
The two teams play again tonight at 7:05 followed by a road game for the Wild in West Kelowna Saturday at 7.

Kraken down Sharks 3-2 for second-straight win

Make it two in a row for the Seattle Kraken…

Seattle fought back after a sluggish start to beat San Jose 3-2 at Climate Pledge Arena. After falling behind, Carson Soucy (SUE-SEE) lit the lamp twice to put the Kraken up for good… 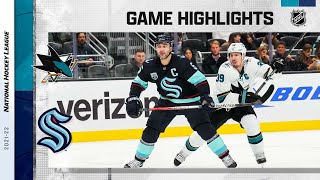 Seattle’s back in the ice tonight at 7 o’clock against St. Louis before hosting Florida Sunday at 6. You can watch the action on ROOT Sports.

Louisville had a complete meltdown in the 4th quarter as N-C State outscored the Cardinals 31-to-8 in the final frame to win 68-59. Hailey Van Lith had 13-points in the game.

Cierra Walker had 15-points to lead Gonzaga past Portland 68-59.

Coming up tonight, Washington hosts Oregon at 7. Tomorrow, Eastern’s at Northern Colorado at 1 while Gonzaga travels to Saint Mary’s.

Louisville is back home against Wake Forest Sunday morning at 11 while the Huskies host the Beavers at Noon. 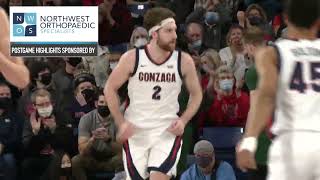 In other action last night, Rylan Bergersen had 15-points as all five Eastern starters were in double-figures as the Eagles beat Sacramento State 75-62.

Washington got 27-points from Terrell Brown, Jr. and 16 from Eddie Matthews, Jr. in an 82-72 win over Oregon State.

Coming up tomorrow, Northern Colorado visits Eastern Washington at 2. Washington State and Oregon State were postponed by COVID. Washington will travel to Oregon Sunday at 7 on the Pac-12 Network.

Wenatchee took care of Eastmont 52-21. They saved the best match for last as Wenatchee’s Vincent Goforth took on Eastmont’s Juan Martinez Gonzalez. We pick it up in the 3rd round with Goforth leading 4-1. Eric Granstrom had the call here on the NCWLIFE Channel…

Moses Lake and Wenatchee earn wins in the pool

In the pool yesterday…

On the girl’s schedule for Saturday, Cashmere hosts Cle Elum at 3:45. Waterville-Mansfield hosts Manson at 4. The Entiat girls visit Liberty Bell at 4:30. Moses Lake hosts Sunnyside at 4:45. Bridgeport travels to Lake Roosevelt at 6.

In boys basketball tonight, Quincy’s at Cascade at 5:45. Tonasket takes on Brewster at 6 while Waterville-Mansfield is at Soap Lake and Manson hosts Liberty Bell. Okanogan and Omak get underway at 7:15 while Cashmere visits Chelan. Ephrata hosts Ellensburg tonight at 7:30.

Finally, the Divisional round of the NFL playoffs are this weekend…

Cincinnati plays at Tennessee tomorrow at 1:30 on CBS. That’s followed at 5:15 by San Francisco and Green Bay at Lambeau Field on FOX.