Wenatchee Police responded to reports of a man shooting at a church in downtown Wenatchee this morning. When the suspect confronted officers, wounding an officer in the leg, police fired upon the individual, killing him. The officer sustained a non-life threatening injury to his lower leg.

According to a release from the North Central Washington Investigation Unit, the incident began at about 8:27 this morning at the Living Hope Community Church on the corner of Chelan Avenue and Palouse Street in downtown Wenatchee. The church is just across the street from Memorial Park, site for most of the Washington State Apple Blossom Festival activities and a block away from the grand parade route. 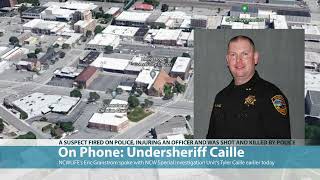 The investigation is ongoing and Undersheriff Caille says the area around this morning’s shooting will be cordoned off until this evening. Anyone with direct information regarding this morning’s incident is asked to contact RiverCom at 509-663-9911.