The District 6 4A Title will be settled tonight at Lee Bofto Field at the Apple Bowl as Wenatchee hosts Eastmont. We’ll have it LIVE on the NCWLIFE Channel beginning a little before 7 with Sebastian Moraga and Neil Oyston on the call.

The Panthers won both meetings with the Wildcats earlier this season, 3-2 in the Apple Bowl and 2-nil at Eastmont. Here’s a look at the highlights from the previous two games broadcast on the NCWLIFE Channel… 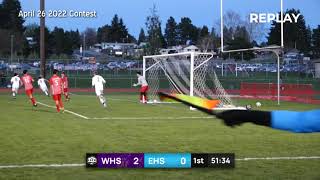 The other district playoff game features Eisenhower at Sunnyside at 6 o’clock. The winner of that game will face the loser of Wenatchee and Eastmont for a last chance at State.

Jackrabbits and Kodiaks advance to regionals with wins

The Jackrabbits blanked Bridgeport 4-nil while Cascade shut out Manson 5-nil in the District Playoffs. In other action, Brewster blanked Cashmere 1-nil while Okanogan got by Chelan 4-1.

The next round will be in Quincy Saturday with Okanogan facing Bridgeport in a loser-out game at 1 o’clock. That’s followed by Brewster and Manson in the loser-out game at 3. Cascade and Quincy will play for the District Championship at 5 o’clock.