Seattle’s most popular player, Brandon Tanev, is out for the season with a knee injury, but that doesn’t mean his not staying busy. He met with the media yesterday and said surgery went well… 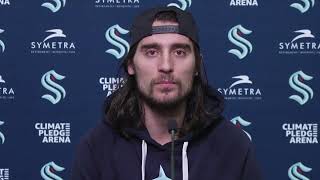 Tanev says now that he’s back on his feet, he wants to be involved with the Kraken any way he can, including reaching out in the community… 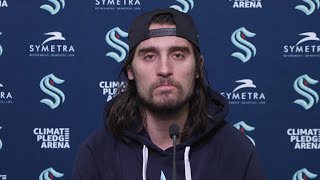 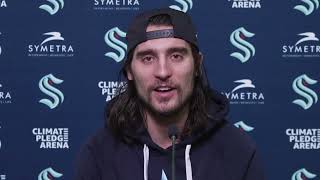 Nashville’s currently third in the Western Division of the NHL at 26-14-and-3. Seattle remains last in the Pacific Division at 13-24-and-4, but have won two of its past three games heading into tonight. The two teams met in Nashville back in October with the Kraken coming out on top 4-3 behind two goals from Brandon Tanev.

They’ll drop the puck at 7 o’clock tonight. The game is only available on ESPN-plus.

Wenatchee had three games fall along the wayside earlier this month due to COVID but will make them up in the later part of March. The Wild will host Penticton on Wednesday, March 23rd at 6 o’clock. They’ll also play at Trail on Friday, March 25th at 7:05 and Cranbrook Saturday, March 26th at 6.

Meanwhile, Wenatchee’s preparing to host the Vees this week at the Town Toyota Center for three games. Thursday and Saturday’s games start at 6 with a 7:05 puck drop on Friday.

Penticton is currently 2nd in the BCHL’s Interior Division at 22-6-zero-and-2. Wenatchee comes into the series in 7th place at 11-12-4-and-1. The Wild and Vees have met twice so far this season with Penticton coming out on top in overtime October 9th 3-to-2 and on December 4th by a final of 5-3.

It was over the final two periods of that game in early December that Wenatchee found its footing. Since then, the Wild have gone 8-and-2.

Wenatchee and Penticton meet Thursday, Friday and Saturday here in town. To get tickets, go on line to www.WenatcheeWildHockey.com.

The Eastern women weren’t as fortunate against Idaho State, falling to the Lumberjacks 69-54. Jacinta Buckley had 17-points to lead the Eagles.

Here’s what is on tap tonight:

The boy’s schedule is just about the same with different start times. Cascade takes on Royal at 7:15 while Omak visits Cashmere and Chelan travels to Quincy. At 7:30 tonight, it’s Tonasket at Manson; Lake Roosevelt at Liberty Bell; Brewster hosts Okanogan; and Oroville travels to Entiat.

There’s also a busy slate of girl’s bowling this afternoon. Starting at 2 o’clock at Eastmont Lanes in East Wenatchee, the Wildcats host Eisenhower while Wenatchee takes on Davis. Then at 3 at Lake Bowl in Moses Lake, the Chiefs host Selah.

On the wrestling mats tonight, Omak hosts Liberty Bell, Manson and Oroville starting at 5:30. Eastmont is on the road at West Valley at 6.