In baseball parlance, you don’t like crooked numbers. 111 is not a crooked number, but it’s also not what you want to see on the thermometer as you begin a game at Paul Thomas, Sr. Stadium.

Portland put up a BUNCH of crooked numbers in last night’s 17-3 pounding of the AppleSox. The first crooked number was a 7 in the second inning. The Pickles brought 13-men to the plate against Wenatchee reliever Tyler Chipman. It got worse from there as we hear from the “Voice” of the AppleSox, Joel Norman… 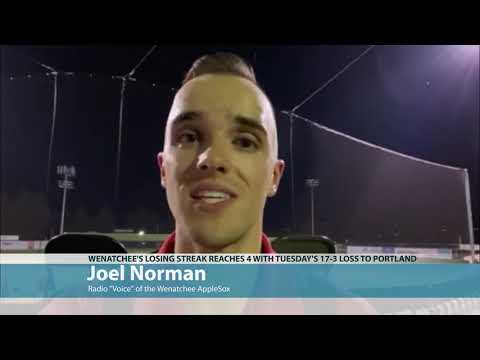 The home run from Newman was the lone bright spot on a hot night at the ballpark for the AppleSox. Portland’s Leo Mosby collected 4-hits on the night while Jakob Jablonski crushed a grand slam home run in a 5-run 5th.
The two teams play again tonight at 7:35 as Wenatchee will try to snap a 4-game losing streak, it’s longest of the season.

Charlie Saum and Luis Aviles had bookend, 3-run home runs for Bellingham in the 1st and 9th innings to help the Bells beat Ridgefield 7-to-1.

It was 114-degrees at game time in Walla Walla where the Sweets out-sweated the Cowlitz Black Bears 7-to-3.
R.J. Gordon pitched 7-innings of 1-run ball with 11-strikeouts for Bend as the Elks surprised Corvallis 4-to-1. Julian Kodama was 3-for-4 at the plate for Bend.

Port Angeles roughed up former AppleSox Seth Kuykendall for 6-runs in the first inning as the Lefties went on for an 8-2 win at Yakima Valley.

Walla Walla gained a game on Yakima Valley in the West Coast League North Division standings and is just 2-games back. Wenatchee remains 3-and-a-half back, now tied with Bellingham at 8-and-11.

Corvallis’ lead over Ridgefield in the South remains 3-games with both the Knights and Raptors losing. Portland evened its league record at 8-and-8 with the win over Wenatchee.

The schedule tonight is the same as last night with Ridgefield hosting Bellingham; Cowlitz is at Walla Walla; and Yakima Valley hosts Port Angeles, all at 6:35. Corvallis and Bend and Wenatchee and Portland will get going at 7:35 tonight.

Toronto launches into Mariners for 9-3 win

Toronto brought its hitting shoes to the ballpark last night in its opener against the Mariners, scoring 9-runs on 15-hits in a 9-3 victory…

Seattle starter Chris Flexen lasted 5-innings, allowing 3-runs on 7-hits with 3-walks and 2-strikeouts. He was on the hook until Ty France helped him out in the 6th when the Mariners finally got to Blue Jays starter Robbie Ray…

Toronto’s Marcus Semien followed in the 7th with a 3-run blast to make the final score 9-to-3. Manager Scott Servais says the Jays have a good offense that will make you pay…

Ty France, Mitch Haniger and Tom Murphy all had 2-hit games for Seattle in the loss. The two teams will play again today at 4:07 when Justus Sheffield faces Steven Matz. Today’s game is not on TV and can be heard on ESPN Radio.

In a couple off-the-field stories, Mariner pitcher Héctor Santiago is appealing his 10-game suspension and fine for an illegal substance found on his glove. Major League Baseball announced the suspension and fine yesterday after his glove was confiscated and Santiago ejected from Sunday’s game in Chicago after umpires found something sticky inside his glove.

And in much-better news, former Wenatchee AppleSox Marco Gonzales and his wife Monica announced Tuesday the birth of their first child. Baby Grace Linda Gonzales was born on Saturday and came into the world a healthy 7-pounds, 4-ounces. Congratulations to the happy couple!

The Yankees bounced back from Monday’s loss with its largest offensive output of the season in an 11-5 win over the Angels. Gary Sánchez, Aaron Judge and Miguel Andújar all went deep for New York. And, speaking of going deep, Shohei Ohtani hit two more home runs to bring his total to 28…

The Orioles scored 9-runs in the final two innings, four of which on 2-run homers by Ramon Urias and Austin Wynns in the 9th as Baltimore crushed Houston 13-to-3.

Texas and Oakland combined for 6-home runs in the Ranger’s 5-4 win in the Bay Area. Nick Solak’s 2-run shot in the 9th was the insurance Texas needed as Jed Lowrie and Mitch Moreland hit solo home runs in the bottom of the 9th to make it close.