The Seahawks came an inch away from the NFC West Championship last night. On 4th and goal from the 6-yard line with time running out, Russell Wilson threw to Jacob Hollister at the one but San Francisco’s Dre Greenlaw tackled him just short of the goal line…

The stop preserved San Francisco’s 26-21 victory and gave the 49ers the #1 seed in the NFC and homefield advantage throughout the playoffs. Seattle gets the #5 seed and will travel to Philadelphia Sunday.

Coach Pete Carroll said he loves the fight in his team, but they just came up short… 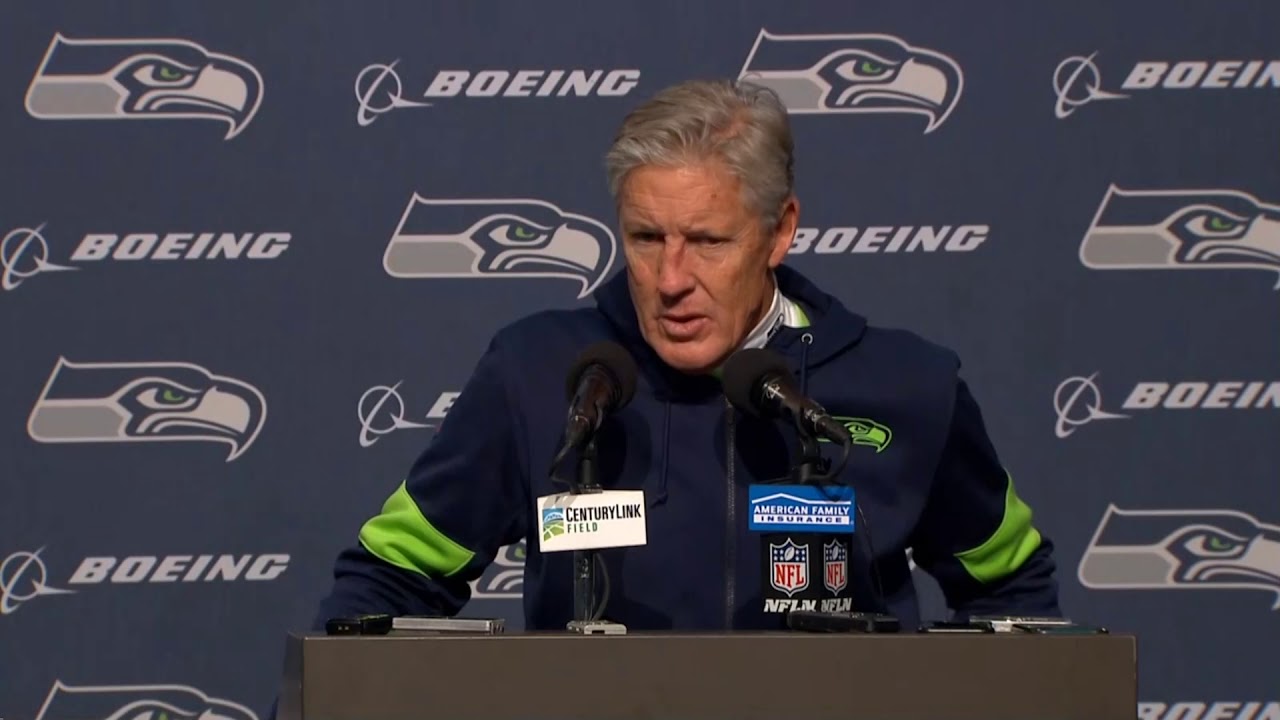 Seattle came out sluggish offensively in the first half and trailed 13-nothing at half time. Russell Wilson finished the game 25-of-40 for 233-yards and two touchdowns. Travis Homer carried 10-times for 62-yards while catching 5-passes for 30.

In his first NFL game in 14-months, Marshawn Lynch electrified the crowd with 12-carries for 34-yards and a touchdown. Carroll was very proud of how Lynch carried both the ball, and the pressure of the moment… 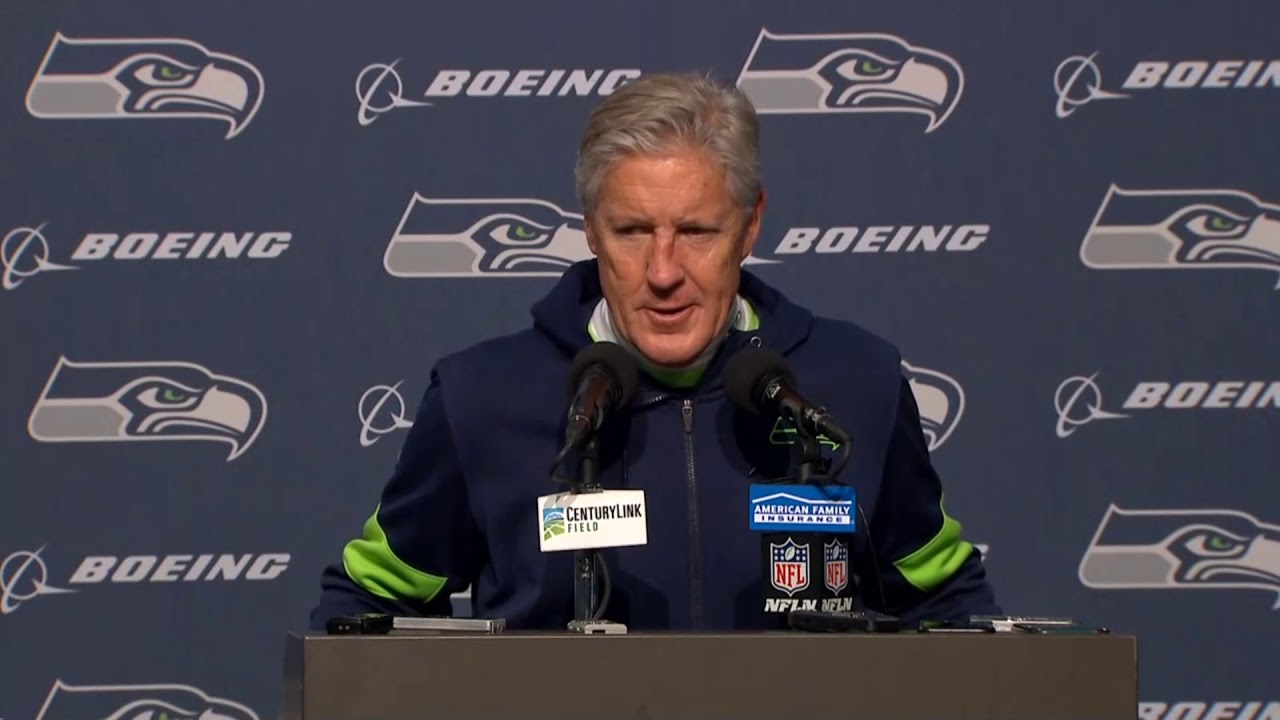 Seattle, for the second time this season, will head to Philadelphia to take on the Eagles in Sunday’s Wild Card game. Kick off at Lincoln Financial Field will be at 1:40 on NBC.

In fact, here’s the entire schedule for the NFL’s Wild Card Weekend. It starts with the AFC games on Saturday as Buffalo heads to Houston to take on the Texans at 1:35 on ESPN. That’s followed by Tennessee at New England at 5:15 on CBS.

Then on Sunday, the 10:05am game has New Orleans hosting Minnesota on FOX. Then the Seahawks and Eagles kick off at 1:40 on NBC.

On Friday, Washington State just had no answer for Air Force’s triple-option attack as the Falcons beat the Cougars 31-21 in the Cheez-It Bowl.

LSU’s quarterback Joe Burrow threw for 7-touchdowns and ran for another as the Tigers rolled all over Oklahoma 63-28 in the Chik-Fil-A Peach Bowl.

The other college football playoff semi-final was much closer, as Clemson scored with under two-minutes remaining to beat Ohio State 29-23. The Buckeyes got to Clemson’s 23-yard line with 37-seconds to play but were intercepted in the end zone. To it will be Clemon and LSU for the National Championship in two weeks.

We still have 15-bowl games left on the schedule, after 4 today. Tomorrow features five bowl games beginning at 9am on ESPN with the Belk Bowl. Then it’s the Tony the Tiger Sun Bowl, followed by the Autozone Liberty Bowl, the Nova Home Loans Arizona Bowl and finally the Valero Alomo Bowl.

New Year’s Day offers four more bowls, beginning with Minnesota and Auburn in the Outback Bowl at 10am. Michigan takes on Alabama in the VRBO Citrus Bowl, also at 10am. Then it’s the Rose Bowl Game presented by Northwestern Mutual with Oregon taking on Wisconsin at 2. Finally, the AllState Sugar Bowl features Georgia and Baylor at 5:45 on ESPN.

There are two more bowls on Thursday, the Famous Idaho Potato Bowl on Friday and the Armed Forces Bowl Saturday.

We head for the finish line Monday with the Lending Tree Bowl and then the following Monday, January 13th with the College Football Championship presented by AT&T featuring Clemson and LSU at 5 o’clock on ESPN.

We had quite a bit of prep basketball over the weekend, so let’s check the Les Schwab Scoreboard…

Eastmont stopped Moscow Friday 38-34 at the Avista Tournament. Wenatchee fell to Lapwai 60-47. Moses Lake topped Issaquah 65-45. Cashmere started its run through the Holiday Classic tournament in Oregon with a 60-46 win over Liberty. Cascade beat Manson 43-25. Eastside Prep was no match for Chelan, falling 67-to-9. And Colton beat Waterville-Mansfield 51-41.

Staying on the girls side of the ledger, let’s go to Saturday. Wenatchee beat Moscow 54-46…

Lapwai beat Eastmont 41-31 in the 4th place game of the Avista Tournament, but the Wildcat’s Megan Chandler was selected to the All-Tournament Team.

Cashmere won the semi-final of its tournament in Oregon over Beaverton 56-46. Nooksack Valley beat Chelan by 8 46-38. Bellevue Christian stopped Cascade 42-26.

Hailey Van Lith scored 25-points and added 17-reboounds to lead Cashmere to a 48-36 win in the championship of The Holiday Classic over La Salle of Oregon.

Turning to the Les Schwab Boys Basketball Scoreboard from the weekend…

Eastmont’s Oscar Calvillo and Wenatchee’s Nate Blauman were selected to the All-Tournament team.

There are two games on the schedule for today…

Eastmont is in Spokane to face Rogers with the boys going first then the girls to follow.