The Wenatchee Panthers ran past the Davis Pirates Friday 42-16 at Lee Bofto Field in the Apple Bowl. Nate Blauman had a bounce-back game, scoring two rushing touchdowns on 15-carries for 174-yards. 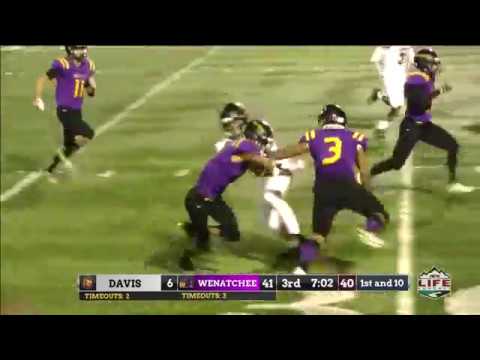 Camden Sirmon had a solid night at quarterback for Wenatchee, scoring the Panther’s first touchdown on a quick scamper around the right end from 6-yards out. Sirmon finished with 53-yards on the ground and was 15-of-21 through the air for 184-yard, three touchdowns and an interception.

Wenatchee (6-1, 4-0) finished with 256-yards rushing and even scored on the ground when offensive lineman Cameron Mackenzie capped a 5-play drive in the 4th quarter with a TD run.

The Panther defense held Davis (3-4, 1-2) to 1-yard rushing and intercepted Pirate quarterback Jose Reyes three times (2 by Johnny Amezcua and another by Obadiah Young). Reyes finished 14-of-21 passing for 240-yards and a 71-yard touchdown pass to Jackson Cursinger. He also ran for a touchdown from 16-yards out.

Wenatchee will host Sunnyside next Friday at Lee Bofto Field at the Apple Bowl in a battle of the only two remaining unbeaten teams in Big-9 play. The Grizzlies won a thriller Friday night over Eastmont 29-28. The Wildcats reportedly had a potential game-winning field goal blocked at the end of the game.