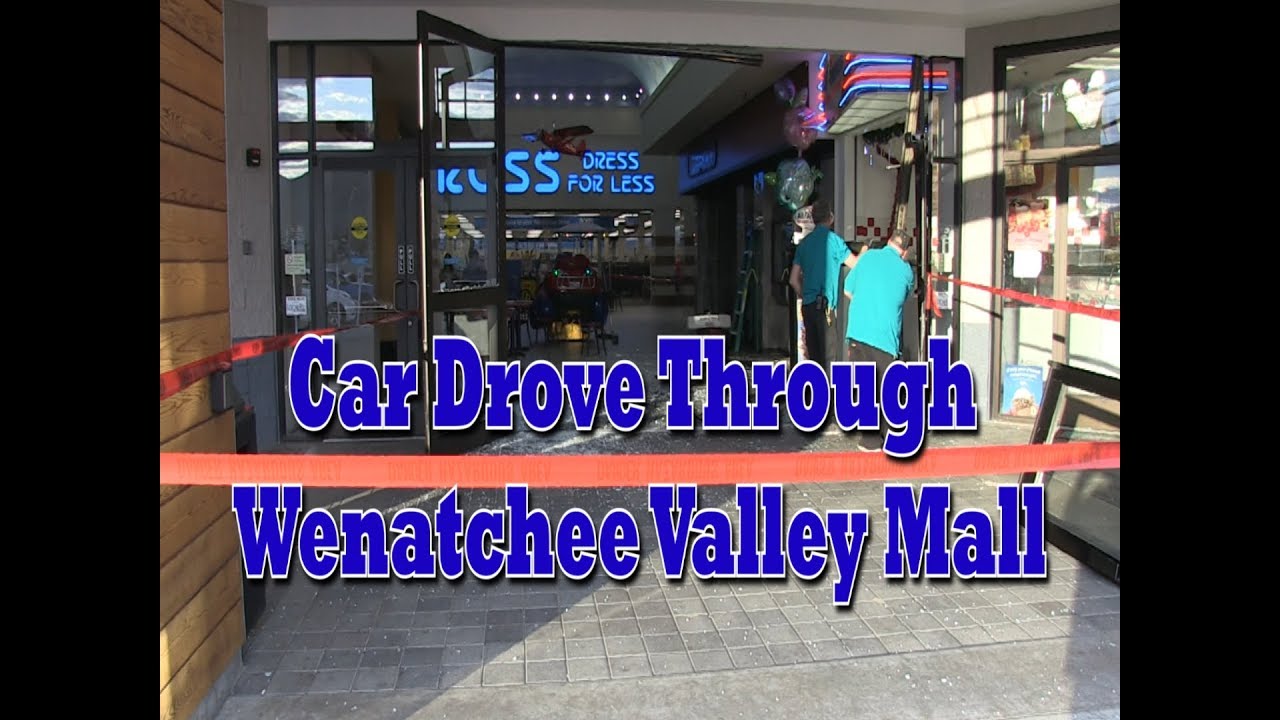 And now, a few of the stories we’re following for you tonight, The DOLCO Packaging plant in South Wenatchee was hit by fire yet again Wednesday evening. The man suspected in the assault of a Grant County Courthouse security officer Tuesday, was captured in Grand Coulee Wednesday afternoon, and, Washington officially became the first West Coast state to ditch the twice-yearly time switch and permanently stay with daylight saving time.

Miraculously, no one was injured early Wednesday evening when a man drove his car through the main entrance of the Wenatchee Valley Mall. According to eyewitnesses, the man drove his white, BMW through the mostly-glass doors into the mall, and then kept going. . .

East Wenatchee Police Sergeant Karsten Garcia was quick to arrive on the scene and described what he and fellow officers were responding to. . .

An East Wenatchee man identified as 31-year old Francisco Samuel Kehoe was arrested a short while later.  Mall officials closed the mall early last night and kept security at the gaping entrance. The Mall opened at 10:00 o’clock this morning, as usual.

The two-alarm fire was called in at 8:45 p.m. and drew crews from Wenatchee, Douglas County, Entiat, Orondo and Leavenworth. McKellar said sprinklers inside the building helped extinguish the blaze but a cross truss did sustain damage. Firefighters remained on site until almost 2:00 this morning.

DOLCO is a major manufacturer of poly-sti-run foam for egg cartons and fruit packaging. It was the fifth fire since 2013 at the plant on South Columbia Street near the George Sellar Bridge, two in the yard outside the plant. One of those was determined to be arson after video showed a person setting fire to pallets. Wednesday’s fire remains under investigation.

Joshua Maher, the man suspected in the assault of a Grant County Courthouse security officer Tuesday, was captured in Grand Coulee Wednesday afternoon. The 34-year-old Maher was the subject of a massive manhunt after he tried to enter the courthouse in Ephrata early Tuesday and refused to show his hands to the female officer.

That led to a confrontation that spilled outside, where the unidentified officer suffered a broken kneecap and finger. At about 4 p.m. Wednesday, Maher initially resisted arrest by Grant County Sheriff’s deputies but soon surrendered, the City of Ephrata said in a press release. After the courthouse assault, residents were advised to lock their doors and stay inside and two Ephrata schools were locked down as a police dog was brought in to search for Maher.

After the capture Wednesday, Grant County Sheriff Tom Jones said, QUOTE, Courthouse security officers are part of our family, and if you hurt one of them, you can expect that our family won’t stop looking until we catch you, UNQUOTE.

But, the end of “spring forward-fall back” won’t happen until the U.S. Congress gives the green light to all of the states moving toward year-round daylight saving time. Sticking with daylight saving time year-round would give people an extra hour of daylight on winter evenings. The sun would rise later during winter mornings than under the current observance of standard time between November and mid-March. Both California and Oregon voters have also indicated they too would prefer the switch to permanent daylight saving time.

Coming up next, A California based company is reportedly interested in locating a manufacturing plant near Alcoa’s idled Wenatchee Works smelter. Trooper Jeremy Weber of Wenatchee has been named the 2018 District 6 Washington State Patrol Trooper of the Year, and, Chelan County emergency management officials are reminding mushroom hunters headed into areas burned by the Cougar Creek Fire to be vigilant about keeping up to date on weather forecasts.   I’m Grant Olson and you’re watching the NCWLIFE Evening News.

Trooper Jeremy Weber of Wenatchee has been named the 2018 District 6 Washington State Patrol Trooper of the Year. Trooper Weber was nominated as the District 6 Trooper of The Year by Sergeant Ryan Raymond and was selected by the District Awards Committee.

In other State Patrol news, Wenatchee Detachment 1 was selected as the District 6 “Detachment of the Year.”  Detachment 1 produced outstanding efforts towards reducing collisions and apprehending impaired drivers throughout 2018. Their efforts increased DUI arrests by 37% in 2018 compared to 2017. The Detachment is led by Sergeant Ryan Raymond.

Chelan County emergency management officials are reminding mushroom hunters headed into areas burned by the Cougar Creek Fire to be vigilant about keeping up to date on weather forecasts and having a pre-planned escape route in the event of seasonal rain showers.

The Cougar Creek Fire was one of the largest wildfires in the state last year, burning more than 42,700 acres in the Okanogan-Wenatchee National Forest.

The Entiat Ranger District is preparing for a busy mushroom season and the hundreds of people it may attract. Emergency Management officials also remind mushroom hunters to watch for hazards in burned areas. Snags and damaged trees, blackened killed trees or green trees burned through at the bottom can fall at any time or they can block trails or roads, including your exit if you should need to leave quickly during a rainstorm.

Prep athletes around the country made commitments to college back in February on National Signing Day.  The Wenatchee High School Booster Club held a Commitment Ceremony last night to honor those student-athletes.  One-by-one, they introduced themselves and their college of choice…

Before the nine athletes head off to college, WHS Athletic Director Jim Beeson had a final offer of advice…

We wish them all the best of luck.

The District 6 1-A soccer tournament wraps up today at Lee Bofto Field at the Apple Bowl.  The first game at 6 features Bridgeport and Chelan for 3rd and 4th place.  Then at 8, it’s the district championship between Cashmere and Cascade.

Since there’s soccer in the Apple Bowl, Wenatchee’s playoff game against Mt. Si will be played at Mike Hollis Field at Wenatchee Valley College.  Faceoff is at 6 o’clock.

Harmony Meadows is the site for the two day tournament that begins today at 3 and resumes Saturday morning at 10.

Eastmont and Wenatchee will battle the rest of the Big-9 at Apple Tree Golf Course with a 10 o’clock tee time.

Also in the CTL today, Omak plays at Chelan while Cascade hosts Okanogan at 2:30.

Kikuchi worked 7-and-two-thirds innings, allowing 1-run on 3-hits with 3 strikeouts to improve to 2-and-1 on the season.

Jay Bruce tied a team record with three doubles and a home run at the plate.  Mitch Haniger and Edwin Encarnacion also hit homers for Seattle, keeping the M’s a game above .500 at 20-and-19.

Seattle and New York wrap up the series today at 3:35 as Mike Leake faces J.A. Happ.

Finally tonight, let’s find out what’s going on around the valley this weekend with NCWLIFE’s Megan McPherson. . . And that’s going to do it for our newscast tonight. For more on these stories and other news from around North Central Washington, you can find us on Facebook or our website at ncwlife.com. And, remember, if you see news happening we’d like to hear from you.  You can send us an email at news@ncwlife.com, or give us a call 888-NCWL (6295). Also, keep it right here on the NCWLIFE Channel tomorrow morning for Wake Up Wenatchee Valley with host Dan Kuntz. I’m Grant Olson, thanks for joining us and have a great night.

Stevens Pass will close this afternoon for avalanche control work