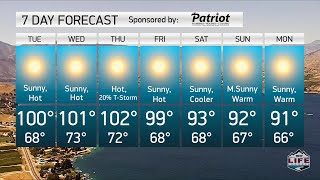 And now, a few of the stories we’re following for you tonight, The Wenatchee Valley has now recorded its 12th and 13th deaths from the corona virus. The Chelan-Douglas Health District says a Colonial Vista care center is the site of 17 new COVID-19 infections, which were found during testing July 22nd, and, At the Wenatchee Walmart Super center, which closed for cleaning last week after staff there tested positive for corona virus, two more patients have emerged.
But first, we begin tonight. . .

No Class in Fall -It’s all but official: Both Wenatchee and Eastmont school districts say they’re planning to commence classes in an online-only format — no in-person instruction — when school resumes August 26th, in the face of the COVID-19 crisis. Both districts say the area’s rising COVID-19 infection rate makes a return to physical classrooms risky for students, faculty, staff and the wider community. Both districts have plans for remote learning to present to their boards. The Wenatchee School Board is expected to vote Wednesday on a proposal for remote learning; Eastmont’s board will do the same on Monday. In both districts, younger students would be the first to return to brick-and-mortar classrooms as the pandemic allows, followed by their older peers. The Wenatchee School District plans to host a virtual town hall meeting at 6 p.m. August 4th on its restart plans for fall. Parents can submit questions before the meeting at wenatcheeschools.org through August 2nd.

New COVID Deaths -The Wenatchee Valley has now recorded its 12th and 13th deaths from the coronavirus. The Chelan-Douglas Health District says two Chelan county residents, one man in his 70’s and one in his 80’s, have passed away from COVID-19. Theirs are the first deaths attributed to the virus locally since mid-July. Twenty-six patients were hospitalized in Wenatchee with the disease yesterday, according to Confluence Health, including six in intensive care.

Colonial Vista COVID -The Chelan-Douglas Health District says a Colonial Vista care center is the site of 17 new COVID-19 infections, which were found during testing July 22nd. Four of those are staff members, the rest are patients in the post-acute and rehabilitation wing. Prestige Care, which owns Colonial Vista, gives a different figure of 16 cases, which they say include two staff members. Whatever the numbers, it’s the third time coronavirus has struck the Colonial Vista campus. Two other outbreaks were recorded there in April and June, affecting 14 people.

Walmart COVID -At the Wenatchee Walmart Supercenter, which closed for cleaning last week after staff there tested positive for coronavirus, two more patients have emerged. The health district says that’s a total of 23 Walmart employees so far, all of whom have been sent to recover at home. Workers there criticized the store for not warning employees who might have been exposed after their coworkers tested positive.
Coming up next, We’ll tell you about three fires currently burning in Okanogan County. Monday was another good day at the Colockum fire southeast of the valley as crews continued to demobilize. A driver was injured and had to be extricated Friday after rolling a pickup down an embankment on Chelan Hills Road, one mile south of the Beebe Bridge in Orondo, and, The discovery of a blue-green algae in the water has Grant County warning people to avoid contact with Potholes Reservoir until further notice. I’m Grant Olson and you’re watching the NCWLIFE Evening News.

Welcome back, and in other news. . .
Okanogan Fires – Two more major fires erupted in Okanogan County Monday, leading to evacuations and adding to the already busy and destructive fire season in the county, here’s more. . .
Colockum Fire Wrap -Monday was another good day at the Colockum fire southeast of the valley as crews continued to demobilize. As of this morning, the fire is 90% contained and only level one evacuations remain for Colockum, Kingsbury and Jump off Roads and the Tarpiscan Road evacuation notice has been lifted. After more accurate mapping on Monday, the estimated size of the fire has been reduced from 3,337 acres to about 2,967 acres. Local fire districts from the DNR, the BLM and Chelan County Fire District #5 are now the primary agencies. 44 fire personnel remain on-site for mop-up activities and dousing whatever pop-up fires may develop inside the fire lines. One outbuilding was damaged but there were no reports of any structures destroyed or injuries. The cause of the fire remains under investigation.

Orondo Rollover -A driver was injured and had to be extricated Friday after rolling a pickup down an embankment on Chelan Hills Road, one mile south of the Beebe Bridge in Orondo. Rescuers from the Orondo Fire Department, Douglas County sheriff and Lake Chelan EMS had to get creative, first chaining up the truck so it wouldn’t roll further down the ravine, then using ropes and a ladder to build a bridge from the roadway down to the trapped victim. He was treated at the scene, and then transported to Lake Chelan Community Hospital.

Potholes Reservoir Algae -The discovery of a blue-green algae in the water has Grant County warning people to avoid contact with Potholes Reservoir until further notice. The Grant County Health District said the naturally forming bacteria often occur during hot weather and are extremely harmful to people and pets. People are advised not to swim or water ski in the reservoir and keep all pets and livestock away. The same sort of advisory is in place for Moses Lake after testing last month also showed toxin levels above recreational guidelines. Blue-green algae has also been confirmed in Willow Lake in Grant County but toxin levels were not shown to be above recreational guidelines.
You’re watching the NCWLIFE Evening News. Coming up next, tonight’s feature story and your complete local weather forecast. That and much more still to come on the NCWLIFE Evening News, stay with us.

Welcome back to the NCWLIFE Evening News. . .
Museum Painting -Wenatchee is home to an antique oil painting with a lot of history, and now the Wenatchee Valley Museum and Cultural Center has pulled out all the stops to make the old artwork look like new again. In tonight’s feature story, NCWLIFE’s Jefferson Robbins explores what it takes to bring a 126-year-old masterpiece back to life. . .
And that is a look at your local weather forecast, coming up next, tonight’s sports report with Eric Granstrom and more as the NCWLIFE Evening News continues right after this.

Kendall Graveman was making his first Major League start since coming back from Tommy John surgery Monday. He looked incredible for the first two innings against the Houston Astros, striking out the first three batters he faced.
But then came the third and the second time through the lineup. An RBI-double by Jose Altuve and three-run home run by Alex Bregman spoiled the storybook return and Houston went on for the 8-5 win over the Mariners, taking 3-out-4 games in the series…
Graveman ended up going 4-innings, allowing 7-runs on 6-hits with 7-strikeouts and 3-walks. He said it felt great to be on a Major League mound again…
A highlight for the Mariners came in a 3-run top of the 3rd when 1st baseman Evan White got his first-ever home run in the Major Leagues…
Kyle Lewis continued his hot-streak to start the season, coming up with another couple hits to up his batting average to .400 through four games. Despite the loss, manager Scott Servais focused on the positives of the day and the series for the Mariners…
Seattle now heads for Anaheim to being a three-game series with the Angels. Justus Sheffield will make his first start of the season against the Halo’s Patrick Sandoval. First pitch is at 6:40 tonight.

Opening up the Les Schwab Scoreboard, there was only one other game in the American League West last night…
Six Oakland pitchers combined on a 9-hit shutout of the Angels in the Bay Area. They also combined for 12-strikeouts on the day. Offensively, Oakland was led by the 3-for-4 performance of Matt Chapman and Mark Canha hit his first homer of the season.
Houston and Oakland lead the A-L West at 3-and-1. Texas didn’t play Monday and remains 1-and-2, a game-and-a-half back. Seattle, and Los Angeles are 1-and-3 heading into tonight’s series.

The Seattle Sounder’s stay in the MLB is Back Tournament was brief…
Seattle was bounced out of the first round of the tournament by LAFC 4-1. L-A got on the board first in the 14th minute with the first of two goals in the game by Diego Rossi. Latif Blessing made it 2-nil at half with a goal in the 39th minute.
The Sounders came out in the second half and scored in the 75th minute on a Will Bruin tally. Rossi’s second goal came in the 82nd minute to make it 3-1. Brian Rodriguez added insult to injury with a goal in the 89th minute for the final score of 4-1.
Goalkeeper Stefan Frei says the Sounders weren’t able to take advantage of L-A’s aggressive play…
The tournament was the “welcome-back” to Major League Soccer after the COVID shutdown. The league is hoping after the tournament, being played in a “bubble”, that the regular season will be able to proceed.

Today is supposed to be the first day of training camp for the Seattle Seahawks. We’ll find out at day’s end how many showed up amid concerns over the pandemic. One player who definitely won’t be attending camp, or any of this season for that matter, is offensive guard Chance Warmack.
According to the NFL Network’s Mike Garafolo, Warmack will be taking a voluntary opt-out for this season. The former 10th overall pick, who sat out last season to get healthy, had signed with Seattle this spring.
The Seattle Times’ Bob Condotta (con-DOTE-uh) reports people around Warmack have contracted COVID-19. He will receive a 150-thousand-dollar stipend from the NFL and his contract with the Seahawks will roll over into next year.

Thanks Eric.
Boat on Blewett -Finally tonight, it’s a boat owners worst nightmare as motorists on Blewett Pass were greeted with the unusual sight of a pleasure boat sitting in the southbound lanes of Highway 97 near the summit Monday afternoon. The Washington State Patrol said the boat’s owner failed to secure the boat to its trailer with tie downs and safety chains. That resulted in lanes being blocked, extensive damage to the boat and a ticket for the owner for failing to secure a load.
Now let’s check in with Dan Kuntz for a look at what’s coming up tomorrow morning on Wake Up Wenatchee Valley, Dan. . .
-And that’s going to do it for our newscast tonight. For more on these stories and other news from around North Central Washington, you can find us on Facebook or our website at ncwlife.com. And, remember, if you see news happening we’d like to hear from you. You can send us an email at news@ncwlife.com, or give us a call 888-NCWL (6295). I’m Grant Olson, thanks for joining us and have a great night.