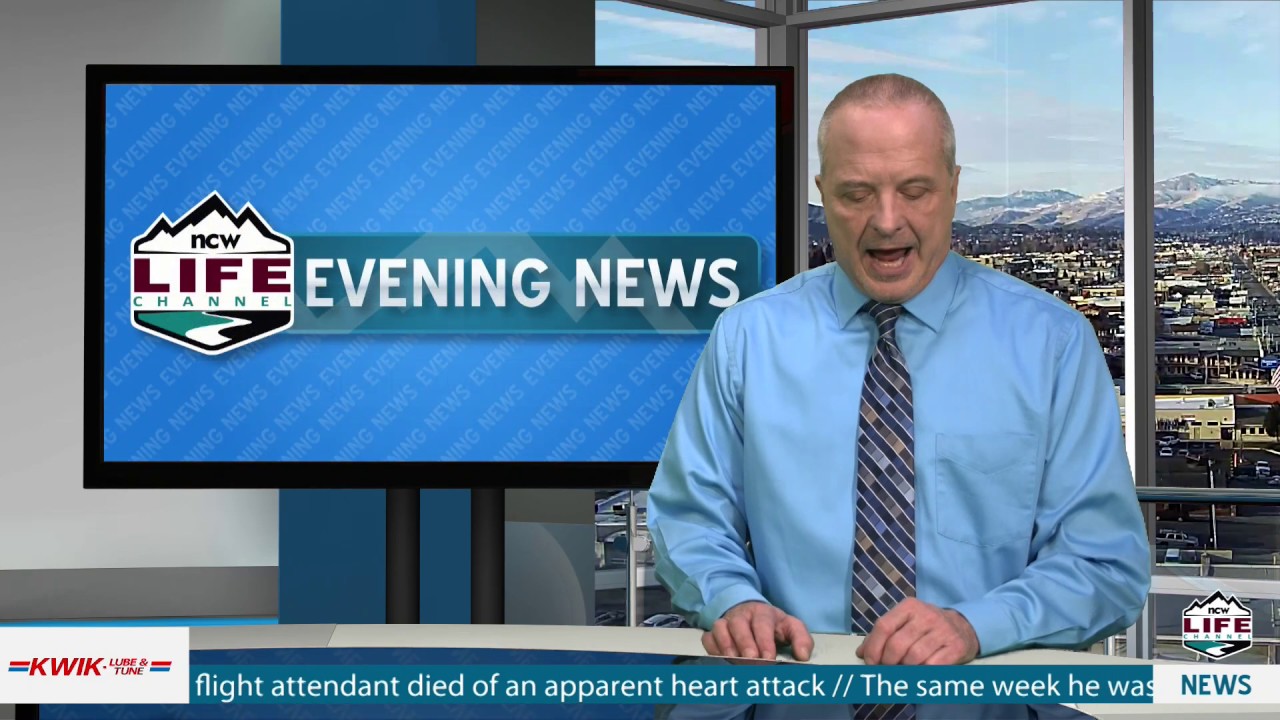 And now, a few of the stories we’re following for you tonight, Neighbors of the planned Blackrock Terrace subdivision take their concerns to the Wenatchee City Council. Chelan County Public Works began brooming this week on Mission Ridge Road after once again receiving reports from drivers who have found a tar-like substance on their vehicles, and, State Rep. Mike Steel said there is momentum in the Legislature to change the requirement for passing school bond issues to a simple majority.
But first, we begin tonight. . .

After 35 days, the government shutdown is over. Earlier today, President Trump said a deal had been reached on legislation that would reopen the U.S. Government through February 15th. The government closure was threatening the economy as hundreds of thousands of federal workers missed a second paycheck on Friday. Democrats in the House had demanded a reopening of the government before any negotiations with Trump and his Republican allies in Congress on border security. Trump said in the meantime, a bipartisan committee of lawmakers would meet to discuss the nation’s border security needs.

Neighbors of the planned Blackrock Terrace subdivision took their concerns to the Wenatchee City Council. . .

A group of homeowners living downslope of the proposed subdivision voiced their opposition during the public comment portion of Thursday’s council meeting. . .

Steve and Tanya Tramp, the owners of the property, are proposing 17 home lots on 13 acres of sloping property in the Skyline Drive area below Saddle Rock. The neighbors are frustrated with a decision by a hearings examiner to approve the project. But Mayor Frank Kuntz says there’s nothing the City can do about it at this point. . .

The Washington Department of Fish and Wildlife has appealed the hearing examiner’s ruling arguing it threatens prime mule deer habitat. Jim Brown, WDFW regional director, said in a press release they are not trying to stop the development, just ensure proper steps are taken to protect the habitat. Steve Tramp said at a hearing in November they hoped to get started on the development this spring.

Chelan County Public Works began brooming this week on Mission Ridge Road after receiving reports from drivers who have found a tar-like substance on their vehicles after traveling on the roadway.
The reports of road tar comes after county crews not only re-chip sealed the road but also sampled and performed additional testing of the oil used in the chip sealing process. The 2018 chip seal also was completed earlier in the season, allowing for more curing time before fall and winter conditions hit but apparently, to a lesser extent, the problem is back. County Works officials say a possible cause for the oil particulate on the roadway may be that vehicles’ snow tires and county snowplows are grinding the fresh emulsion off the roadway, bringing up some fine particulate. Motorists traveling on the roads are cautioned to avoid driving in pools of water or running water, when safe to do so, to minimize the potential of the particulate spraying onto their vehicles.

State Rep. Mike Steel said there is momentum in the Legislature to change the requirement for passing school bond issues to a simple majority. Currently, a 60 percent supermajority is needed for approval. Steele sits on the House Education Committee and in this week’s Legislative Update he says that’s one of many big education issues facing state lawmakers.

Coming up next, Rock Island Mayor Randy Agnew talks about making the city a hub for technology. It was a landmark day for firefighting services in the Leavenworth area yesterday, we will tell you why, and, NCWLIFE’s Megan McPherson will be along to fill us in on some of the events going on this weekend. . .I’m Grant Olson and you’re watching the NCWLIFE Evening News.

Welcome back, and in other news…
At last night’s city council meeting in Rock Island, councilmembers heard a presentation on how the city can become a hub for technology and the future of developing Rock Island’s waterfront. On this morning’s Wake Up Wenatchee Valley, Rock Island Mayor Randy Agnew joined host Dan Kuntz to talk about his vision for Rock Island and the Greater Wenatchee Valley.

It was a landmark day for firefighting services in the Leavenworth area yesterday. Chelan County Fire District 3 announced Thursday night, for the first time in its 112-year history the Chunstick Road station was staffed entirely by women. Command 3 is staffed by Gen Polizzi to the District’s newest department member, Jessica Campbell. Officials posted on their Facebook page that, quote, the “firefighters and EMTs serve this community with capability and skill. We could not be prouder”, unquote.

Time now for NCWLIFE’s Megan McPherson to fill us in on some of the events going on this weekend.

Welcome back to the NCWLIFE Evening News…
In tonight’s feature story we continue our look at the annual Point In Time Count, a nation-wide event focusing on collecting data on the local homeless population. . .

Stay tuned to the NCW Magazine next week for a full feature on the Homelessness Count and what local agencies are doing to help address this ongoing issue.

NCWLIFE Channel Sports
Thanks Eric.
Finally tonight, the Wenatchee Valley College Foundation is now accepting nominations for four annual awards that recognize foundation board members, friends of the college and distinguished alumni. The deadline for nominations is March 15th. The awards are: Outstanding Friend of the College, the Harvey Award, which recognizes current or previous WVC Foundation Board members who demonstrate a history of support for the foundation through service and financial contributions, The Distinguished Alumni Award and WVC Heroes which recognizes the behind-the-scenes supporters who have donated their money or time to the college and its programs. Community members can submit nominations at: wvc.edu/awards. Award recipients will be announced at the Foundation Gala at the Wenatchee Convention Center on May 18th.