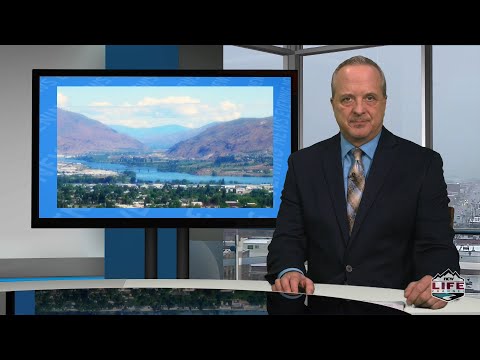 Welcome back, and in other news. . .
Affordable Housing -Chelan County officials are hoping to entice development of more affordable housing through tax-sheltered opportunity zones. The program was created by Congress as part of the Tax Cut and Jobs Act of 2017. The Opportunity Zones are intended to spur economic development in areas that are designated as impoverished or under served. Commissioner Kevin Overbay says one of the components of the program includes investment in low income housing projects. . .
The counties of Chelan, Douglas, Okanogan and Ferry along with the Colville Nation have combined to form the Northstar Opportunity Zone. Chelan County’s point man in the process is recently-hired economic development director, Blake Baldwin . . .
Baldwin and Overbay appeared on a recent In Focus interview with NCWLIFE’s special correspondent Steve Hair. The interview is available on demand at NCWLIFE.com.
Parking Signs -If you’ve ever had trouble finding a place to park in downtown Wenatchee, the city has a message for you: Watch for the apple. Crews this winter have been installing apple-emblazoned signs at its free lots on Palouse, Worthen and Second streets. As time allows, they’ll be putting up directional signs on Wenatchee and Chelan avenues and Mission Street directing motorists to the lots. The city says the goal is to improve the downtown experience and encourage long-term parkers to use off-street lots.
Weekend Events -Let’s check in with NCWLIFE’s Megan McPherson now for a look at what’s happening around the valley for you to enjoy this weekend. . .
You’re watching the NCWLIFE Evening News. Coming up next, tonight’s feature story and your complete local weather forecast. That and much more still to come on the NCWLIFE Evening News, stay with us.

Welcome back to the NCWLIFE Evening News. . .
Kennel Kameos -Time now for our weekly Kennel Kameos feature from the Wenatchee Valley Humane Society. Tonight, NCWLIFE’s Megan McPherson introduces us to Palpatine the cat. . .
And that is a look at your local weather forecast, coming up next, tonight’s sports report with Eric Granstrom and more as the NCWLIFE Evening News continues right after this.

NCWLIFE Channel Sports
Now that Mike Leach has left Washington State for Mississippi State, the search for a new football coach in Pullman is underway…
News broke yesterday morning with a Tweet by the Athletic Director at MSU, saying the deal was done and that they’d signed Leach away from WSU.
Possible candidates to replace Leach are his former defensive coordinator Alex Grinch, who is the d-coordinator at Oklahoma. Also mentioned as possible candidates are Boise State coach Bryan Harsin; Central Michigan coach Jim McElwain; and USC offensive coordinator Graham Harrell.
WSU Athletic Director Paul Chun has the task of replacing the man who was the third-winningest coach in Cougar history.

Let’s dive right into the Les Schwab Prep Scoreboard from Thursday. First, in girl’s bowling…
Wenatchee swept two games and two bakers from Sunnyside to top the Grizzlies 1,974 pins to 1,477. Kylah Hankins led the way with a 210 and 184. Elisha Ferguson rolled a 181 while Mackenzie Munro bowled a 180 and Jaiden Thompson a 176. The Panthers improved to 8-and-2 on the season with the win.

The Wenatchee Panthers hosted the Eastmont Wildcats in boys swimming and diving Thursday…
And Wenatchee came out on top 136-to-46 at the Wenatchee High School Pool.
Coming up tomorrow, Eastmont, Moses Lake and Wenatchee will take part in the Kentridge Invite beginning at 9am.

Turning to the Les Schwab Prep Wrestling Scoreboard from last night…
Sunnyside beat Eastmont 61-18. Moses Lake had no trouble with Davis, winning 72-to-6. And Othello beat Ephrata in CWAC wrestling 52-19. And in girls wrestling last night at Eastmont High School, Sunnyside came out on top 72-to-6.
Coming up this weekend, Ephrata is in Post Falls, Idaho for the River City Duals today at 3 and tomorrow morning at 9. Also tomorrow, Chelan wrestles at the Warden Invitational beginning at 9. At 9:45, Cashmere begins its quest at the Sky Valley Invitational in Sultan. The Brewster, Eastmont and Quincy boys will join 12 other teams at the Cascade Invite beginning at 10am.
The Ephrata, Quincy, Moses Lake and Wenatchee girls teams are at the Kelso Invite beginning today at 3:30 and resuming tomorrow morning at 10.

In girls basketball last night…
Brewster mauled Manson 46-to-14. Pateros topped Entiat 49-34. And Waterville-Mansfield continued its winning ways with a 61-to-11 win over Bridgeport.
On the boy’s side last night, Brewster scored 95-points in a 43-point win over Manson. Pateros topped Entiat 63-52. And in double-overtime, Bridgeport edged Waterville-Mansfield 79-77.
Coming up tonight in girls basketball…
It all begins at 5:45 with Moses Lake traveling to Eisenhower. Ephrata hosts Othello. Toppenish plays at Quincy. Omak hosts Cashmere. And Highland plays at Cascade. At 6, Chelan is on the road at Okanogan. And at 6:30 tonight at the Town Toyota Center, Eastmont takes on Wenatchee in the Basketball Showcase.
By the way, we’ll have three games from the TTC tonight on NCWLIFE, beginning at 6:30 with the Unified game. We’ll follow that up with the girls game at about 7:30. Then the boys game at about 8:45 as Grant Olson and Eric Granstrom bring you all the action here on the NCWLIFE Channel.
Let’s take a look at the rest of the boy’s schedule for tonight. Games beginning at 7:15 have Othello at Ephrata; Toppenish at Quincy; Cashmere in Omak; Okanogan hosting Chelan; and Highland at Cascade. Moses Lake plays at Eisenhower at 7:30. And the boys game between Wenatchee and Eastmont at the Town Toyota Center will tip up at about 8:15 tonight.

Coming up tomorrow in girls basketball action…
Cashmere hosts Medical Lake at 3. Prosser’s at Ephrata while Quincy travels to Selah at 3:30. At 5:45, it’s West Valley at Moses Lake; Eastmont at Davis; and Wenatchee hosts Eisenhower, which we’ll have LIVE on NCWLIFE Channel with Grant Olson on the play-by-play. Then at 6 it’s Warden at Chelan; Manson hosting Omak; and Lake Roosevelt plays at Waterville-Mansfield.
Here’s the schedule for tomorrow in boys basketball. It begins at 4:30 in Cashmere where the Bulldogs host Medical Lake. Prosser plays at Ephrata while Quincy’s in Selah at 5. Then at 7:30, Eastmont plays at Davis; Moses Lake hosts West Valley; Eisenhower is at Wenatchee and we’ll have that LIVE on NCWLIFE with Grant. Also at 7:30 tomorrow night Chelan hosts Warden; Omak’s at Manson; and Waterville-Mansfield hosts Lake Roosevelt.

We’re pleased to report that David is off the balcony at the Town Toyota Center…
David Rayfield has been camping out on the balcony this week selling tickets and raising money for the Bunker and Thomas A. Biddle Foundation to help veterans. He reached his goal of selling 500 tickets yesterday afternoon, just in time to avoid today’s forecast snow storm. Military Appreciate Night is coming up January 18th.
Meanwhile, the Wenatchee Wild are on the road this weekend for a game tonight at Powell River at 7. Then Sunday afternoon at 2 they’ll play in Nanaimo.
Wenatchee’s next home game is a week from tonight when they’ll host Cowichan Valley.
The Seahawks have several question marks on the offensive line heading into Sunday’s playoff game at Green Bay…
Duane Brown is still nursing a sore knee after surgery. Mike Iupati still recovering from a neck stinger. And George Fant didn’t practice yesterday because of a pulled groin. All three players were put on the questionable list yesterday.
That left side of the offensive line will have its hands full with the Packer’s Za’Darius Smith, who comes in with 13-and-a-half sacks this season.
Green Bay is bracing for a snow storm to hit Lambeau Field tomorrow night with 6-to-8 inches of snow and heavy winds. Sunday’s forecast is for sunshine and 23-degrees.
Again, here’s a look at the playoff schedule for the weekend. It’s supposed to be sunny at 67 tomorrow afternoon in Santa Clara where San Francisco hosts Minnesota at 1:35 on NBC. Then the Titans and Ravens kick off at 5:15 in Baltimore under rain and temperatures in the 60’s in CBS.
There’s a winter storm warning in Kansas City tonight but things are supposed to moderate with temperatures in the mid-30’s for Sunday’s 1:05 kickoff between the Chiefs and Houston Texans on CBS. The Seattle and Green Bay wrap up the weekend with a 3:40 kickoff at Lambeau Field.

Thanks Eric.
Ski Trails Opened -As we leave you tonight, good news for cross-country skiers as the Forest Service road to the Echo Ridge Nordic Ski Area opened this week. About 10 miles from Chelan, the unique cross-country skiing area has more than 25 miles of groomed trails that includes views of the Enchantments, Pyramid Peak and the Okanogan Highlands. There is a drop box to pay for using the trails, with a cost of $10 per day for adults. Kids 17 and younger can ski for free.
Remember, if you have a video of the day, you’d like to see on the NCWLIFE Evening News, message us on our Facebook Page at the NCWLIFE Channel.
**Now let’s check in with Dan Kuntz for a look at what’s coming up tomorrow morning on Wake Up Wenatchee Valley, Dan. . .
And that’s going to do it for our newscast tonight. For more on these stories and other news from around North Central Washington, you can find us on Facebook or our website at ncwlife.com. And, remember, if you see news happening we’d like to hear from you. You can send us an email at news@ncwlife.com, or give us a call 888-NCWL (6295). I’m Grant Olson, thanks for joining us and have a great weekend.