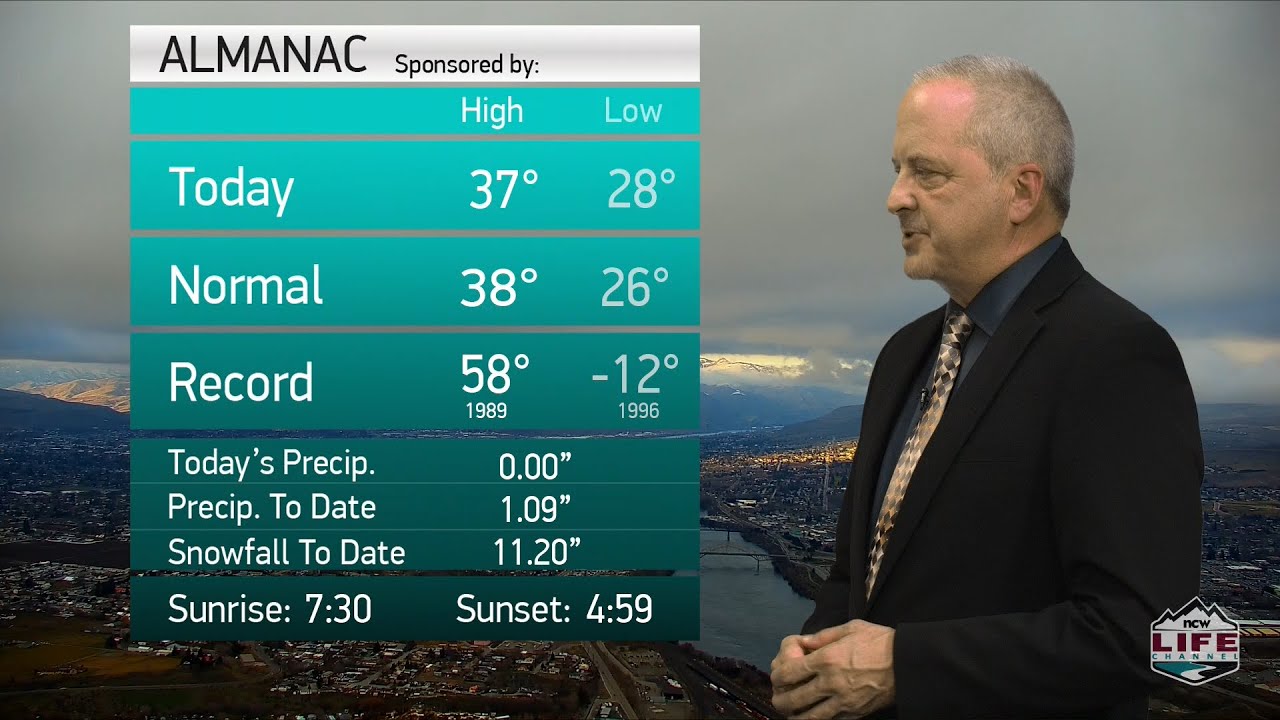 Good evening and welcome to the NCWLIFE Evening News. I’m Grant Olson. Before we get to today’s top news stories, let’s take a quick look outside our weather window.

Welcome back, and in other news. . .
WVC Faculty Union -Wenatchee Valley College faculty members say their dissatisfaction with College President Jim Richardson continues after the Board of Trustees recently dismissed their allegations of fiscal mismanagement. A projected one million dollar budget shortfall is forecast for the upcoming year. President Richardson attributed the crisis to lower than expected student enrollment numbers. The resulting layoff of 21 non-faculty employees and forced furlough days for some teaching staff members led to a vote of no confidence against the President by WVC’s faculty union. . .
In a recent NCWLIFE In Focus interview with Steve Hair, Union President Patrick Tracy shared his group’s concerns over the President and Trustees handling of the budget. The Union claims that there were warning signs of future money woes that were ignored. . .
The faculty union also alleges that the college has failed to maintain its budget reserves which they claim has led to the current crisis. College trustees have stated their support for Richardson and have rejected the Union’s request for his ouster.
Grant County-Supreme Court -A murderer who’s serving 25 years for gunning down an Ephrata man on his doorstep must be re-tried by a special prosecutor. The state Supreme Court said Thursday the Grant County Prosecutor’s Office can’t oversee the case against David E. Nickels, because elected prosecutor Garth Dano previously represented him. A jury convicted Nickels eight years ago for the 2009 murder of Sage Munro, but that verdict was overturned on appeal. The Supreme Court ruling says using an outside prosecutor for his retrial, quote, “is required to preserve the appearance of a just proceeding.” Steve’s In Focus interviews with Patrick Tracey and President Jim Richardson are available on demand on our website at NCWLIFE.com.
Ice and Fog-Freezing fog made for dangerous driving in the Quincy area this morning and led the school district to cancel classes for the day. In addition, White Trail Road between Highway 28 and Highway 281 was closed for much of the morning because of ice on the road and thick. Traffic was rerouted through Quincy during the closure. In December under similar conditions, A tour bus and Quincy school bus collided on White Trail Road, killing the tour bus driver and injuring several students.
-You’re watching the NCWLIFE Evening News. Coming up next, tonight’s feature story and your complete local weather forecast. That and much more still to come on the NCWLIFE Evening News, stay with us.
Welcome back to the NCWLIFE Evening News. . .
Kennel Kameos -Time now for our weekly Kennel Kameos feature from the Wenatchee Valley Humane Society. Tonight, NCWLIFE’s Megan McPherson introduces us to Bashful the cat. . .
– And that is a look at your local weather forecast, coming up next, tonight’s sports report with Eric Granstrom and more as the NCWLIFE Evening News continues right after this.

Cashmere used a big third quarter to open up an 11-point lead and go on for a 72-50 win over La Salle in boys basketball last night…
Sam Phillips led the way with 23 points while brother Nate pumped in 20. The Bulldogs held the Lightning to just 6, fourth-quarter points en route to improving to a 14-and-3 mark on the season.

The Wenatchee Valley Knights exploded for 43-second half points and cruised to an 82-61 win over Walla Walla last night…
Malik Parsons led the way with 31-points while Nian Allen had 13 and Abdul Abdullah chipped in 12.
The Lady Knights had a furious fourth-quarter comeback fall just short to the Warriors, falling 66-63. Natalie Andreas led three players in double-figures for Wenatchee Valley with 19.
CJ Elleby made a step-back 3-points with four seconds left to lead Washington State to a 67-65 win over Arizona State last night in Pullman.
Coming up tonight on the Men’s College Schedule, Washington hosts Arizona at 6 on ESPN2. #2 Gonzaga plays at Santa Clara at 7:30 on CBSSN. Also at 7:30, Central Washington takes on Simon Fraser.
As for the women’s schedule tonight, #12 Gonzaga hosts San Diego at 6 o’clock.It’s slim pickings for the prep basketball schedule tonight…
The Manson girls play at Entiat at 5:45 with the boys to follow at 7:30.The Big-9 swimming and diving league championships will take place today in Moses Lake…

The Diving Championships will get going first at Noon followed by the Swimming Championships at 4 o’clock.The Caribou Trail League will make up a wrestling double-dual in Chelan tonight…
Okanogan will face Omak and Chelan at 6. Cashmere also takes on Chelan at 6. Then at 7, it’s Omak and Cashmere. In the CWAC tonight, Quincy hosts Ellensburg while Toppenish is at Ephrata at 7.
Wenatchee will celebrate its seniors tonight when it hosts Eastmont. The senior celebration will get underway at 7 followed by the girls varsity matches, then the boys. Eric Granstrom will be joined mat side by his Dad Dave tonight for the play-by-play here on the NCWLIFE Channel following hockey at about 9 o’clock.The Wenatchee Wild let one slip through their gloves on the ice in Vernon last night 4-to-3…
Wenatchee built a three-to-one lead on goals by Tyler Young, Quinn Emerson and Nick Cafarelli. But the Vipers came storming back with three, unanswered goals in the third period to win it.
Arch Ecker had the call on the Wenatchee Wild Hockey Network, video courtesy of Hockey TV…

Wenatchee continues on the road tomorrow in Trail at 7 o’clock before returning home Saturday for Guns N Hoses against Coquitlam. We’ll have Arch Ecker on later this morning on Wake Up Wenatchee Valley to talk about this weekend’s game.Speaking of hockey, it’s Hockey Night tonight on the NCWLIFE Channel…
We’ll have the Wild’s game against the Surrey Eagles from a couple Saturday’s ago at the Town Toyota Center. The game went into overtime, so you don’t want to miss it. Arch Ecker has the call starting at 7 tonight here on the NCWLIFE Channel.

Thanks Eric.
Weekend Events -Before we leave you tonight, let’s check in with NCWLIFE’s Megan McPherson once again for a look at what’s happening around the valley for you to enjoy this weekend. . .
Now let’s check in with Dan Kuntz for a look at what’s coming up tomorrow morning on Wake Up Wenatchee Valley, Dan. . .
-And that’s going to do it for our newscast tonight. For more on these stories and other news from around North Central Washington, you can find us on Facebook or our website at ncwlife.com. And, remember, if you see news happening we’d like to hear from you. You can send us an email at news@ncwlife.com, or give us a call 888-NCWL (6295). I’m Grant Olson, thanks for joining us and have a great night.