The NBA has suspended its season due to the coronavirus. The league announced last night that it will suspend the rest of its schedule indefinitely after a player with the Utah Jazz tested positive for Covig-19. The player, Rudy Gobert, and his team are under quarantine.

In addition, teams the Jazz played in the last 10-days have been advised to self-quarantine (Cleveland, New York, Boston, Detroit and Toronto).

Since this morning, there are several other breaking stories related to sports and the coronavirus…

Major League Baseball has cancelled the rest of Spring Training and is postponing the start of its regular season.

The NHL Season has been suspended until further notice.

The college basketball conference tournaments, including the Pac-12 tournament in Las Vegas, have been cancelled. In addition, the NCAA followed suit and cancelled both the men’s and women’s tournaments for this year.

Major League Soccer has moved to suspend its season until further notice.

Local prep sports expected to be cancelled until after spring break

Some weather-related changes have occurred locally. The Wenatchee Baseball jamboree with Mount Vernon and Lake Stevens that was schedule for this weekend has been postponed with snow in the forecast. Also, the Wenatchee Track Jamboree has been postponed, right now until next week. It may be cancelled altogether.

The Seattle Dragons XFL game against Los Angeles Sunday at CenturyLink Field will be played, but no fans will be allowed in the stadium.

The Seattle Mariners were looking for a new site, possibly at their complex in Peoria, Arizona, to host its season opener. They were supposed to host the Texas Rangers at T-Mobile Park in Seattle March 26th. Now it looks like the games may happen sometime in April.

And the Seattle Sounder’s MLS match vs. Dallas that was scheduled for March 21st at CenturyLink Field has been postponed.

The NWAC Basketball Tournament was also a casualty of the coronavirus…

The Northwest Athletic Conference announced at Noon today that the rest of the tournament, which had been moved from Everett to Oregon because of the virus, has now been cancelled. The Wenatchee Valley men were supposed to play tonight at 10 and the women tomorrow at 2. Now, the entire tournament has been cancelled.

Cougars surprise Colorado…not that it matters

Not that it matters now, but the Washington State men surprised Colorado last night in the 1st, and what turns out, only day of the Pac-12 Tournament…

Despite Isiah Stewart’s 29-points and 12-rebounds, the Washington Huskies fell in the first round of the Pac-12 Tournament to Arizona 77-70. The Wildcats avenged a loss in the regular season finale to Washington 4-days ago to advance to the tournament’s quarterfinals against USC.

CJ Elleby scored 30-points and hit six 3-pointers to help Washington State upset Colorado 82-68 last night. The Cougars will face Arizona State tonight at 8:30 in the quarterfinals. The game can be seen on FS1.

Trailing 2-0 in the top of the 6th, Jose Marmolejos stepped up with the bases loaded and delivered a three-run double to deep center field. Seattle tacked on one more run in the 7th before the game was called in the 8th for rain.
Austin Nola went 1-for-3 at the plate with a triple and Marco Gonzales had mixed results in his start on the mound. The former AppleSox went 3-and-a-third, allowing 2-runs on 4-hits with 2-walks and 5-strikeouts.

The Padres’ announcers had the call on the Fox Sports West… 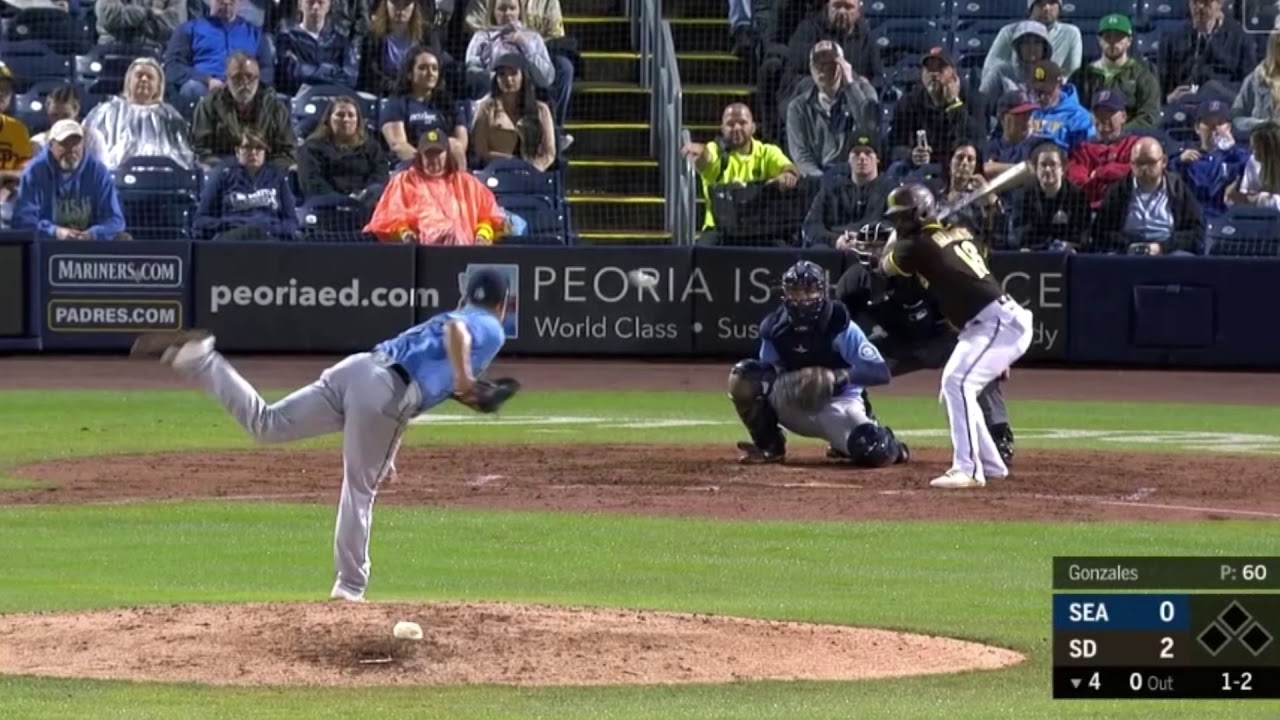 Seattle was supposed to be back in Peoria today, but the game has been cancelled.