Moses Lake won five matches by pin to beat Wenatchee 53-to-12. The Chief’s Camron Regan, Joey Feidig, Saul Villa and Jeremiah Martinez all won by fall to help Moses Lake improve to 3-and-1 in its Big-9 dual record.
Wenatchee’s first of three wins on the night came in overtime for Alan Suan at 160-pounds. Eric Granstrom had the call here on the NCWLIFE Channel… 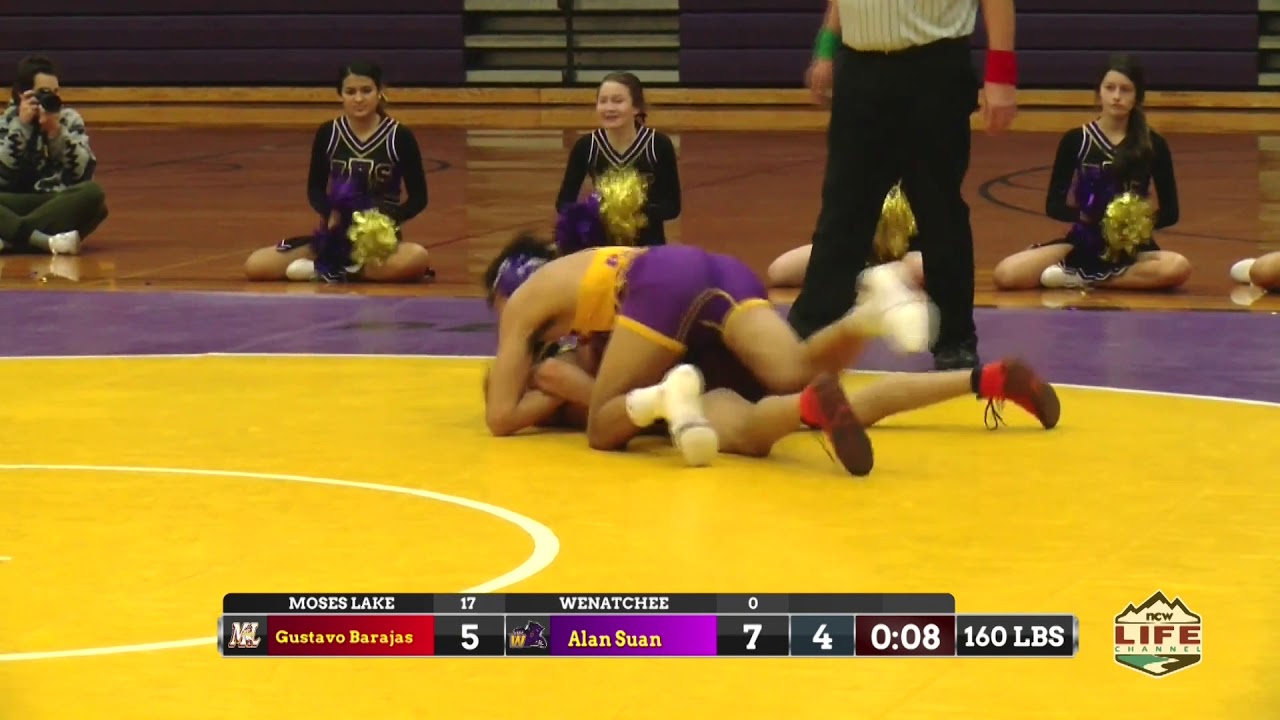 Also on the mats last night, Eastmont traveled to Davis and picked up a 51-30 win. Ephrata beat Grandview 60-24 and Prosser 51-30. Quincy was also a winner, beating Prosser 42-35 and Grandview 54-21. The Wenatchee girls also were victorious last night, downing Moses Lake 30-to-24.

Coming up this weekend, Cashmere, Eastmont, Ephrata, Moses Lake, Quincy and Wenatchee’s girls teams will be among 53 total today at tomorrow for the Lady Husky Invite in Othello. Wrestling gets underway today at 5 and then resumes tomorrow at 10am.

Wenatchee blanked Selah in a non-league match 4-0 while Eastmont swept Moses Lake 4-0. If the Panthers beat West Valley Tuesday, that sets up a winner-take all match Thursday at Nob Hill Lanes between Wenatchee and Ike. The league champion will get to host the District Tournament on January 31st.

Eastmont and Davis victorious in swimming and diving

In the pool yesterday…

Coming up tomorrow, Eastmont and Wenatchee will join 6 other teams at Whitman College for a swim meet beginning at Noon.

Gonzaga women win on the road

The Women’s College Basketball schedule is sprinkled throughout the weekend…

Tomorrow, Wenatchee Valley hosts Spokane at 2. Montana State and Eastern Washington tip it up at 2:05 in Cheney. #16 Gonzaga travels to San Francisco while Central Washington hosts Simon Fraser at 5.

Eastmont hosts Sunnyside tonight at 5:45. Grant Olson will have the play-by-play on the NCWLIFE Channel beginning at 6:30 after the Evening News. Also at 5:45 tonight, Wenatchee’s at West Valley; Ephrata hosts Wapato; Grandview’s at Quincy; Cascade hosts Omak; and Chelan is at Cashmere. Manson hosts Soap Lake at 6 while Waterville-Mansfield battles for first place at Liberty Bell.

Entiat has a date at Wilbur-Creston at 4:30. Wenatchee hosts Moses Lake at 5:45. Eric Granstrom will be courtside at Wenatchee High School with our pregame beginning LIVE at 5:30. Kennewick plays at Eastmont at 5:45. Then at 6, Chelan’s at La Salle; Waterville-Mansfield plays at Soap Lake; and Liberty Bell visits Manson.

Chiefs and Panthers tip up at 7:30 on NCWLIFE Channel Saturday night

By the end of the day on Sunday, we’ll know this year’s Super Bowl participants…

Tennessee and Kansas City begin play for the Lamar Hunt Trophy and the AFC Championship at 12:05 at Arrowhead Stadium. That kicks off at 12:05 on CBS.

Then at 3:40 on FOX, it’s Green Bay and San Francisco vying for the George Hallas Trophy at Levi’s Stadium in Santa Clara.