The Chiefs bagged their 4-wide, spread offense and opted for a bunch-formation backfield with three running backs to ground-and-pound their way to victory. Eric Granstrom and Grant Olson had the call on the NCWLIFE Channel. 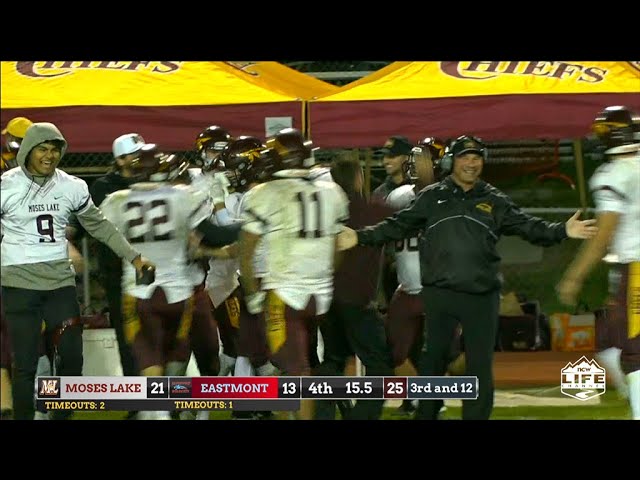 Sergio Guzman was the workhorse on the night for Moses Lake, rushing 29-times for 105-yards. Quarterback Brock Clark rushed for two touchdowns and found tight end Tell Rathbun on a 5-yard touchdown pass with 5:11 left for the game’s final score.

The Chiefs scored first on its second possession of the ballgame, capping a 5-play, 57-yard drive on a 7-yard touchdown run by Clark. Eastmont took advantage of a strip-sack by Logan Schneider and converted the turnover into a 5-play, 39-yard drive with Colby King scoring the game-tying touchdown from 14-yards out. The Wildcats got the ball back with 8:16 remaining in the first half at its own 8-yard line and scored the go-ahead touchdown on Austin Ruffins’ 56-yard scamper up the Moses Lake sideline. A bad snap on the extra point led to the kick being blocked, so Eastmont’s lead was 13-7.

Moses Lake’s first drive of the second half look to stall on a 4th and 1 at it’s own 29-yard line, but the Chiefs brought in a bunch formation and Guzman dove over the right side to pick up the first down. Moses kept with the formation and pounded the ball right down Eastmont’s throat, scoring on a 16-play, 80-yard drive on Clark’s 1-yard sneak.

Eastmont’s first possession of the second half stalled at the Chief’s 19 and Cameron Pope’s 36-yard field goal attempt missed wide right and Moses Lake still led 14-13. The Chiefs fumbled their next possession and Eastmont attempted another 40-yard field goal. This time, a bad snap led to a block with the ball being scooped up by Kyson Thomas and returned to the Wildcat 32-yard line. 9-plays later, Clark found Rathbun for the 5-yard touchdown pass and Moses Lake was up 21-13.

Eastmont worked the ball down the field quickly in the closing minutes of the 4th quarter and looked to possibly tie the game when running back Colby King was stripped of the ball at the Moses Lake 5-yard line. The Chiefs recovered and converted a 3rd down on a quarterback keeper around the left end and ran the clock out to win the game.

Eisenhower closed the gap to 17-14 early in the second half, but Sunnyside responded with four, unanswered rushing touchdowns to beat the Cadets 44-14 Friday night. Sunnyside and Moses Lake are the only two undefeated teams remaining in Big-9 play.

Cascade traveled to Quincy Friday night in Caribou Trail League play and shut out the Jackrabbits 42-nothing. Omak used a huge second half to beat Chelan during the Goat’s homecoming night 40-to-19.