Major League Baseball’s post-season continued with high drama in St. Louis Sunday, where the Atlanta Braves rallied for three runs in the top of the 9th to beat the Cardinals 3-1…

Trailing one-nothing and down to their last out, Atlanta’s Dansby Swanson doubled in Billy Hamilton to tie it at one. Adam Duvall followed with a 2-run double and the Braves lead the series 2-1.

Not so much drama in Washington, where the Dodgers took a 2-1 series lead over the Nationals with Sunday’s 10-4 win. Justin Turner led the way at the plate, going 3-for-6 with a 3-run home run while David Freese was 3-for-3 with 2-runs.

Tampa Bay stayed alive today by teeing off on Zack Greinke in a 10-3 win over the Astros. Of the four home runs hit by the Rays, three came off the Houston starter. Game 4 of the series will be tomorrow in Florida at 1:15 on FS1. Houston still leads the series 2-1.

First, in a game you saw right here, Omak held on to beat Cashmere 44-36. The Pioneers raced out to a 30-14 halftime lead, so we’ll pick up the highlights to start the 3rd quarter. Eric Granstrom and Grant Olson had the exciting call on the NCWLIFE Channel… 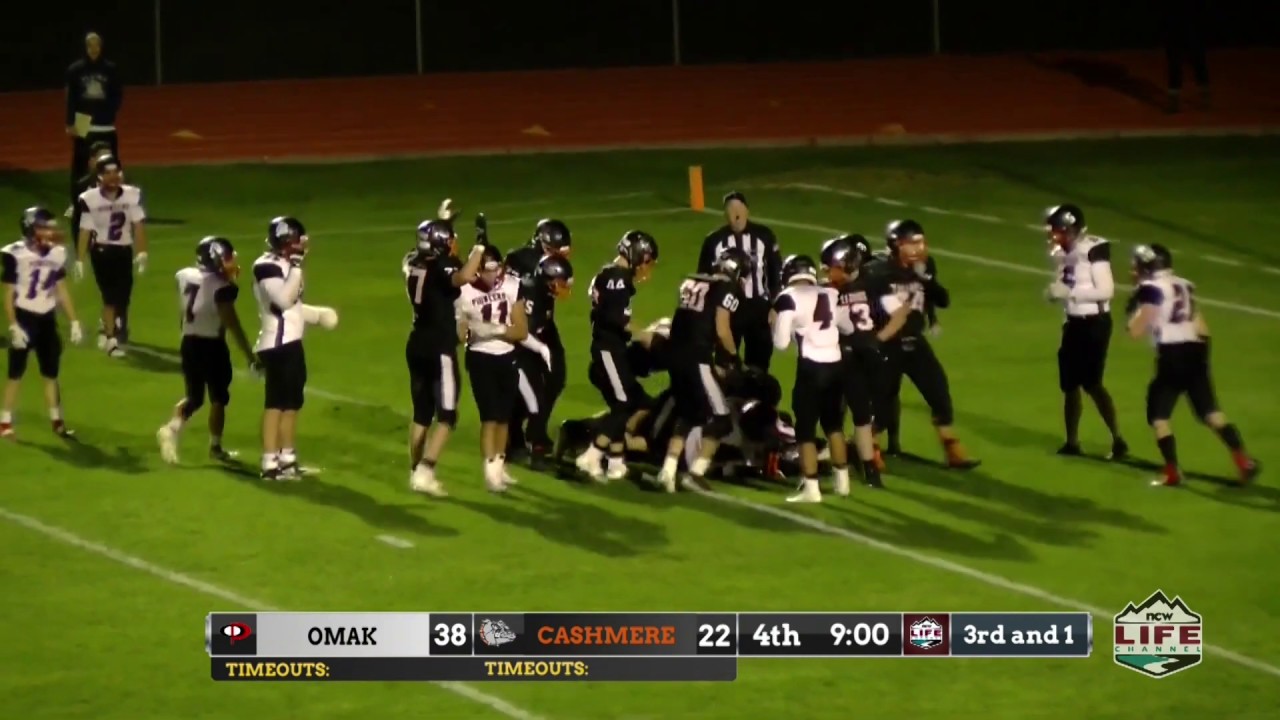 In the rest of the Caribou Trail League, Okanogan got by Chelan 20-to-17 and Cascade won its homecoming game over Cheney 21-14.

Wenatchee cruises while Eastmont gets scare in Yakima

Nate Blauman had 229-yards and 3-touchdowns to lead Wenatchee over Moses Lake 42-13. The Panther defense forced six Chief turnovers.
Carson Everhart scored twice on the ground and Austin Popoff added another as it took two overtimes for Eastmont to beat West Valley 23-20.

In the C-WAC Friday, Othello beat Ephrata 27-8 while Quincy was a winner over Wapato 34-nothing.

In Central Washington B league football, it was Brewster over Manson 35-21. Oroville topped Northwest Christian 13-11. Almira-Coulee-Hartline had no trouble with Entiat, winning 74-36.

Eastmont homecoming on NCWLIFE vs. Davis on Friday Night Lights

Coming up this Friday under the lights on the NCWLIFE Channel…

We’ll be back at Wildcat Stadium for the Eastmont Wildcats and Davis Pirates. It’s Eastmont’s homecoming game as they try to remain undefeated on the season against an upstart Pirate’s team that’s 3-and-2 so far. Eric Granstrom and Grant Olson will have your play-by-play with the pregame at 6:45 here on the NCWLIFE Channel.

It was not a good weekend for our college football teams…

The #15 Washington Huskies laid an egg in Palo Alto, falling to unranked Stanford 23-13. Cameron Scarlett rushed for 151-yards and a touchdown while Davis Mills threw for nearly 300-yards and a score to lead the Cardinal to the win. Washington was held to just 88-rushing yards in the game.

Sacramento State’s Kevin Thomson threw for three touchdowns and ran for two others as the Hornets beat Eastern Washington 48-27. This despite 309-yards passing and 103 yards rushing by Eric Barriere.

West Texas A&M ran out to a 34-10 halftime lead and cruised past Central Washington 48-41. The Wildcats made it closer, scoring 16-points in the final three minutes.

On the Les Schwab Prep Scoreboard from Saturday…

A weekend of sweeps in volleyball

The Cascade boys were victorious in their own Invitational Cross Country meet Saturday. Eastmont was 3rd. The Eastmont girls won the Leavenworth Invite while Cashmere was 3rd.

In Yakima, Kamiakin swept the boys and girls sides of the Sunfair Invitational. The Wenatchee boys placed 5th while the Wenatchee girls were second.

It begins with volleyball tomorrow night where the Eastmont Wildcats return home from Phoenix and the Nike Tournament of Champions to host Moses Lake at 7. Then Hockey Night Thursday features the Wenatchee Wild and Merritt Centennials. And, as we mentioned, we’ll help Eastmont celebrate homecoming with Friday Night Lights between the Wildcats and Davis at 7 o’clock.

Speaking of the Wenatchee Wild, they dropped two heartbreakers over the weekend at the BCHL Showcase in Penticton…

Wenatchee got goals from Luke Ormsby and Harrison Scott Friday, but fell short to Salmon Arm 3-2. Then on Saturday, Nick Caferelli, Quinn Emerson and Matt Dorsey did what they could to put the Wild back on the winning track. But Penticton would have none of it as the Vees won 5-3.

The Wild return home this Friday and Saturday to host the West Kelowna Warriors at the Town Toyota Center. Both games start at 7:05.