The Mariners split a four-game series with the Angels over the weekend, earning a 9-5 victory Sunday. Donovan Walton provided a spark as the 9th man in the batting order for Seattle that helped Logan Gilbert earn his first victory on the mound as a professional. Walton’s big hit came with the game tied at 1 in the top of the 3rd…

It took until his 5th start in the Majors, but the run support helped Logan Gilbert notch his first win by going 5-innings and giving up just 1-run on 2-hits with 7-strikeouts…

Despite a wild 9th inning that saw both teams combine for 8-runs, Seattle hung on for the victory. Manager Scott Servais was happy for Gilbert to get the win…

Seattle has the day off today before beginning a 3-game series in Detroit tomorrow afternoon.

Taking a look at the rest of the American League West on Sunday, Jose Altuve and Chas McCormick hit home runs in Houston’s 6-3 win over Toronto at Sahlen Field in Buffalo, New York. The Blue Jays still don’t have a home field in Toronto because of COVID-19.

Tampa Bay erased a 1-run deficit with three in the 8th and scored another 4 in the 9th for good measure in a 7-1 win over Texas. Yandy Diaz had a home run and drove in three for the Rays.

Germán Márquez and two relievers held Oakland to 1-run on 8-hits and struck out eleven A’s batters in Colorado’s 3-1 win.

Oakland still leads the West by a game over Houston. Seattle remains 5-games back in 3rd place.

The Wenatchee AppleSox went 1-and-2 over the weekend in Portland to begin West Coast League play, including Sunday’s 11-1 defeat at the hands of the Pickles…

Bradley McVay and five relievers held Wenatchee to one run on 4-hits and struck out 10. The lone bright spot for Wenatchee came off the bat of catcher Ben Leid in the top of the 3rd… 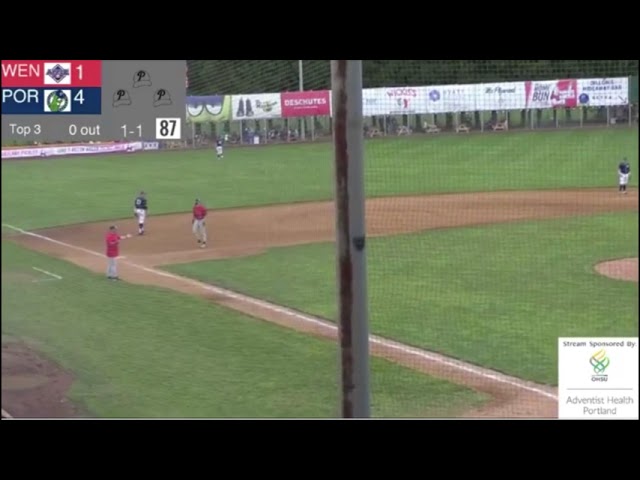 The opposite-field home run caused some confusion for both Leid and the umpires, who had to confer before deciding the ball had cleared the fence and was a solo home run.

The AppleSox have the day off today before returning home to host the Walla Walla Sweets in the first of three games tomorrow at 6:35. After three with Walla Walla, Wenatchee hosts Bellingham for three this weekend. By the way, our own Eric Granstrom will have the honor of throwing out the first pitch prior to Thursday’s game against the Sweets.

In other West Coast League play Sunday, Jaden Sheppard’s two-run single in the bottom of the 8th was the difference for Cowlitz as the Bears came from behind to beat Walla Walla 5-4.

Kody Darcy hit two home runs and drove in 4 to lead Ridgefield to a 13-nothing win over Bend. The Raptors swept all three games from the Elks over the weekend.

Garett Lake’s 2-run home run highlighted a 3-run 10th inning as Port Angeles overcame Bellingham 10-7. The Bells led the game at one point 7-nothing before the Lefties began their comeback in the 6th.

Chase Graves’ bases-loaded triple helped lead Yakima Valley to a 10-1 win over Corvallis. Kenny Johnson earned the win on the mound, going 6-innings and allowing no runs on 3-hits with 6-strikeouts.

The only game on the schedule in the West Coast League today has Port Angeles hosting Corvallis at 6:35 tonight.

On the schedule tonight, Cashmere travels to Quincy while Manson hosts Moses Lake Christian at 7:30. Waterville-Mansfield hosts Bridgeport tonight at 8.

Cascade Christian Academy beat Wenatchee’s JV 42-to-12. Chelan got by Quincy 49-27. Lake Roosevelt and Omak’s game Friday was cancelled. So too was the Raider’s game against Brewster Saturday. Chelan edged Omak Saturday 46-42.

On the girls schedule today, Cashmere plays at Quincy at 6. Also at 6 it’s Manson hosting Soap Lake and Cascade Christian Academy at Entiat. The Bridgeport and Waterville-Mansfield girls tip it up at 6:30.

Eastmont entertains Moses Lake while Wenatchee takes on Selah. It all gets underway at 3:30.

Busy night celebrated the Class of 2021 at WVSO

Chad Holaday continued his dominance in the Holaday’s Custom Muffler B-Mods with a victory. Ephrata’s Bart Hector, Junior was second followed by Patrick Mullins of Naches in third.

It was a night for out-of-towners in the three other classes, beginning with the Plumb Perfect Roadrunners. Arlington’s Dawson Cox won the main event with Jackson Beckel of Snohomish taking second. East Wenatchee’s Kyle Spaulding was 3rd.