After two scoreless periods, the Penguins scored the game’s first goal at the 8:41 mark of the 3rd period to take a 1-oh lead. Things didn’t look good for Seattle until Jared McCann came through late in the period… 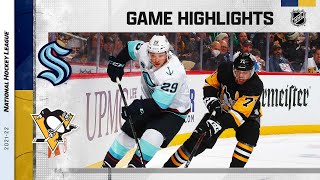 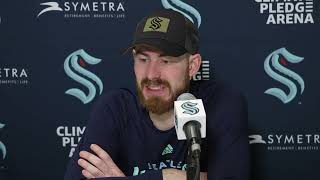 Coach Dave Hakstol says it’s great to get a road win like that, but it’s the way the Kraken continue to attack in the offensive zone that he really likes… 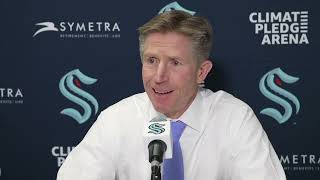 Seattle continues its road trip tomorrow in New York against the Islanders at 2 o’clock on ROOT Sports Northwest.

The Wenatchee Wild stumbled out of the gates in the opener of three games against Penticton last night, falling 5-to-2… 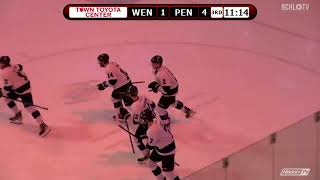 The good news for Wenatchee is that they get to try it again tonight at 7:05. The two teams wrap up the three-game set tomorrow night at 6 o’clock.

No. 2 Gonzaga had no trouble with Loyola Marymount as the Bulldogs win 89-55. Chet Holmgren led the way with 21-points while J.D. Strawther had 10.

Washington held on to beat Colorado 60-58 as the Huskies were led by the 26-points from Terrell Brown, Jr.

In women’s college basketball last night, 5th-ranked Louisville beat Florida State 75-62 as Hailey Van Lith had 9-points for the Cardinals in the victory.

Melody Kempton had 14-points while Eliza Hollingsworth scored 12 to lead Gonzaga past Pepperdine 66-54.

Washington State hosts Washington tonight at 7 o’clock on the Pac-12 Network. Gonzaga plays at San Diego tomorrow at 2. On Sunday, the Cougars and Huskies will play in Seattle at Noon while Louisville battles 21st-ranked Duke on ESPN.

On the men’s courts tomorrow, Washington hosts Utah at 2 o’clock on the Pac-12 Network. Eastern Washington plays at Montana at 6 on ESPN-plus. Gonzaga hosts Portland at 6 o’clock. Washington State is home Sunday against Colorado at 7 o’clock on FS1.

Coming up tonight in girl’s basketball…

We’ll have Wenatchee and Davis LIVE on our Facebook page starting at 5:45. Moses Lake hosts Eisenhower while Quincy’s at Omak and Chelan hosts Cascade. At 6 it’s Prosser at Ephrata; Liberty Bell hosts Okanogan; and Brewster’s in Oroville.

In boy’s basketball tonight, Entiat’s at Riverside Christian at 6. Omak hosts Quincy at 7:15 while Cascade visits Chelan. We’ll have Davis and Wenatchee boys tonight at 7:30 here on the NCWLIFE Channel. Other 7:30 games have Moses Lake at Eisenhower; Ephrata hosts Prosser; Okanogan’s at Liberty Bell; and Oroville hosts Brewster.

Coming up tomorrow in girls hoops, Eastmont’s at Moses Lake at 4:45 while Omak hosts Cashmere at 5:45.

On the boy’s side as Bridgeport welcomes Riverside Christian at 6 while Brewster hosts Liberty Bell. Eastmont’s game at Moses Lake has been postponed because of COVID in the Chiefs program. Cashmere and Omak play up north at 7:15.

Backing up to some wrestling results from last night, Sunnyside beat Wenatchee 55-22. Quincy downed Cashmere 44-33 and topped Cascade 54-21. Chelan beat Cascade 42-24 but fell to Cashmere 51-6. Selah had no trouble with Ephrata, winning 66-to-9.

Super Bowl contestants to be determined Sunday in NFL

It kicks off at Noon on CBS when Kansas City hosts Cincinnati for the Lamar Hunt Trophy. San Francisco kicks off in LA against the Rams for the George Halas Trophy at 3:30 on FOX.