Amid much fanfare during a 90-minute live event on ESPN-2 yesterday at Gas Works Park, the Seattle Kraken announced its first 30-players taken in the NHL Expansion Draft. Of course, the telecast included flying fish at Pike’s Place Market; views from atop the Space Needle; a sneak peak at Climate Change Arena; Seattle sports celebrities Gary Payton, Shawn Kemp, Marshawn Lynch and others; the announcement of selections from atop Mt. Rainier to inside the Seattle Aquarium. The event had a definite Seattle flare.

The roster includes only two players over 30 and 16 that are under the age of 25. Seattle also has the second overall pick in Friday’s NHL Draft.

Rockies down Mariners 6-3 despite 3-HR’s

Keynan Middleton was greeted rudely on a bullpen day as the Seattle starter gave up 5-runs on 5-hits in the first inning.

Of the five hits on the day for Seattle, three of which were solo home runs from Kyle Seager, Luis Torrens and Mitch Haniger…

The day also marked the Major League debut of pitcher Darren McCaughan. The 25-year old out of Long Beach State wound up pitching 5-innings, allowing 1-run on no hits with three walks. Manager Scott Servais was quick to point out the pitching of McCaughan…

Seattle returns home to host the Oakland A’s in the first of four games at T-Mobile Park as Chris Flexen faces Sean Manaea. First pitch is at 7:10 tonight on Root Sports.

Across the rest of the American League West Wednesday, Robbie Grossman, Zack Short and Akil Baddoo each homered in Detroit’s 4-2 win over Texas.

And in Houston, Cesar Hernandez’s solo home run in the top of the 7th was the difference as Cleveland topped the Astros 5-4.

As Oakland comes to town today, the Athletics trail Houston by 3-games in the American League West and are 3-and-a-half games in front of Seattle in the Wild Card race.

Wenatchee broke up a no-hitter with a 2-run sixth-inning but couldn’t muster enough to beat Walla Walla last night, falling to the Sweets 8-to-2…

AppleSox starter Lance Mercado was solid through six innings, allowing just 2-runs on 5-hits with 7-strikeouts. But it was the bullpen that didn’t hold up according to the “Voice” of the AppleSox, Joel Norman… 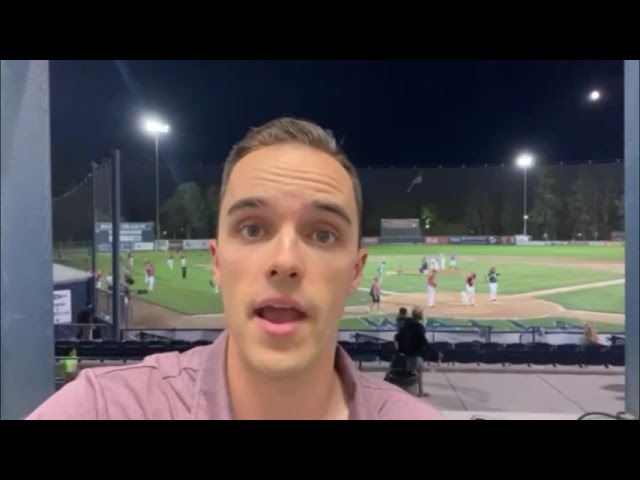 Michael O’Hara and Luk Stuka ended up with two hits apiece to lead Wenatchee in the loss.

Just a reminder as the ‘Sox wrap up the series in Walla Walla tonight, they’ll be back home tomorrow to start a three-game, weekend series against Yakima Valley. We’ll have the game LIVE on the NCWLIFE Channel beginning with the pregame at 6:30.

In other West Coast League baseball last night, Wilson Weber’s 2-run single highlighted a 3-run first inning for Cowlitz, who beat Portland 9-to-1. Weber and Broc Mortensen each drove in 3-runs apiece for the Bears.

John Peck and Coby Morales continues to swing hot bats for Ridgefield as each were 3-for-5 with 3-RBI’s last night in the Raptor’s 8-to-2 win over Port Angeles.

Aaron Plante’s sacrifice fly, RBI in the bottom of the 8th was the winner for Yakima Valley as the Pippins knocked off Bend 6-to-5. Mason Morenco was 3-for-4 at the plate with 2-RBI’s to lead Yakima Valley.

The win was Yakima Valley’s 20th of the season and improved the Pippins to 5-and-3 in the second half of the WCL season. Everyone else is chasing Walla Walla for the second-half playoff spot with Bellingham trailing by a game, Port Angeles a game-and-a-half and Wenatchee 2-games back.

Ridgefield is 2-and-a-half clear of Cowlitz right now for the second-half playoff spot in the South.

The mid-week series wrap up tonight with Wenatchee at Walla Walla; Ridgefield at Port Angeles; Cowlitz hosting Portland; and Bend at Yakima Valley.