The Eastmont Wildcats overcame a sluggish first quarter against Moses Lake and beat the Chiefs 66-21 Friday night. The win ensures Eastmont a shot at the Big-9 League Title and trip to State if it can beat Wenatchee Thursday in the Bridge of Sportsmanship game. 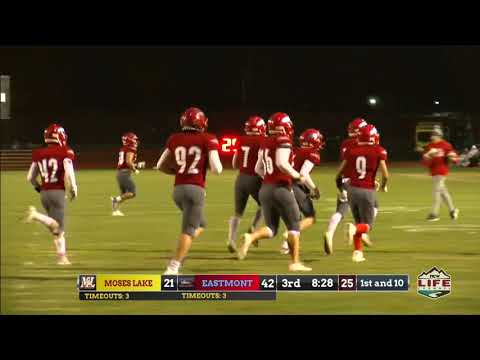 Moses Lake came out to play Friday, taking its first possession down the field on a 12-play, 88-yard drive capped by a 5-yard touchdown run by Lerenz Thomas to put the visitors up 7-0.

Eastmont countered on its first offensive play as Austin Popoff raced 56-yards for a touchdown to tie the game at 7-7. A big kickoff return by Thomas put the Chiefs in good field position at its own 45. Everett Ashely capped a 7-play, 56-yard drive with a 4-yard touchdown run to put Moses Lake up 14-7.

The game turned on the Chief’s next possession as Thomas tried a fake punt and was stopped short of the yard-to-gain by Jeremy Gregerson and Logan Schneider. Eastmont took its first lead two plays later on Carson Talley’s 8-yard touchdown run to make it 21-14. The Wildcats would never trail again.

Everhart hit Austin Ruffins on a flee-flicker, three-handoff/pitch play for a 60-yard touchdown with 3-seconds left in the half to put the Wildcats up 42-21 at half.

The only scoring in the 3rd quarter was a 23-yard field goal by Gregerson to give Eastmont a 45-21 lead heading into the 4th. That’s when Everhart hit Lane Keller on a 2-yard touchdown pass to make it 52-21. Popoff added an 88-yard touchdown scamper to make it 59-21. And backup running back Adrian Vivanco capped the scoring on the night with a 7-yard touchdown run and Eastmont improved to 8-and-1 overall, 4-and-1 in Big-9 play with the 66-21 victory.

Wenatchee lost a non-conference game to Walla Walla Friday 28-21 to give the Panthers two losses heading into next Thursday’s Bridge of Sportsmanship game with Eastmont. Wenatchee is 5-0 in Big-9 play while Eastmont and Sunnyside are 4-1 after the Grizzly’s 28-6 win over Davis Friday.

If Eastmont can knock off Wenatchee Thursday, that would set up a 3-way tiebreaker playoff Saturday in Moses Lake between the Wildcats, Panthers and Grizzlies. The format would be two, 10-minute halves. If there’s a tie at the end of the game, the Kansas tiebreaker would be used. The top two teams advance to the State 4A Tournament.

Cascade surprised Cashmere, winning the Pear Bowl 33-28. The loss knocks the Bulldogs out of any State playoff contention and marks only the second Pear Bowl win for the Kodiaks since 2003.

Omak secured the #1 seed to State with a 41-13 win in the “Backyard Brawl”. Chelan lost a non-league game Friday against Riverside 28-21.

Ephrata ended its season on a winning note, downing Grandview on the road 56-17. Quincy was also a winner in its final game of the season 55-7 over Wapato. The CWAC playoffs begin Saturday at 1 o’clock in Grandview as Selah battles Othello. That’s followed by East Valley (Yak) and Toppenish at 4. The District Title will be determined at 7 between Ellensburg and Prosser.

Fire sends flames shooting through the roof of the 76 station...