A wild weekend of basketball concluded Saturday night at Eastmont High School, where the Wildcats hosted the Wenatchee Panthers in a loser-out, winner-to-State contest. The game saw 12 lead-changes and 8-ties and came right down to the final seconds.

Eric Granstrom had the call here on the NCWLIFE Channel… 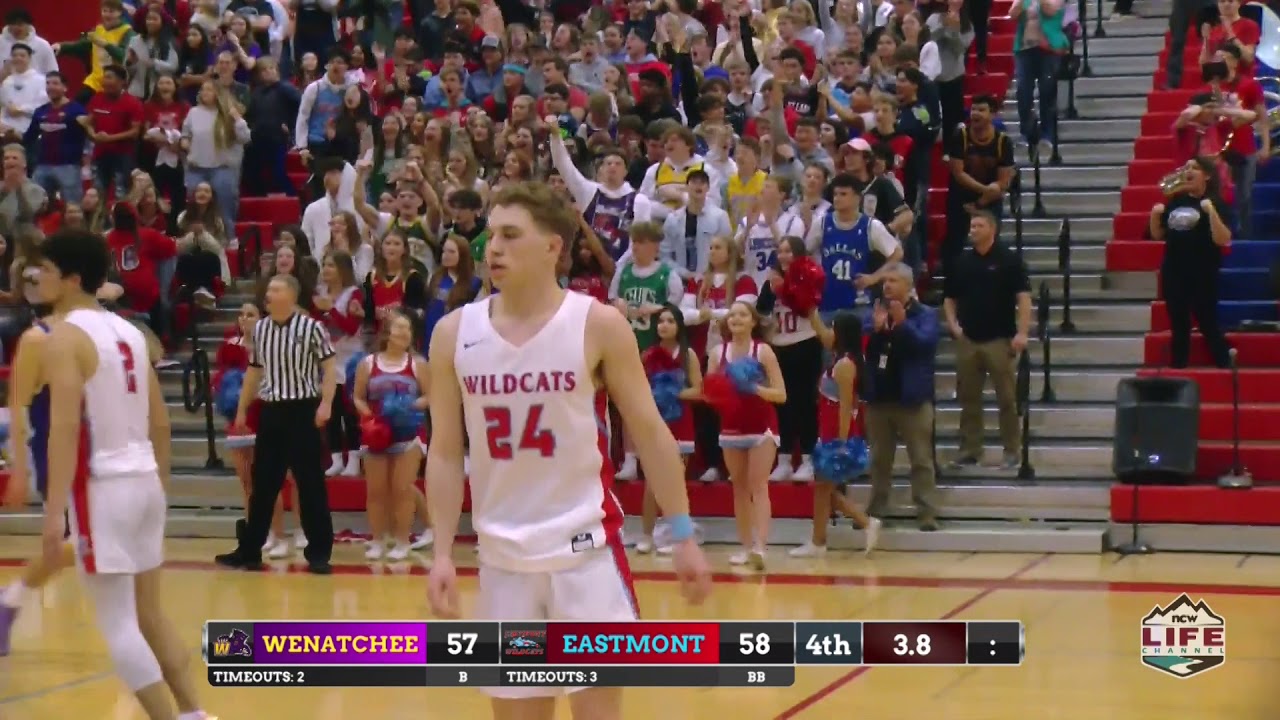 Smith finished with 9-points while teammates Trey Haberlock and Isaac Wellborn had 15 and 14 respectively. Garrett Long led Wenatchee with 21-points.

Eastmont is seeded 15th in the 4-A Tournament and will face #10 Olympia at Tumwater Saturday at 4 o’clock. Eastmont will have to win to advance to the Hardwood Classic in the Tacoma Dome. West Valley is a #6 seed and faces #3 Mt. Si Saturday. The Rams will advance to Tacoma win or lose.

The Moses Lake girls, despite a District Championship and 3-loss season, did not get a top 8 seed to the State Tournament…

As a result, they’ll face a loser-out Regional game Friday against #16 Decatur at Big Bend Community College at 4 o’clock. Sunnyside drew a 15-seed and will face Bellarmine Prep in the Regional Saturday.

Nate Phillips led the Bulldogs with 13-points in the low-scoring affair. Cashmere earned a #2 seed and will advance to the State 2-A Tournament in the Sun Dome next week, no matter what happens Saturday. Their Regional game will be against #7 King’s Way Christian at Wenatchee High School at 4 o’clock.

Omak also advanced with a 67-62 in over Freeman Saturday and will face #1 Seattle Academy in Issaquah Saturday at 2.

The Bulldogs are the #1 seed heading into the Tournament and will advance to the Sun Dome no matter what. Their game against #8 Nooksack Valley tips at 6 o’clock Saturday night. Prior to that, #10 Okanogan faces #15 Meridian at 2 in a must-win game to advance.

The Bear’s Regional game will be against #5 Life Christian Friday at Wenatchee High School at 6 o’clock. Brewster will advance to State regardless of Friday’s outcome.

The Waterville-Mansfield girls earned an 11-seed to the tournament following Saturday’s 52-33 loss to Tri-Cities Prep. The Shockers will face #14 Northwest Christian Saturday at Noon at Wenatchee High School in the Regional. They’ll have to win if they want to get to State B in Spokane next week.

Brewster beat Mabton 47-37 and earned a 13-seed and will face #12 Colfax Saturday at University High in Spokane at Noon.

Riverside Christian boys and girls move on to 1B Tournament

They received a #4-seed for the Regionals and will face #5 Naselle Saturday at Eisenhower at 4 o’clock.

The Riverside Christian girls also advanced to the Regional Tournament with Saturday’s 52-47 win over Pateros. They’ll be a #16-seed in the tournament and face a must-win game Friday against #9 Clallam Bay at Mt. Tahoma at 6 o’clock to advance to the State 1-B Tournament. Moses Lake Christian is a 12th seed and will face #13 Tahola Saturday at 2.

2A Regionals and State draws set

In the 2A tournament…

The Ellensburg girls are District Champions after a 66-44 win over East Valley Saturday. They received a #2-seed to State and will face W.F. West Saturday at 2 o’clock. East Valley’s Regional game will be in Auburn Saturday against Renton.

Connor Elwyn was a State Champion in the 100-backstroke and also led the Wenatchee 200 medley relay team to a title along with Christian Cutter, Andreas Broxon and Ian Walsh.

Eastmont’s Evan Vandersluis took 3rd in the 100-breaststroke and broke a school record in doing so.

The Wenatchee Wild had its 7-game winning streak snapped Friday in Penticton, but will still have home-ice advantage in the first round of the playoffs…

Saturday’s game looked like it would be all-Wenatchee with the Wild scoring three goals in the first period by Ethan Wolthers, Matt Dorsey and Drake Usher. It remained a 3-nil game until the third, when the Vees came storming back, scoring the game-tying goal with 43-seconds left to send it into overtime. Penticton scored the game-winner just over 2-minutes into the extra frame.

Salmon Arm then beat Merritt Sunday to give the Silverbacks the #3 seed in the Interior Division. Wenatchee slid to #4 and will host Vernon in the first of a best-of-seven series Saturday and Sunday. Both games at the Town Toyota Center begin at 7:05.

Here’s a look at the entire, 16-team playoff bracket for the battle for the Fred Page Cup. The Interior Division on the right of the screen will be re-seeded after the first round.