Comprised of a select number of elementary and middle school students, Eastmont Bonga Marimba is led by music teacher Vinny Lee, who started the band after finding inspiration at a school conference and gaining support from a locally-funded grant. 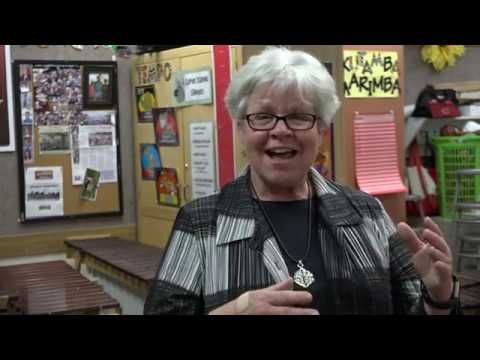 “Our instruments are fashioned after an African-style Marimba and the music that we play is inspired by the Shona culture from Zimbabwe,” Lee said. “I looked up Shona words and I found three different words and one of them was Bonga, and Bonga means wildcat. We’re from all of the elementary schools in the Eastmont School District.”

The students learn every song by listening and memorization, a method Lee says allows them to play more difficult rhythms.

“We can put very difficult rhythms together between instruments because we’re not reading and I can sing or clap a rhythm and they’ll all go ‘oh yeah I get it,'” Lee said. “We can learn much faster because there’s 17 kids in the group and five different sections, and I can teach one kid out of each of the five sections and now they’re teaching the other two or three kids within their sections.”

Lee says this method of teaching allows for the students to grow their leadership skills and learn the material on a deeper level.

“They love it, I have a classroom full of leaders in here,” Lee said.

Eastmont student Peyton Smith says he joined the group because of his background in piano, finding this instrument as a new challenge.

“I keep coming back because I just love the teamwork and just the friendship in this room that keeps the music going,” Smith said.

Students from each of the two Marimba groups have shown growth in maturity and confidence Lee says.

“I think it brings confidence because we’re going out into the public all the time, two years ago we had 21 gigs in one school year,” Lee said. “I don’t let them play a tune [in public] until they know it well, that way when we do go out into public they’re successful.”

Eastmont student Ella Shammo says she can’t help but dance when she performs with her classmates.

“I had heard it in second grade at the talent show, and when I got my [invitation] letter I was just like ‘Oh yeah,'” Shammo said. “It just makes me want to jump and dance.”

Lee says without the funding and support from Eastmont School District this program wouldn’t exist.

“It’s a way that I can end my day on such a good note– everyday, the music is just so uplifting,” Lee said. “I know I’m bringing up this next generation of kids and they’re becoming leaders in their music groups up at school, a lot of these kids are in a band program and they’re going into percussion.”

Eastmont Bonga Marimba practices twice a week, and performs at a variety of venues and events including local businesses, the Apple Blossom Festival and nursing homes. Lee said she is also forever thankful to every parent who provide transportation and help set up for each gig.

Stay tuned to the NCWLIFE Channel for the NCW Magazine next week, where we’ll take a deeper look behind the scenes with Eastmont Bonga Marimba.