It’s been nearly a week since Washington State announced Jake Dickert as the Cougar’s next head coach, but the official presentation was made yesterday in Pullman by athletic director Pat Chun… 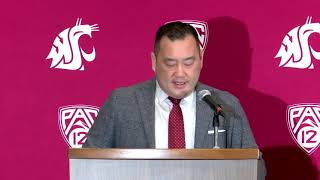 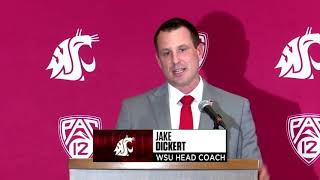 Coach Dickert and the Cougars will learn of their bowl invitation this weekend.

The 10-and-2 Eastern Washington Eagles travel to Missoula to face the 9-and-2 Montana Grizzlies. This will be a battle of the Grizz defense, allowing an average of 13-points per game, against the high flying Eagles offense, averaging 44-points a game. Kickoff is set for 6 o’clock at Washington-Grizzly Stadium on ESPN-plus.

Almira-Coulee/Hartline faces Quilcene for the 1B championship in Tacoma at Noon. That’s followed by Graham-Kapowsin against Lake Stevens for the 4A title.

Royal faces Eatonville in Lakewood at Noon for the 1A championship. Kalama and Napavine play for the 2B title following at 4 o’clock.

The third site is at Sparks Stadium in Puyallup where Bellevue faces Kennewick for the 3A title at Noon followed by the 2A championship between Tumwater and Lynden.

Coming up tonight in girls basketball…

Here’s a look at tomorrow’s schedule as Wenatchee plays at Ridgeline at 3:30. Manson visits Soap Lake at 4:30. Moses Lake tips at Ferris at 5. Wahluke hosts Quincy at 6 while Cashmere plays at Zillah.

On the boy’s slate tonight, Moses Lake plays at Chiawana at 7. The rest of the games at 7:30 have Chelan’s at Eastmont; Cascade travels to Naches Valley; Brewster hosts Kettle Falls; Soap Lake’s at Bridgeport; Entiat hosts Waterville-Mansfield; and Davenport plays at Liberty Bell. Wenatchee and Shadle Park has been cancelled.

On Saturday, it’s Riverside Christian at Waterville-Mansfield at 4. Ridgeline hosts Wenatchee at 5. Moses Lake travels to Post Falls, Idaho at 5:45. Manson visits Soap Lake at 6. Then at 7:30 it’s Quincy at Wahluke and Cashmere at Zillah.

The wrestling season really gets underway tomorrow with several tournaments.

On the men’s college basketball schedule tomorrow, Eastern plays at Omah at 10 in the morning. 3rd-ranked Gonzaga hosts 16th-ranked Alabama at Climate Pledge Arena in Seattle at 5 o’clock on ESPN-2. Washington State will host 20th-ranked USC tomorrow at 3 on the Pac-12 Network.

Washington is scheduled to host No. 5 UCLA Sunday, but we’ll see if that happens with COVID in the Husky program.

The Gonzaga women will host Wyoming tonight at 6. Washington State plays at UC Davis Saturday at 4 on ESPN-plus. 10th-ranked Louisville hosts Belmont Sunday morning at 9 on the ACC Network.

The Wenatchee Wild are in Merritt to face the Centennials in BCHL play tonight at 7. They’ll continue north of the border in Penticton tomorrow night at 6.

Seahawks host 49ers and may have Peterson in lineup

The Seahawks host the San Francisco 49ers at Lumen Field Sunday at 1:25…

Seattle signed veteran running back Adrian Peterson this week, trying to bolster its backfield. Peterson will be wearing No. 21 and hopes to add a boost both at practice and in games… 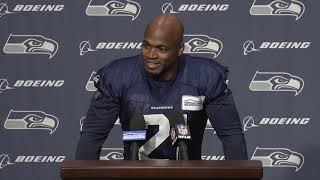 The Seahawks hope Peterson can be a positive injection into a struggling offense. Russell Wilson remains positive and refuses to focus on the negatives that have plagued his performance… 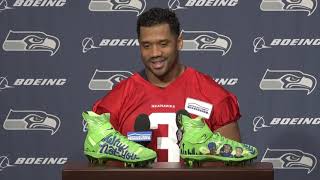