Learn about the YWCA of North Central Washington and its mission to eliminate racism and empower women in episode 50 of Common Sense. Then at the end host Dominick Bonny has some thanks and a plug for the new PBS documentary “Storm Lake” about a smalltown newspaper in Iowa. 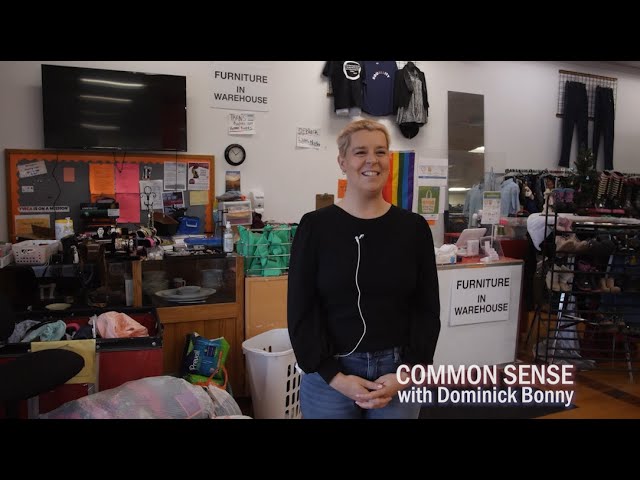 Hello and welcome to episode 50 of Common Sense! I’m Dominick Bonny and in this episode, we’re going to take a look at the Wenatchee Valley YMCA, an organization with a bold, optimistic and altruistic mission: eliminating racism, empowering women and promoting peace, justice, freedom and dignity for all. The organization runs a low-barrier shelter and a thrift shop on Wenatchee Ave. I met up with executive director Rachel Todd recently to learn more about what they do for our community.

Stay tuned for the rest of the interview after the break.

Hello and welcome back, let’s get back to my interview with Rachel Todd, executive director of the Wenatchee Valley YWCA.

I’d like to thank Rachel for her work serving folks on the margins of our community. The folks who fall through the cracks. And as you can see folks do fall through the cracks here in our community. If you’d like to learn more about the Wenatchee Valley YWCA and support them in their mission, go to ywcancw.org right now. I’d also like to thank the folks here at NCWlife for giving me the opportunity to highlight what I think are some of the most important issues in our community, and the entire region. Over the course of the first 50 episodes, we’ve traveled from Wenatchee to Omak, and spoken with veterans, addicts, recovering addicts, parents, retired teachers, police chiefs, pastors, non-profit, and community leaders. I believe that I have shined a light on some of the greatest, and not so great, characters in our community. And I know a few episodes have upset some folks. But that’s ok, because we can’t have accountability and transparency without asking uncomfortable questions from time to time. The last thought I’ll leave you with at the close of this 50th episode is a quote from a small town journalist and publisher of the twice weekly newspaper in Storm Lake, Iowa. His name is Art Cullen and in 2017 he won a Pulitzer prize for what the judges called for writing what the judges called “editorials fueled by tenacious reporting, impressive expertise, and engaging writing that successfully challenged powerful corporate agricultural interests in Iowa.”

Cullen’s philosophy on journalism is the correct one, in my opinion. And he summed up that philosophy in a letter to his son, who after college decided to return to Storm Lake and take up his father’s mantle as a newspaperman. Here’s his advice, and although he’s talking about Iowa, he could be talking about any state in the union. Quote: “A pretty good rule is that an Iowa town will be about as strong as its newspaper and its banks. The best journalism is that which builds communities,” Cullen wrote. “You build your community by publicizing good deeds done, by reporting on the cheats and scoundrels and other politicians, by urging yourself and those around you to do better, by allowing dissenting voices to be heard, and by making certain that your town’s issues are heard in Des Moines and Washington. Use your power to build, and the newspaper will grow naturally.”

Use your power, your voice, to build and the community, the world, will become a better place. That’s the way I see it, and I believe that’s just plain old common sense. If you’re a regular viewer, thank you for tuning in for the first 50 episodes. I hope you continue to watch, but most of all I hope I can live up to the standards set by real deal journalists and columnists like Art Cullen. That’s all for this episode, I’m Dominick Bonny, join me next time for Common Sense!