In this episode of Common Sense, Dominick Bonny focuses on homelessness, specifically chronic homelessness, on the streets of the Wenatchee Valley. 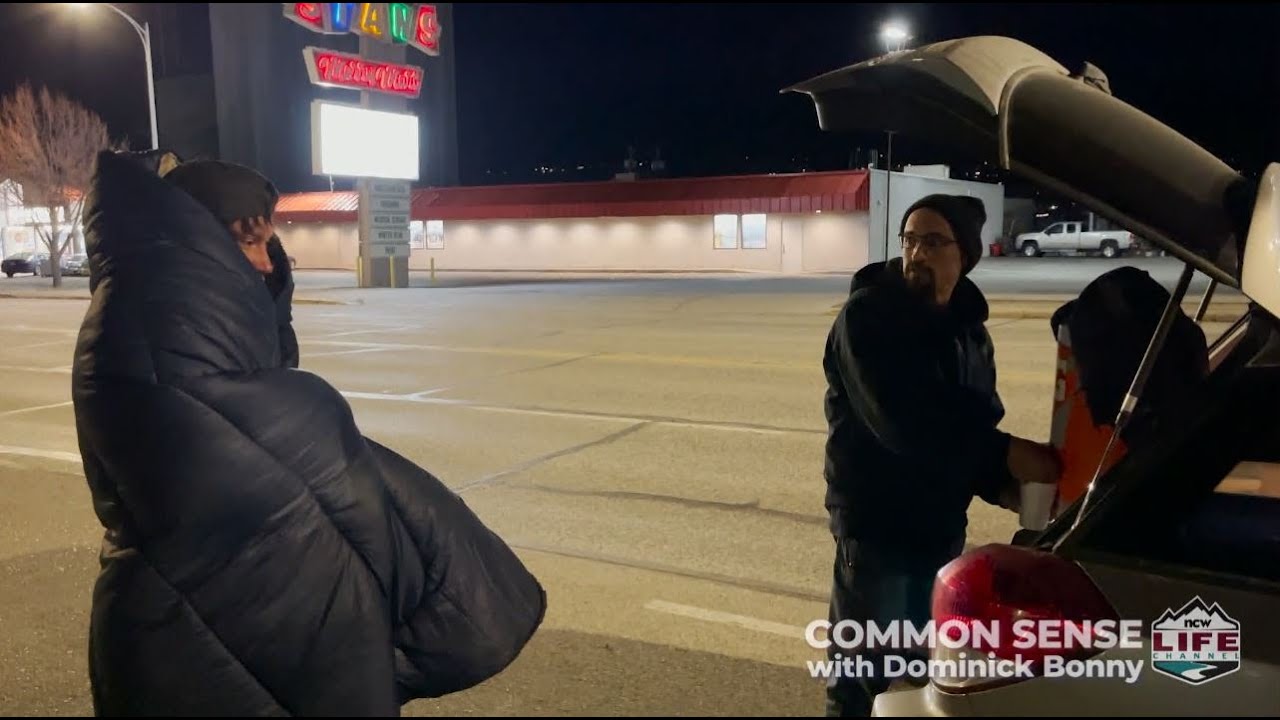 Hello and welcome to Common Sense, I’m Dominick Bonny and this week we’re going to focus on homelessness, specifically chronic homelessness, on the streets of the Wenatchee Valley. Recently, I went out in the middle of the night for a ride-along with Jorge Castañeda, who does volunteer outreach work among this extremely vulnerable group of people. According to a recent whitepaper by a city council of Wenatchee sub-committee, titled “Strategies to House the Unsheltered Homeless Population and Decrease Community Impacts in Chelan and Douglas counties: there are approximately 350 chronically homeless people on the streets of Chelan and Douglas counties. of those people, 266 are classified as “sheltered” (staying in transitional housing or shelters) and 84 are classified as “unsheltered” which means they are living on the streets or in places not meant for human habitation.”

The committee goes on in the whitepaper to say: “Due to their high vulnerability, unsheltered individuals access emergency room medical care at a much higher rate than the general population. Law enforcement expends significant resources responding to emergency calls involving homeless individuals. business owners, especially in the downtown core area, are also impacted when homeless individuals camp in public spaces and impede customer access to businesses.”

According to the sub-committee, which is made up of Wenatchee city councilor Linda Herald, Wenatchee police chief Steve Crown the city’s community development director Glen Devris, and grant programs coordinator Sandra van Osten, Confluence Health alone estimates they lose one million dollars a year due to the continuous use of emergency services by this population. They even have a nickname for the chronically homeless who frequently need emergency medical services. They call them “frequent flyers.”

You can take a look at the subcommittee’s presentation to Wenatchee city council via a link to that meeting recording on YouTube in the show notes of this episode if you go to NCWLIFE dot com and go to the full episodes tab and then scroll down to Common Sense with Dominick Bonny and find episode 24. But for a first-person in-depth look at what chronic homelessness on the streets of Chelan and Douglas counties looks like, I went out to Jorge and followed him on his rounds as he checks up on the chronically homeless. Let’s take a look.

Welcome back, let’s jump back into my ride-along and interview with Jorge Castañeda.

Stay tuned after the break for the last segment of my interview and ride along with Jorge.

Welcome back, let’s jump back into my ride along with Jorge and meet Juan, who lives in his car on Benton street.

“I’m not here to save anybody. I’m just here to love people.” that’s probably a healthy way to go about the business of reaching out to the chronically homeless. if Jorge were to become too emotionally invested in each individual he encounters, it would surely be a psychological toll that would be too heavy to bear by a single person. I want to give Jorge kudos for taking the initiative to do something proactive and positive and thank him for agreeing to be my guide and showing me a side of Wenatchee, and a population of people, many of us rarely encounter or even acknowledge. Chronic homelessness so often goes in hand with addiction and mental health issues, and as much as we’d like to ignore the problem, we cannot. But his efforts, while noble, are like a band aid on a head wound. we have to address this as a community, a state, and an entire society. That’s why this is the perfect time for all of us to pay more attention to this issue than we normally would because the cities of Wenatchee and East Wenatchee are currently in the process of considering a plan to establish a low barrier shelter and sleep center like the ones in Walla Walla and Moses Lake. East Wenatchee’s hearing is on March sixteenth and Wenatchee’s is on March twenty-fifth. You can find a link to the subcommittee’s representation to Wenatchee city council on February twelfth. And if you would like to know more about what Jorge is doing and support his mission, you can get more information about that in the together Wenatchee Facebook group. The link is in the show notes. Join me next time for Common Sense.