Join Dominick Bonny as he continues his series on addiction, recovery and housing. 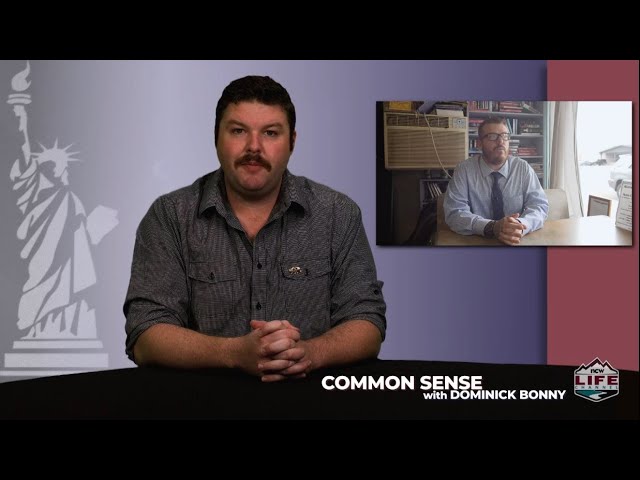 Welcome back to another episode of Common Sense. I’m Dominick Bonny and today I’d like to jump right back into this series on addiction, recovery and housing and follow up with Joseph Hunter, who I introduced in episode 7.

If you watched that episode you will remember that he has gone from a homeless addict and felon living on the streets of Moses Lake to a recovery coach, sponsor, and productive member of society. Since our first interview a lot has changed for Joey, so let’s hear about that in his own words.

Here’s a man who is using his own mistakes, his own struggles with addiction, for the benefit of others. It’s inspiring frankly, and it proves that people can recover, that they can overcome their addictions and be a positive influence on their community. Stay tuned after the break because we’re going to take a look at a landlord-tenant liaison program that helped Joseph and his family find stable housing and take a big step forward in their lives.

Welcome back, my next guest is a man named Billy Bilderback and he’s the Landlord-Tenant Liaison Program Director for the Women’s Resource Center in Wenatchee. It’s the same program that Joseph Hunter and his family used to get access to stable housing. He’s going to give us an overview of the program, tell us how it’s funded, how it protects landlords and gives folks on the edge a path back. He’ll also tell us a little bit about his own experiences with addiction and living on the edge.

By any measure, this is a successful program that is accomplishing its goals! Expecting people to get clean BEFORE they get off the streets is unrealistic. We need to change the way we look at issues like homelessness and addiction and considering housing first models like this is a good place to start. But it doesn’t end there.

After the break we’ll catch back up with Joseph Hunter and see how this program helped he and his family take a big step forward and realize the American dream for which we all strive.

Welcome back, I’d like to dive back into the second part of my interview with Joseph Hunter so he can tell us about his experience with the landlord-tenant liaison program. Here’s Joey:

From homeless to homeowner. From addict to recovery coach. Joseph Hunter PROVES that folks do recover, that anyone can recover and become a productive member of society as well as a loving partner, parent and friend.

Not only that, but a housing first approach saves taxpayers money. According to their website, “Permanent supportive housing has been found to be cost efficient. Providing access to housing generally results in cost savings for communities because housed people are less likely to use emergency services, including hospitals, jails, and emergency shelter, than those who are homeless. One study found an average cost savings on emergency services of $31,545 per person housed in a Housing First program over the course of two years. Another study showed that a Housing First program could cost up to $23,000 less per consumer per year than a shelter program.”

It costs more money and is less effective to make people who are living on the streets jump through a bunch of hoops before they can get access to housing. In fact, many of those hoops become barriers to entry that keep some on the streets for longer than they would be if they had access to a housing first model. Not only is housing first more humane, it’s more practical and cost effective.

But don’t take my word for it. Do your own research! A good place to start is the sources I cite in the show notes of this episode. But don’t stop there! We must evolve the way we consider and approach homelessness and addiction in our communities, or what we get won’t be any different from what we’ve got. Because I don’t know about you, but I don’t see any reason why the richest, most powerful country in the history of civilization shouldn’t be able to solve these problems. We have the tools, the only thing we’re lacking, apparently, is the willpower. And that’s a moral failure rather than a material one.

Join us next time.