Join host Dominick Bonny and learn more about the new makeup of the Wenatchee School Board, new Narcan vending machines and harm reduction tools in Wenatchee and Moses Lake and then the preeminent conspiracy theories in America, Alex Jones, of Infowars infamy. 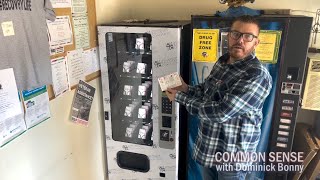 Hello and welcome to Common Sense, I’m Dominick Bonny, and in this episode, we’re going to take a peek at the new Wenatchee School Board, learn about a new harm reduction tool in our community and check in with the font of misinformation and conspiracy theories – Alex Jones – who is having a really bad month. But first, the Wenatchee School Board, which had its first in-person meeting since August on November twenty third. During that meeting the newly elected members were sworn in, including Maria Iniguez, who is the first latina to be elected to the Wenatchee School Board. Ever. In 2021. It’s a step in the right direction, but in a district with a student population that is 50% Latino and 45% white I’d say we’ve still got a long way to go before we’re anywhere close to true representation of a group that makes up half our students. Also notable was the fact that Katherine Thomas, the newest member elected to the board, who suddenly learned how to wear a mask correctly! After an election season that saw Thomas and the other school board candidates on the GOP ticket breaking any rules they wanted to it was almost surreal to see Thomas masked up and complying with the mandates the rest of us mere mortals have had to adhere to during this pandemic and resulting state of emergency. To Thomas’ detractors who might say her capitulation to the Governor’s mask mandate is a sign of her flip flopping or indicative of a fickle constitution that bows to external pressures and lacks political courage, those are actually features, not flaws, of modern Republican party since the Trump takeover. If the Chelan County GOP, or Republican party at large, wanted candidates that showed ideological consistency, common respect, knowledge of governance, public policy and political courage, they probably wouldn’t have spent the last six years kowtowing to a wannabe authoritarian strongman and congenital liar who embodies none of the “traditional conservative” or “family” values the party has spent my entire life saying they champion. Whatever the reason Thomas chose to follow the rules the rest of us have to follow, I’m glad to see her setting an example for the students of the Wenatchee school district, although to tell you the truth I am less worried about the students than I am some of the parents at this point. The other thing to note about the November Wenatchee School Board meeting is that we have a new board president in Martin Barron, who I am sure will do an excellent job. I’ve had the pleasure of getting to know Martin over the past decade or so through my involvement in Rotary here locally. He is exactly what this district needs and we are lucky to have him at the helm of this school board. He’s non-partisan (an attribute rarer than gold these days), a well-qualified financial manager with experience and he can speak Spanish. The balance of power on the Wenatchee School Board might be a bit precarious, but at least the grown up faction seems to have the upper hand – for the time being. But now, let’s head down to the Wenatchee Alano Club and learn about a new Narcan vending machine in our region that is giving those in active addiction, those in trall to opiate addictions, a fighting chance to survive a little longer and get the help they need. As you are probably aware by now, the number of Americans who died of overdoses in the last 12 months has topped one hundred thousand for the first time ever. Joseph Hunter, Victor Estrada, Todd Cordell, and the other leaders of the Central Washington Recovery Coalition, with the help of organizations like Beacon Health and the NCACH, aim to do something about it in our region. That’s where this pilot program and these Narcan vending machines come in. Let’s take a look.

Stay tuned after the break for more!

Hello and welcome back to Common Sense, let’s get back to my interview with Joseph Hunter, a recovery coach and driving force behind this Narcan vending machine pilot program.

After the vending machines arrived in Moses Lake and Wenatchee a few weeks ago they got some media coverage, and the response online from some, while not surprising, was disappointing and ugly. There were many comments along the lines of “Let them die” – those struggling with opiate addictions that is. I won’t dignify or amplify remarks like that on this show, but I did want to make a point of addressing it briefly here today. If you are the type of person who would root against the availability of a lifesaving, relatively low-cost medication that can reverse an overdose in progress at a time when fentanyl-laced opiates are causing death rates among addicts to skyrocket, you should be ashamed of yourself. And if you are so shameless that you would type something to that effect online in a public forum, then you should be studied. And I’m not joking! See I truly believe that one of the ways we got to where we are right now, which is a state of being in which many Americans don’t seem to care how many of our fellow citizens die of preventable disease or preventable overdoses, is due to a lack of empathy. And that, in part, is because we dehumanize each other in order to justify not caring what happens to our fellow Americans. Because if we accepted the fact that every person, no matter what, is a human being with inherent dignity, with a soul, then we could not stand idly by and even refuse to do the bare minimum to limit the death and carnage we have all been witnesses to over the last 22 months – from the overdoses and deaths of despair to the nearly eight hundred thousand Americans we lost to Covid-19 since the pandemic began. For those of us who have not forgotten or forsaken our humanity, which includes the duty to feel empathy for others, it’s a mental and emotional load that sometimes seems too great to bear. And to be clear, it’s not just the deaths and the trauma and pain they leave in their wake – it’s actually the lack of empathy, of common decency, on display by so many – that is the hardest to bear. It’s US historian, curator at the Smithsonian, and author Peter Manseau who spoke to this lack of humanity succinctly on Twitter recently. He wrote quote, “US response to Covid has ultimately been like our response to school shootings: Once we decided unimaginable loss was a price worth paying for the imagined ideal of freedom, the number of deaths ceased to matter. We’d trade a million lives for our need to do exactly what we want.” endquote

From callous comments online to the defiantly unmasked tromping through our local stores, daring minimum wage workers to confront them, it’s clear that the number of people who have died from Covid-19 or succumbed to addiction just doesn’t matter in comparison to these folks’ desire for unfettered “freedom.” But the thing is that unfettered freedom, without any temperance or regard for others, is actually closer to anarchy than liberty.

And that brings us to our last topic for today, Alex Jones, who has had a tough November. Not only did he lose in defamation lawsuits parents of the children who were killed at Sandy Hook brought against him in Connecticut, he and his pal Roger Stone were subpoenaed by the Congressional committee investigating the January sixth insurrection. But who is Alex Jones and why does he matter? Well, I can, and probably will, spend an entire episode on this influencer of American conspiracy theories, but in a nutshell he’s a far right radio show host and conspiracy theorist with a nationally syndicated show broadcast by the Genesis Communications Network. According to Wikipedia, quote “Jones has provided a platform and support for white nationalists, as well as serving as an ‘entry point’ to their ideology.” According to Jones, 9/11 was an inside job, mass casualty shootings like what happened at Sandy Hook Elementary in 2012 was a quote “false flag” in order to justify taking away Americans’ guns, the government controls the weather, Bill Gates is a eugenicist trying to wipe our minorities, and millions of undocumented immigrants illegally voted in the 2020 election. Now if those last two sound familiar, that’s because the former president of the United States made a habit of repeating Jones’ misinformation and propaganda while in office and the hatred Jones espouses for Bill Gates and Dr. Anthony Fauci are repeated daily by those in the anti-vaccine movement nationwide and locally. The reason everyone should know Jones and his incredibly dangerous brand of propaganda and misinformation is because the garbage that comes out of his mouth daily trickles down and is digested by the right-wing media ecosystem and then deposited into the heads of some of our friends and neighbors right here in North Central Washington. If you have the misfortune, as I do, to have friends and family members who have become inculcated with propaganda from rightwing media, you might have heard some of Jones’ misinformation repeated at the Thanksgiving dinner table last week. It’s good that he’s being held accountable, in part, for his actions, but it’s important for all rational American citizens to know who Alex Jones is and what his brand of propaganda sounds like so we can inoculate ourselves against it wherever it rears its ugly head – from the chalk scribblings of anti-vaxxers on our streets to the misinformation repeated by pop pop at the holiday table. This holiday season it’s important to get vaccinated not just against influenza and Covid-19, but also dangerous misinformation spread by those like Jones, who profit off of spreading propaganda, lies and misinformation. If you want to learn more about Alex Jones and Infowars I have included links to articles and info about him in the show notes for this episode. There’s also an Easter egg in there that you might find humorous, or if you’re an Alex Jones fan it might trigger you. To see the transcript of this episode and get the show notes, just go to NCWLIFE dot com and find the “full episodes” tab at the top. Once you click on that just scroll down and find Common Sense. This is episode 51. Join me next time and continue this odyssey through the murky waters of disinformation and propaganda that permeate our modern society. I’m Dominick Bonny and that’s next time on Common Sense.