In this episode host, Dominick Bonny interviews Frank Cone and his son Evan, who is an adult with special needs. He also follows up on a couple of stories, like the happenings at the Chelan County Community Development Department and the clerk at Ernie’s Market who refused service to the CEO of Confluence Health because of Covid politics. 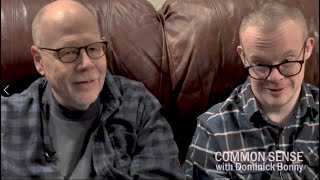 Hello and welcome to Common Sense, I’m Dominick Bonny and in this episode, we’re going to meet Frank and Evan Cone. Evan has special needs and while his mother and Frank’s wife, Patti, is at work the two spend a lot of time together, building Lego sets, getting out for fresh air and hanging out while Frank practices a hobby he has become really good at over the years – photography. He’s one of the best nature photographers in the Wenatchee Valley, and I am frequently in awe of the images he captures. We’ll get to my interview with Frank and Evan in a minute, but before we do I’d like to update you on a couple of stories I have been following up on. First, the drama in the Chelan County Community Development department. If you’re a regular viewer of this show you’ll know I have been following the developments in that department after planning commissioner Ryan Kelso almost lost his seat on the planning board after employees of the planning department alleged he abused his power in a way that constituted a conflict of interest. The Chelan County Commissioners in a split vote retained Kelso on the board and in the immediate aftermath the department’s director, Jim Brown, announced his resignation, citing issues with a single county commissioner as the main reason for his departure. I reached out to Brown with a request for an interview or at least a statement from him about the matter, but he declined, saying in an email that he’s not currently doing any interviews about the topic. So we’ll put a pin in that for now, but I do plan on revisiting the topic because there’s more to this story. And it’s a story that every taxpayer and property owner in Chelan County has a right to know. The other story I told you I would follow up on in the last episode, which was episode 56, titled Rock Steady for those of you who want to look it up on ncw life dot com, was the bizarre tale of a grocery store clerk at Ernie’s Market in Wenatchee who refused service to Dr. Peter Rutherford. The clerk actually filmed a selfie video about kicking Rutherford out of Ernie’s right after she did and posted it to Facebook. That video, not surprisingly, got a lot of attention locally. So I reached out to Ernie’s Market via email and didn’t hear back. I called the market and left a message, but didn’t hear back. I even got the cell phone number of the manager, a woman named Patti, and left a message on her voicemail, asking if Ernie’s management or ownership would like to make a statement or issue an apology to Dr. Rutherford. I never heard back. So I have done my due diligence and given the folks at Ernie’s ample opportunities to go on the record about why they kicked Dr. Rutherford out of their store. At this point the failure to respond and communicate about the incident is a message in and of itself, is it not? So take what you will from the fact that the management and owner of Ernie’s have not responded to my multiple requests for comment on this matter. I am still curious about the incident though, so if you’re watching Patti, please call me back and fill me in! Now let’s go to the home of the Cone family in Wenatchee, meet Frank and Evan, and learn more about what it’s like to be a caregiver to an adult child with special needs.

Stay tuned for more after the break!

Welcome back, let’s get back to my interview with Frank Cone and his son Evan, who has special needs.

Frank and Evan have a special relationship, and I for one think it’s inspirational to see the deep love and care Frank has for his son. Caring for an adult child with special needs must come with its own set of challenges, but I have never seen anything but love and patience on display from Frank and Patti. And I’m glad to get the opportunity to showcase their story. I think folks with special needs and mental disabilities are woefully underrepresented in the media, and their stories are rarely told by news outlets that have their sights set on the politicians, celebrities, and other scoundrels. And I get that to a certain extent. It’s important for us to know what’s happening at city hall, or in Olympia, or in Washington DC. But it’s also important to turn the lens on real people, average people, like Frank and Evan, from time to time. Why? Because there is great beauty there, and lessons to be learned. Evan has a beautiful soul, and it’s inspiring to see his parents’ love and care for him. It’s important because representation matters, and I hope that showcasing Frank and Evan maybe that will show others with special needs that they are not alone. I hope that it will provide inspiration and comfort to other parents of children with special needs. From time to time when the weather is nicer my wife and I take long walks, and sometimes we’ll see Frank and Evan out and about, usually somewhere down by the estuary where Frank can photograph wildlife. One of the things I always feel when I see them together is admiration. Admiration for Frank and Patti and how they provide a stable and predictable environment for Evan. It might not seem extraordinary to you and me on the surface, but for Evan it’s everything. So thank you to the Cone family for inviting me into their home and for telling part of their story. What I hope that you, dear viewer, takes away from this episode is that everyone has dignity and everyone deserves to be loved and cared for, no matter what. I also hope that it makes you consider what it would be like to be the parent of an adult child with special needs, like Evan. By considering that scenario I believe we can build up empathy, and empathy is a key factor in building a happier, healthier and more just community for all of us. That’s all for this episode of Common Sense, in the coming weeks we’ll meet an ultra marathon runner for the second installment of our “Stronger Women” series, and talk to the last director of the Wenatchee Valley Chamber of Commerce about the lessons she learned while at the helm and what the future holds for her. I’m Dominick Bonny, join me next time for more Common Sense.