Dominick Bonny takes a look at a few veteran-owned micro farms in Pateros, Washington. These farms are worked by a group of Army vets who aim to give other veterans the opportunity to engage in “dirt therapy.” Learn about their mission and how they want to connect with the community and support veterans. 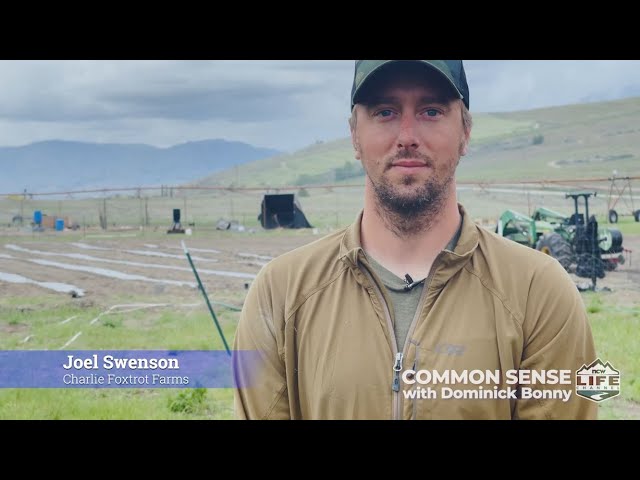 Hello and welcome to Common Sense. I’m Dominick Bonny and today we’re going to take a look at a few veteran-owned micro farms in Pateros, Washington. These farms are worked by a group of Army vets who aim to give other veterans the opportunity to engage in “dirt therapy,” as they call it. I drove up to check out the farms at the Tatley outpost, as these vets have dubbed their donated parcel of land, last weekend after I got connected with Joel Swenson on social media a few months ago. Joel is a former Army combat medic who served in Afghanistan and now his mission is to reach out to other vets, create community and combat isolation as well as the negative mental health effects that come with it. The operation is supported in part by grant funding from the Veteran’s Administration and it’s a model that I hope to see used more in the future, because the fact is that we should be doing everything we can to come up with new ways to support our vets, especially combat veterans. Because the fact is our country has been at war since I was in high school and while we’re very good at training soldiers and sending them to fight, we’re not very good at decommissioning them and giving them the support they need to transition back into civilian life and function in a society not filled with people who are trying to kill them. Having grown up with peers who went to war and came back so broken they were not able to maintain families and relationships or sometimes hold down jobs because of post traumatic stress syndrome and the myriad of mental problems that come with it, including self-medication with drugs and alcohol. The way we as a country treat our veterans is something we should all be ashamed about. The supreme irony and the cherry on top of our neglect and inattention to the troops we love to say we support is illustrated in the way we celebrate the fourth of July, with fireworks that fill the sky. These recreational incindaries that most of us find a charming tradition can actually be a triggering adrenaline-fueled nightmare for combat veterans who have actually been the target of explosives or live fire from the enemy. Once, I sat in my backyard on the fourth of July with a friend who had seen action in Somalia, during the Black Hawk Down incident. He had been a member of one of the teams sent in to help rescue the crew of that downed helicopter in Mogadishu and told me about encountering an enemy combatant in a building they were sweeping. He had been cut off from his squad and the two warfighters seemed surprised to run across one another, as I recall him telling me. That surprise quickly turned into mortal hand-to-hand combat as both soldiers soon realized that only one would walk away from the struggle. In the end, it was my friend who won that knife fight and lived to tell the tale and return home. It’s a story he said he rarely, if ever, tells and by his own admission he was never the same afterward. I think the only reason he told me was because it was the fourth of July, we had made a pretty good dent in a bottle of Jameson whiskey, and he was clearly having a PTSD event triggered by the fireworks bursting overhead in the night sky. He told me that night that many vets hate fireworks. The reason I am telling you that story isn’t because I want us to ban fireworks. I’m telling you that story because until that night I had never considered that fireworks, something I considered a pretty innocent part of celebrating Independence Day, could trigger a panic attack to veterans struggling with PTSD. It made me think about how those of us who have not lived through those traumatic, violent experiences just don’t understand what it’s like. After that, I vowed to do my best to try to understand and empathize with veterans and their experiences. And that’s part of the reason why I was so excited to meet Tim, Joel and Brandon at the Tatley Outpost last weekend and learn more about what they’re doing to create a community for their fellow veterans. Here’s Tim to tell you more about the outpost and the dirt therapy they’re doing up there.

Now let’s meet Joel and learn how he made his way to North Central Washington and what his goal for the Tatley Outpost is.

Stay tuned for more after the break!

Welcome back! Before the break we heard from Joel Swenson of Charlie Foxtrot Farms about their mission and how they want to connect with the community and support veterans. Now let’s meet Brandon, who lives full time at the Tatley Outpost with his wife and what that means to him.

“Just plant something, you will feel better,” he says. Simple words, but very, very wise. And speaking from experience, his words are true. Being outside, getting dirty and growing things makes everyone feel better. And as you heard, what Joel, Branden and Tim are doing at the Tatley Outpost isn’t just for veterans. It’s for the whole NCW community! So if you’re a social media user, follow these three farms on Instagram, it’s a great way to learn more and see what they’re doing at the Outpost. But more importantly buy veteran-made products and produce where you can find them. We check back in with Joel, Brandon and Tim later in the growing season to see how things are going, but in the meantime if you’d like to get connected with them on social media and learn more, you can catch the links to their Instagram accounts in the sources under the transcript for this episode on NCW life dot com under the full episodes tab. Just scroll down to Common Sense with Dominick Bonny and click on episode 30! And if you are really interested in reading more about the real-life experiences of combat veterans I’d start with The Fighters by C.J. Chivers, Generation Kill by Evan Wright and The Naked and the Dead by Norman Mailer. And if you do read those books or have a personal story to tell about your experience with or as a combat veteran, you can share that with me by emailing info@ncwlife.com. I’m Dominick Bonny, join me next time for more common sense.