Dominick Bonny takes a look at a local weekly food bank and health clinic that has been providing an economic lifeline to an underserved but important population in our community – immigrants and undocumented workers. 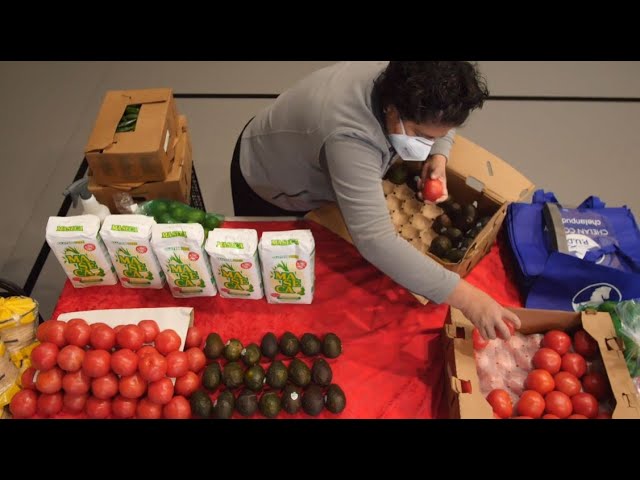 Hello, and welcome to Common Sense, I’m Dominick Bonny and this week we’re going to take a look at a weekly food bank and a health clinic that has been providing an economic lifeline to an underserved but important population in our community – immigrants and undocumented workers. But first, I want to take a moment to talk about media literacy. It’s something that so many Americans struggle with, and it’s not totally their fault either. We have been conditioned and accustomed to seeing opinion columnists and pundits as anchors and news reporters. They are not the same thing. Sean Hannity and Tucker Carlson are not reporters, and neither am I. I am an opinion columnist and this is a news and opinion show. That means I talk about the news and include my analysis and opinion about current events. That’s why there’s a disclaimer at the beginning and the end of this program that says as much. It’s important to pay attention to those things. Now I understand that my last program about the insurrection that Donald J. Trump incited, which resulted in the deaths of five people and the historic and unprecedented second impeachment of an American president, ruffled some features, and that’s ok. But it’s the reason that I wanted to address this issue at the beginning of this episode. I am planning to devote an entire episode to media literacy in the near future, and another to the history of American journalism and the role that columnists and opinion writers played in it, but this episode is dedicated to focusing on a group of people who have stepped up during the pandemic and parallel economic crisis to provide essential information, services, rent assistance and even groceries immigrants in our community who were already on the margins economically and politically, but who are now on the razor’s edge, struggling to pay their bills and put food on the table. I visited the Saturday clinic and food bank and spoke with a few of the organizers, and my first interview with Dr. Karina Vega-Villa, who is a math and engineering professor at Wenatchee Valley College, which is where the clinics have been taking place. Here’s that interview.

Welcome back, while I was at the food bank and free clinic, I spoke with a few of the other organizers, including Teresa Bendito, about why she volunteers her time to help the immigrant and undocumented community in our region, and what unique pressure they are under because of COVID-19 and the total failure by our national government to respond in a competent and humane manner to the crisis. Here’s that interview.

I also spoke with Meleah Butruille, the lead faculty member for the RN to BSN program and one of her students who has been administering flu vaccines and educating the public about their health as a part of her practicum project. Let’s hear briefly from them before we go to another break.

Welcome back, throughout this pandemic and the economic crisis that it has led to, I like many, have had to fight the tendency to feel sorry for myself or angry at people or things outside of my control. But when I get in that headspace I try to remind myself that for so many, things are much worse. I try and think about the old people and those with health problems that make them prime targets for COVID -19, or the undocumented workers, most of whom are deemed “essential workers” on one hand yet have to live their lives in fear on the other. They make up a large minority of the population in our region and in many agricultural areas, yet they find themselves on the margin even more than ever in a crisis like this. Lacking a streamlined, speedy and affordable pathway to citizenship. So they live in a sort of limbo, not even enjoying status as second-class citizens. They have to worry not just about ICE, catching COVID, and diminishing work hours. Now they have to worry about being able to put food on their table and feed their kids. This is a supreme irony since many of them an essential part of the supply chain that puts food on yours and mine.

Throughout this crisis, it’s been interesting to see what people spend their time doing. Some people decided that putting on haircut protests or filing lawsuits that wasted the court’s time and other peoples’ money was a good use of their time and energy. Those folks will be remembered as the fit-throwers and time-wasters they are. But others, like Dr. Karina Vega-Villa, Teresa Bendito, and the other organizers who made this free clinic and food bank a reality for this underserved and overlooked community, I think, will be remembered as the change-agents and philanthropists they are. And I hope that this episode and the other media coverage this program has received will stand as a testament to their charity, humanity and honor. I’d also like to give a shout out to the Wenatchee Valley College for pivoting and using a facility originally designed for athletics to provide a space to provide economic relief and essential healthcare information to our immigrant and undocumented community. Like Dr. Vega-Villa said, this was a coalition effort and if this plucky group of organizers, educators, and activists can make this free clinic and food bank a reality, what is stopping our local elected officials and governments at the city or county level from following their lead? The course has been charted, now it just takes the willpower and courage to follow.

Join me next time for Common Sense.

What is media literacy and why is it important, Common Sense Media

Is Sean Hannity a journalist or not? Here’s why it matters. Washington Post

What is the difference between a reporter, editor, and columnist? The Boston Globe

Did Yellow Journalism Fuel the Outbreak of the Spanish-American War? History.com

The biggest errors the Trump administration made in response to COVID, Fortune

Why Don’t Immigrants Apply for Citizenship? There Is No Line for Many Unauthorized Immigrants, American Immigration Council

‘Get In Line:’ What It Takes To Legally Immigrate To The United States, NPR

How hair became a culture war in quarantine, Vox.com