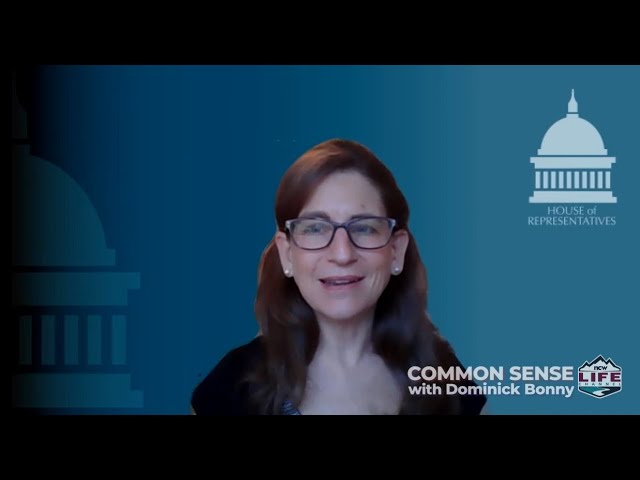 Hello and welcome to Common Sense. I’m Dominick Bonny and today my guest is Washington state representative Tana Senn, who represents Washington’s forty-first district. She’s one of the authors and sponsors of House Bill 1283, which would make the open carry or display of weapons by groups of people with the intent to intimidate a class B felony under the offense of criminal mischief statute. It’s just one bill in a package of bills that are in large part a response to paramilitary groups who have brought guns to the state capital, and out onto the streets of large cities and small towns in our state over the last couple years in order to intimidate lawmakers and dissuade fellow citizens from exercising their freedom of speech and assembly. Let’s get right into the interview.

Stay tuned after the break to hear her response.

Hello and welcome back, let’s jump back into my interview with Representative Senn and hear her response to my question about militias coordinating and communicating beforehand and in real-time in order to intimidate their fellow citizens in public spaces.

“We’re about debate and words. Not violence and intimidation.” Well said. Like I said in my interview, I grew up around guns. Guns can be a lot of fun. They can be an incredibly useful tool for hunting and exterminating pests. One time my stepdad paid a buddy and me a buck a pigeon and we went out on the farm and made ourselves 200 bucks in an afternoon. We probably spent about that much on shells, but we were just farm kids being farm kids. And even though we were kids, we knew that it is wrong to use a firearm to bully or intimidate others. We knew that because we were raised right. We knew guns should not be brought out in order to intimidate those who disagree with us. Last summer, we witnessed a self-styled militia take to the streets of Wenatchee to stalk and intimidate peaceful protesters because they disagreed with their message. The busloads of Antifa rumors were just that, rumors, and any reasonable person understood that it was just a ruse at the time. It was a ruse concocted in order to give an emotionally unstable extremist minority of wanna be Rambos, one of whom is a Douglas County County Commissioner, an excuse to plan and coordinate the systematic intimidation of their fellow citizens. Many of the people who showed up to protest and march in support of Black Lives Matter were minors and some were elderly. Hardly a crack unit of Antifa super soldiers. Yet these cosplaying thugs and goons frightened a young girl so badly she and her grandma, who was in a wheelchair, left the march. And that’s the whole point, wasn’t it? The point was to intimidate people into staying home. One of the responses to me, when I posted about that on social media at the time, was, “Well they shouldn’t bring kids” and “If they were so scared, they should have stayed home.” You shouldn’t bring kids to a peaceful protest in support of equality for all under the law? It’s a peaceful protest, not the Normandy invasion. And not to mention, the militia people brought kids themselves! Their hypocrisy knows no bounds. The only thing that eclipses their hypocrisy is their cowardice. Because if you need a semi-automatic long gun, body armor, and a nine millimeter on your hip in order to protect yourself from some social justice warriors and teenagers you are just that – a coward.

But the plan might have backfired here, because if House Bill 1283 and the other bills in this package pass, these militia bullies could have their rights to bear arms taken away for pulling what they pulled last summer on the streets of Wenatchee. And they only have themselves to blame, because it has been their actions and the actions of other extremists across the state over the last few years that has swayed public opinion against them. According to recent polls from King 5 a majority of Washingtonians agree that opening carrying during protests and demonstrations should not be allowed. Even a majority of Eastern Washingtonions, forty-seven percent of those surveyed, agree that opening carrying at protests should not be allowed.

If you support common sense measures to curb private paramilitaries from disturbing the peace and intimidating others in our region, I encourage you to let our state lawmakers like Senator Brad Hawkins, Representative Keith Goehner and Representative Mike Steele know that you support House Bill 1283. Their contact information is in the show notes of this episode, but they can also be easily found with a quick Google search.

I’m Dominick Bonny. Join me next time for Common Sense.

Good People with Guns? More like a Paramilitary with Dubious Intent, Medium: https://medium.com/@DBonny/good-people-with-guns-more-like-a-paramilitary-with-dubious-intent-8d19450ab49c

57 GOP State And Local Officials Were At The Capitol Insurrection, The Huffington Post: https://www.huffpost.com/entry/57-gop-officials-at-capitol-insurrection_n_6026e5e2c5b6f88289fb90a6

More than 250 people have been charged in the Capitol insurrection so far. This searchable table shows them all, Yahoo News: https://news.yahoo.com/most-arrests-capitol-riots-misdemeanor-225235647.html