Jacob Wyeth came through for Wenatchee with a three-run home run and a double. Tino Bethancourt was 2-for-3 with 2-runs and 2-RBi’s while Cameron Liss was dominant on the mound. The Washington State Cougar improved his record to 2-and-oh by going 5-innings and allowing no-runs on 3-hits with 8-strikeouts.

Going back to Saturday, Skylar Hales and three other pitchers combined on a 6-hit shutout as the AppleSox beat Cascade Collegiate 9-nothing. Garrett Cutting was 2-for-2 with a run while Luc Stuka hit a 2-run home run.

And the weekend sweep began on Friday night, when Wenatchee came back from a 5-1 deficit to win 7-to-6 with some late-inning heroics. The rally began in the bottom of the 5th of the shortened, 7-inning game with Wenatchee trailing 6-to-2. Eric Granstrom and his Dad, Dave, had the call on NCWLIFE… 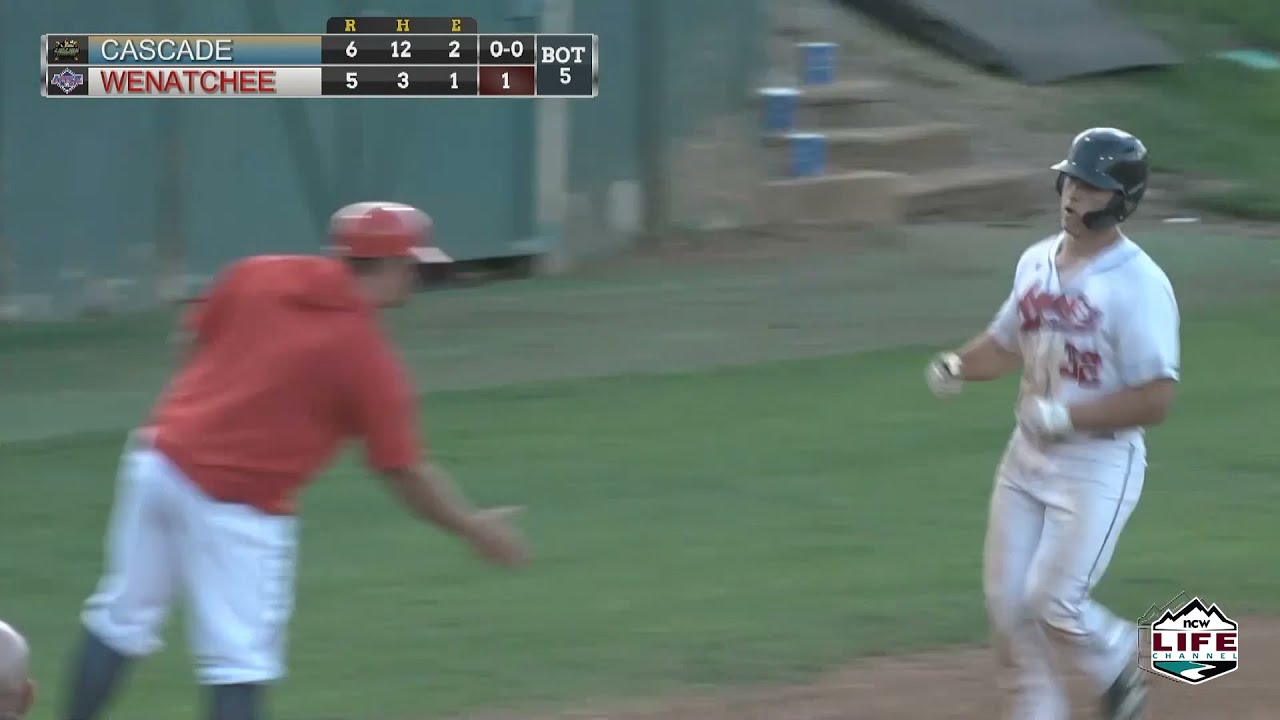 Wenatchee has the day off today before getting back into league play tomorrow night at Walla Walla.

In other West Coast League play Sunday, Ridgefield’s top three batters in the order collected 9-base hits and scored 6-runs as the Raptors beat Highline 9-to-2.

Riley Way was 2-for-3 with a run and an RBI to lead Corvallis to a 3-2 win over Portland. Brock Townsend earned the victory on the mound, going 6-innings of 1-run ball with three strikeouts.

Former AppleSox Seth Kuykendall continues to pitch well for Yakima Valley. He went 7-innings Sunday, allowing 1-run on 3-hits with 5-strikeouts as the Pippins beat Cowlitz on the road 2-to-1. Willie Lajoie’s 2-run home run in the top of the 1st proved to be the difference.

Bryce Matthews and Carson Crawford hit back-to-back solo home runs in the 8th to lead Port Angeles to a 4-3 win over Walla Walla.

Emilio Corona hit a solo home run and Luis Aviles a three-run shot as Bellingham beat Bend 11-6. Corona ended up 3-for-5 at the plate with 3-runs and an RBI.

Taking a look at the second-half standings in the West Coast League, Wenatchee trails Walla Walla by two games for the final playoff spot. Port Angeles is a half-game back while Bellingham is a game back.
Ridgefield is leading the South at 5-and-1 while Corvallis is already locked into the playoffs with the first-half win.

The entire league has the day off today. Coming up tomorrow, as we mentioned, Wenatchee plays at Walla Walla. Bend is at Yakima Valley. Port Angeles welcomes Ridgefield. Portland is at Cowlitz. And Bellingham takes on the Northwest Star Academy.

Gilbert went 5-and-a-third innings to earn the win, allowing 2-runs on 4-hits with a career-high 9-strikeouts. Manager Scott Servais was all smiles after the win…

Seattle has the day off today before traveling to Colorado Tuesday.

In other American League West action Sunday, Toronto swept a doubleheader from Texas 5-0 and 10-0.

Carlos Rodón and two relievers combined on a 1-hit shutout of Houston in the White Sox 4-0 win. Rodón struck out 10 in 7-innings to earn his 8th win of the season.

Bradley Zimmer was 3-for-5 with a home run and 3-RBI’s to lead Cleveland over Oakland 4-to-2.

Seattle has crept within 6-games in the American League West standings and are just 2-and-a-half back in the Wild Card race behind Tampa Bay and Oakland.

Thunder in the Valley big success at WVSO

A familiar name topped the podium once again in the Economy Midgets as Graham’s Nick Larson claimed another win at WVSO. Buckley’s Rebel Jackson, Jr. was 2nd and Fife’s Randy Schaaf 3rd.

Wenatchee Valley’s Super Oval is off until August 7th for Mr. Dizzy Night.