The game had all the earmarks of another loss when AppleSox starter Keegan Romig couldn’t get an out in the first inning, allowing four runs on three hits with two wild pitches and a hit batsman. But in baseball, you can never judge a game by its first inning.

Trailing 7-nothing in the 4th, Wenatchee began its comeback with a four-run inning highlighted by Kodie Kolden’s 2-run single.

After Ryan Altenberger’s RBI-triple in the 5th, the AppleSox struck for four more runs in the 6th to cut the Sweet’s lead to 10-9.

In the 7th, Quinn Ayeres stepped to the plate with one on, nobody out and a 3-2 count… 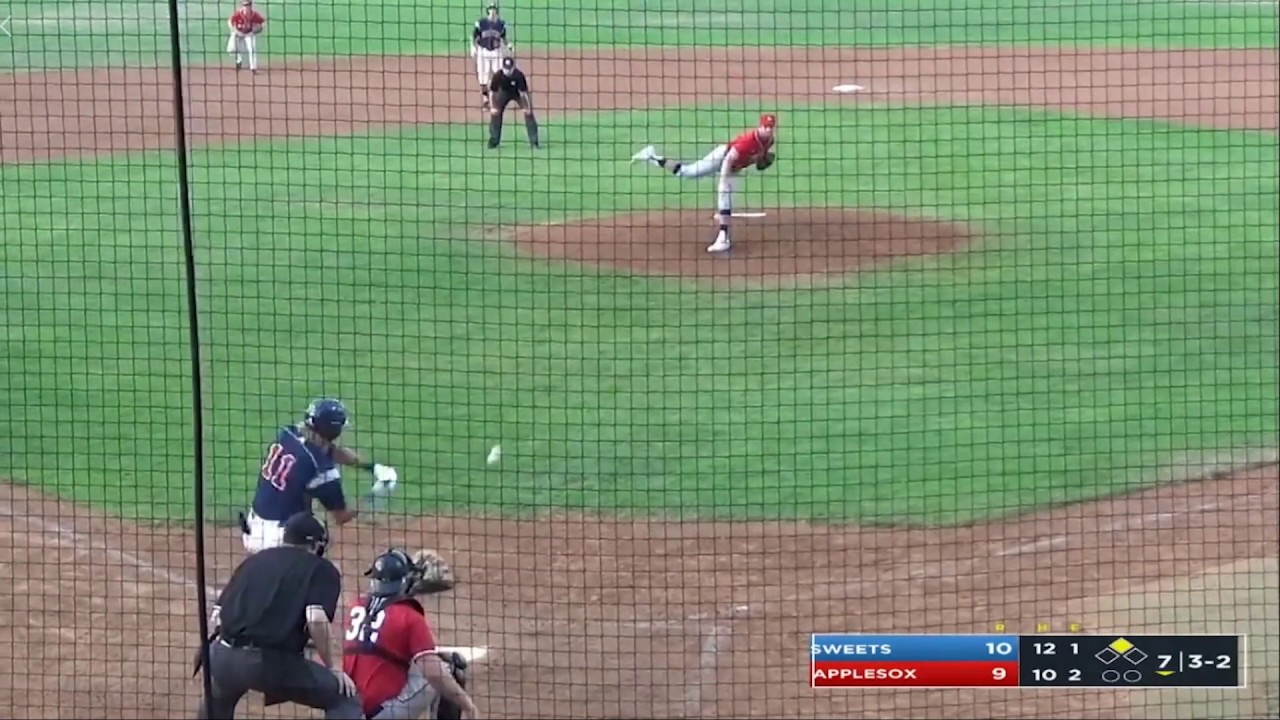 Thanks Joel. The AppleSox improved to 4-and-8 with Sunday’s win and handed Walla Walla its first loss of the season in 9-games.

Troy Viola went 4-for-6 at the plate with a 3-run home run to lead Bellingham to a 19-2 blowout win over Yakima Valley. The Bells exploded for 8-runs in the 5th and another 7 in the 8th to improve to 8-and-4 on the season.

Tevita Gerber and two relievers held Cowlitz to 1-run on 3-hits with 7-strikeouts as Corvallis shut down the Black Bears 6-to-1.

Steve Ramirez hit a walk-off single in the bottom of the 9th to score the winning run as Ridgefield knocked off Port Angeles 8-to-7.

Jake Jarvis hit a 2-run double and Deron Johnson earned a bases-loaded walk in a 3-run 5th inning and Bend shut out Portland 3-nothing. Nick Hernandez and three relievers held the Pickles on a 2-hit shutout as the Elks improved to 5-and-4.

Tyler Grissom’s walk-off, RBI-double in the bottom of the 11th helped Kelowna edge Victoria 4-3. The win helped the Falcons salvage the final game of the three-game series.

Yakima Valley went into the weekend with the lead in the West Coast League’s North Division. They emerge from the weekend in a three-way tie for second…

Bellingham sits in first place after a weekend sweep of the Pippins at 8-and-4. Yakima Valley, Port Angeles and Victoria are all tied for second at 6-and-5. Wenatchee is in 5th place at 4-and-8. Kelowna is in last place with a record of 2-and-7.

Mariners come back to beat A’s

Mike Leake earned his 6th win of the season, going 7-innings and allowing 3-runs on 7-hits with 7 strikeouts. Malix Smith was 2-for-5 at the plate including a 2-run home run as Seattle took two of three from the Athletics over the weekend.

The Mariners are back home tonight for the first of three games against Kansas City. Tommy Milone will get the start for Seattle against the Royal’s Danny Duffy. First pitch is at 7:10.

Brandon Lowe was 2-for-3 with a home run to lead Tampa Bay past the Angels 6-5. Mike Trout hit a 2-run home run for Los Angeles, his 19th of the season.

Freddy Galvis led a 14-hit attack, going 3-for-5 with a 2-run home run and 3-RBI’s as Toronto embarrassed Houston 12-nothing.

US downs Chile 3-0 in World Cup

Julie Ertz scored the other goal as the U-S improved to 2-and-oh in Pool play. Sunday’s win helped the US clinch a spot in the round of 16 and sending the Americans on to Thursday’s game with Sweden with a chance to win the group.

Woodland holds off Kaepka for US Open Title

The 35-year old from Topeka, Kansas shot a final-round 69 Sunday. His round included an incredible 3-wood on the 14th; a chip-off-the-green to save par on the 17th; and a 30-foot birdie putt on 18 for the three-shot win.

Skyhawks fall to Horsemen in Idaho

The win improved the Horsemen’s record to 10-and-oh while the Skyhawks dropped to 4-and-6. Wenatchee Valley will play at winless Tri-Cities Saturday night at 7 o’clock.