This three-game series completes a home-and-home run following three games in Bend last weekend. After falling in the opener Friday 11-to-1, Wenatchee bounced back to take the next two 8-4 and 4-2.

“Voice” of the AppleSox, Joel Norman, was a guest with Dan this morning on Wake Up Wenatchee Valley. Norman talked about a few players who’ve impressed him so far this season… 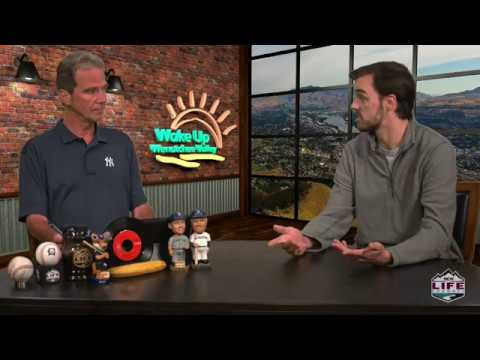 Tonight is the AppleSox’ first-ever bobblehead giveaway, with the first 400 fans receiving a Coyote Bobblehead. First pitch tonight is at 6:35.

Jonny Weaver’s 3-run home run in the 7th inning was the difference as Ridgefield came from behind to beat Victoria 4-to-3 at Royal Athletic Park. Michael Yourg was also 3-for-4 at the plate to pace the Raptors.

Matthew Henckel and two relievers combined on a 4-hitter as Bellingham stopped Walla Walla 4-to-1. Christian Dicochea led the Bells offensively, going 2-for-4 and driving in 3-runs.

Lee and Celestino Players of Week

The West Coast League’s Moss Adams Player of the Week and Pitcher of the Week, as announced by league commissioner Rob Neyer, are Cal Poly San Luis Obispo infielder Brooks Lee of the Corvallis Knights and Incarnate Word pitcher Aaron Celestino of the Victoria HarbourCats…

Lee was on fire at the plate this last week for the Knights. In six games he went 12-for-23 with 11 RBIs. Lee selected by the San Francisco Giants, however, the incoming freshman will head to college and play for his dad at Cal Poly. His dad, Larry Lee, is going into his 18th season as the head coach of the Mustangs…

Celestino was masterful over two outings for the HarbourCats this past week. Celestino tossed 10 scoreless innings, allowing just one run on six hits while striking out 14 batters.

It seems impossible to believe that there’s not something going on with the Major League Baseball this season. In last night’s T-Mobile Home Run Derby, Toronto rookie Vladimir Guerrero, Jr. hit 91 home runs!!! That’s 30-more than the record set by Giancarlo Stanton in the 2016 contest. AND, Guerrero Junior didn’t win!

New York Mets rookie Pete Alonso topped Guerrero in the final 23-to-22. Alonso took home $1 million for winning the Derby, and he had pledged that he would donate 5% of his winnings to the Wounded Warrior Project and another 5% to the Tunnel to Towers Foundation if he emerged victorious.

Everyone will be talking around the water cooler today about the second round between Guerrero, Jr. and the Dodger’s Joc Pederson. Both hit 29 long balls to force a one-minute swing-off.

“They own Rawlings, and you’ve got (MLB Commissioner) Manfred up here saying it might be the way they center the pill. They own the (bleeping) company. If any other $40 billion company bought out a $400 million company and the product changed dramatically, it’s not a guess as to what happened.”

“We all know what happened. Manfred the first time he came in, what’d he say? He said we want more offense. All of a sudden he comes in, the balls are juiced? It’s not coincidence. We’re not idiots.”

Researchers have said the 2019 Major League ball has fewer seams and a more-centered pill, which has reduced drag on the ball. Less drag means more velocity, which means more home runs.

Whether more home runs and more offense is better for baseball will be told in the coming years. 2019 will be remembered as the year of the home run.