Earlier this month, NCWLIFE Channel’s Eric Granstrom sat down with each of the Top 10 Apple Blossom Royalty Candidates to get to know them a little better. Meet Sophia Hernandez… 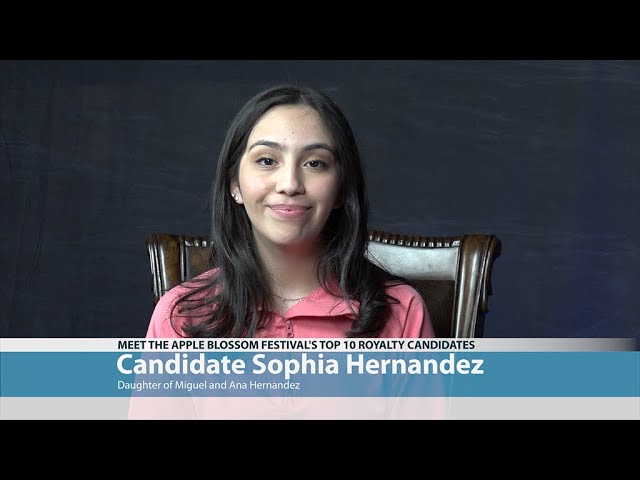 Sophia is the daughter of Miguel and Ana Hernandez. Sophia is a co-president for her school’s varsity mariachi band, Mariachi Huenachi, secretary of her school’s ASB, and president for her school’s Speech and Debate team. She holds a membership in clubs offered at her school such as M.E.Ch.A., Key Club, AVID, and Honors Society. Sophia has spent her last two summers working in the fruit packing industry at Piepel Premium Harvest and is currently employed as a Sales Associate at Old Navy. In her spare time, she enjoys painting, listening to music, and learning about astrology. After graduation, Sophia plans to attend a four-year university and major in political science or education.

Sophia’s favorite TV show is Never Have I Ever and her favorite movie is Spider-Man: Into the Spider-Verse. Her favorite song is “LUCY!” by Jaden Smith and her favorite book is The Sun and Her Flowers by Rupi Kaur. She is most inspired by her family and her most treasured keepsake is the bracelet wrapped around her left wrist.

Sophia’s favorite thing to do in the Wenatchee Valley, besides Apple Blossom, is painting by the riverside and trying new drinks from local coffee shops. Her proudest moment in life was auditioning and joining Mariachi Huenachi. If Sophia could trade places with anyone for the day, she would trade places with Ariana Grande. Sophia feels she should represent the Wenatchee Valley because she is devoted to being a wonderful role model for all young girls and being involved in the community.