Earlier this month, NCWLIFE Channel’s Eric Granstrom sat down with each of the Top 10 Apple Blossom Royalty Candidates to get to know them a little better. Meet Kaylynn Schmitten… 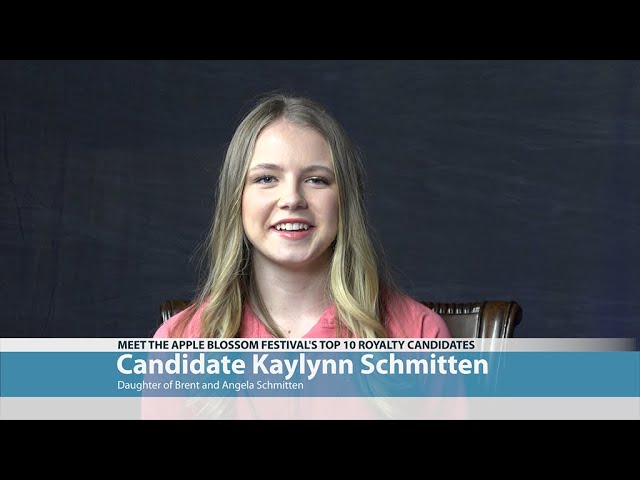 Kaylynn is the daughter of Brent and Angela Schmitten. Kaylynn runs track and plays volleyball and basketball where she was a team captain. She is involved in several leadership roles such as a Link Leader, Senate, National Honors Society, and is the Publicity Officer of Eastmont’s Sports Medicine program. Kaylynn has volunteered and worked many basketball camps and tournaments as well as volunteering at her church, delivering mobile meals, and helping teachers prepare their classrooms. Kaylynn works at the Wenatchee Golf and Country Club. In her spare time, she enjoys baking, hiking with her dogs, working out, attending youth group, and spending time with her family and friends at Lake Chelan. After graduation, Kaylynn plans to attend Washington State University to study kinesiology and pursue a degree in physical therapy.

Kaylynn’s favorite TV show is FRIENDS and her favorite movie is Forever My Girl. Her favorite song is “Rise Up” by Andra Day and her favorite books are the Hunger Games series by Suzanne Collins. She is most inspired by her mom and her most treasured keepsake is the cross necklace her parents gave her after she was baptized.

Kaylynn’s favorite thing to do in the Wenatchee Valley, besides Apple Blossom, is enjoying the outdoors and all the activities the valley has to offer, from skiing at Mission Ridge, hiking numerous trails, and spending time with friends by the river. The proudest moment in her life was being able to play sports again after recovering from her ACL and meniscus surgery. If Kaylynn could trade places with anyone for the day, she would choose her Great Grandma. Kaylynn feels she should represent the Valley and Apple Blossom festival because she has high morals and values, is a positive influence and role model for young girls, and has strong multi-generational family ties within the Valley.